Can you guess the biggest American company in April 2010? In that month, when oil traded at $102 a barrel, it was Exxon Mobil (XOM). As suggested by that example, the list of the largest US firms has changed markedly over the subsequent decade. The movement reveals not only shifts in corporate fortunes, but also evolving investor attitudes.

Below is the list of the 10 largest American companies from April 2010. The chart contains each company’s stock-market capitalisation, its price/income ratio, and its Morningstar investment style. (By price/income ratio, I mean the standard price/earnings ratio, but with the earnings adjusted by removing extraordinary items. Morningstar calls the resulting figure “normalised income”).

Were these 10 stocks to form a fund, that portfolio would be surprisingly well-diversified. The companies operated in six sectors. Technology, consumer goods, and financial businesses each held two slots, as did conglomerates in the form of General Electric (GEC) and Berkshire Hathaway (BRK.B). The energy giant Exxon Mobil and retailer Walmart (WMT) rounded off the group. The list also varied by investment style, with two growth companies, five classified by Morningstar as blend, and three value stocks.

Aside from Apple (AAPL) and Berkshire Hathaway, no stock traded ona price/income ratio exceeding 20. Investors at the time were carefully optimistic. Their optimism was demonstrated by their willingness to embrace various industries and investment styles. They believed that many approaches might succeed. However, they were reluctant with their wallets.

So much for industry diversification! In 2010, there were two technology companies among the top 10 stocks, with the industry accounting for 24% of those assets. Today, the leaders’ list has five tech firms that possess 74% of the top 10’s total. 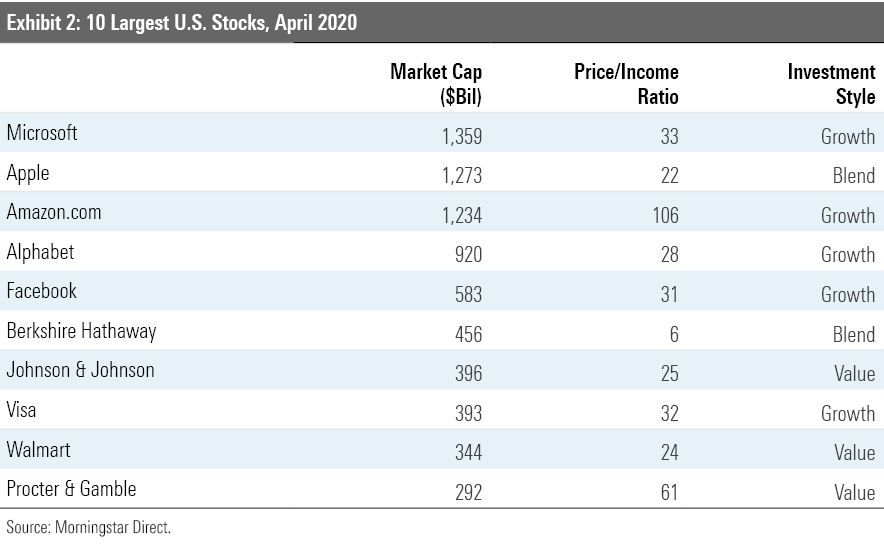 The cost to buy those leaders has skyrocketed. A decade ago, eight of the top 10 companies traded at price/income ratios of less than 20. Today, eight now are above that mark, including all five of the tech companies. To be sure, today’s valuations are nowhere near New Era levels. By those standards, only Amazon.com (AMZN) looks steep. But there are few bargains as well.

Another way of evaluating the giants is to compare them against the other end of the marketplace: the smallest stocks.

I have defined the “largest” stocks as being the 10 biggest, as illustrated above, and the “smallest” as being issues that land outside the top 500, but with market caps exceeding $100 million. (Extending the search to businesses valued at less than $100 million increases the chance of data errors without materially improving the analysis).

I then asked two questions. First, what percentage of total stockmarket capitalisation did each of these two groups of stocks command? Second, what portion of total income did they contribute? Let’s look at 2010 first.

A decade ago, the 10 largest firms held 17% of stock market capitalisation, while their share of normalised income was 20%. Thus, as measured by income, the giants traded at a slight discount to the overall marketplace. (A higher blue bar indicates a discount, while a higher orange bar depicts a premium.) In contrast, the smallest companies attracted 12% of the investment capital but delivered just 1% of income.

For the most part, investors in 2010’s smaller companies weren’t expecting high ongoing growth rates. Rather, they were anticipating a burst, as the economy returned to normality.

The recession that followed the global financial crisis had made many smaller businesses temporarily unprofitable. As a result, the group’s aggregate income was very low. For every firm that had turned a profit through the very difficult year of 2009, another had not.

Should the economy subsequently recover, as appeared likely in April 2010, these relative weaklings would benefit more than would stronger businesses. Investors in 2010 believed enough in the economy to invest in companies that were currently unprofitable. However, they did not pay heavily for the privilege of doing so. In April 2010, the price/book ratio for Vanguard Small Cap Index (NAESX), which held a similar list of the smallest stocks, was a modest 1.6.

The 10 largest companies today hold 23% of the stock market’s assets, with the top five boasting 17%. Their share of income remained just about constant, declining to 19% today from 20% in April 2010. In short, the behemoths went from being valued at slightly below-market prices to commanding a premium.

Smaller companies behaved as investors had expected. Their income came roaring back, from comprising just over 1% of the market’s total to a healthy 15%. In dollars, that meant a jump to $236 billion in combined normalised income from a mere $7 billion. That was still short of the $291 billion in normalised income recorded last year by the 10 largest businesses – an average of $29 billion each! – but a great improvement from where they had begun.

The stock-market capitalisation for the smallest companies also grew, to 15% from 12%. In aggregate, such stocks trade at neither a premium nor discount to other US stocks – except for the behemoths atop the leader board, that is.

If 2010’s attitude was carefully optimistic, today’s mindset is warily pessimistic. No longer do investors expect stronger near-term growth for the broad marketplace than for the very largest firms. On the contrary, they are increasingly showing that they wish to own the few companies that already dominate their businesses, rather than take their chances on the many firms that do not.

Implicit in this expectation is that inflation will remain low, interest rates subdued (rising interest rates are particularly damaging to growth stocks), and overall economic growth sluggish. If some of the stocks atop today’s leader board look expensive, that is not because investors are giddy. Quite the contrary – those valuations reflect their willingness to pay a premium to achieve relative safety.

John Rekenthaler has been researching the fund industry since 1988 and is now a columnist for Morningstar.com and a member of Morningstar’s investment research department.

Google is in advanced talks to buy a stake in Reliance Industries Ltd.’s digital arm Jio Platforms Ltd., according to people familiar with the matter.

The U.S. technology company has been discussing an investment of about US$4 billion, the people said, asking not to be identified because the information is private. An announcement could come as soon as the next few weeks, according to the people.

Details of the potential deal could change, and negotiations could still be delayed or fall apart, the people said. Representatives for Google and Reliance didn’t immediately respond to requests for comment.

Google would join Facebook Inc. and a slew of private equity firms piling into billionaire Mukesh Ambani’s technology venture, which has already attracted more than US$15 billion of investments in just a few months. An arm of Qualcomm Inc. was the latest in Jio’s growing list of high-profile investors, who also include Silver Lake Partners and Mubadala Investment Co.

Shares of Reliance Industries pared losses in Mumbai on the Bloomberg News report. The stock slipped about one per cent as of 2:42 p.m. local time, outperforming a 1.8 per cent decline in S&P BSE Sensex index. Reliance shares have more than doubled since a low in March to a record on investments into Jio.

On Monday, Google said it plans to spend US$10 billion over the next five to seven years to help accelerate the adoption of digital technologies in India. The amount could be put into partnerships and equity investments among others.

Sundar Pichai, who was born in the country and is now chief executive officer of parent Alphabet Inc., said the outbreak of the coronavirus has made clear the importance of technology for conducting business and for connecting with friends and family.

Google, founded in 1998 in Silicon Valley, entered India six years later with offices in Bangalore and Hyderabad. The India business has since grown into one of the company’s most important. The country now has more than 500 million internet users, second only to China, with growth that has drawn all the American technology giants.

In the last decade, Google has successfully launched several products in India, including a Google internet Saathi service to bring women in rural areas online and its popular Google Pay service.

–With assistance from P R Sanjai

GLX is among a handful of companies using web-based trading to modernize the world of physical commodities and help deepen liquidity. Since creating its online LNG auction hub, the Perth, Australia-based company has shifted toward helping customers create their own digital trading systems.

Shell is the highest profile investor in GLX, which also include Australia’s Woodside Petroleum Ltd. and Malaysia’s Petroliam Nasional Bhd. It dominates global LNG trade, handling about 22% of the world’s volume, according to Bloomberg Intelligence. Neither Shell nor GLX would disclose the value of the investment or size of the stake.

“This digital platform is a natural step in the continued evolution of the global LNG market and as a leading LNG player, we are keen to be part of this,” Steve Hill, an executive vice president for Shell, said in a statement. “The sophistication of the GLX software in combination with the high caliber and quality of the management team gives GLX a strong base for the future.”

Founded in 2015, closely held GLX has about 23 employees and is trying to grow to 40 in the next year, Chief Executive Officer Damien Criddle said by phone. It has about 75 companies signed up, and revenue from subscriptions is up approximately 600% year-on-year and is “in the seven figures,” he said, without providing further details. The company isn’t profitable yet as it focuses on growing and eventually expanding into other commodity sectors.

Criddle said the company’s shift away from controlling its own online LNG marketplace and toward helping companies build their own has resonated with traders, who prize the privacy of their deals.

“We’re digitalizing the LNG chain, but we’re not standing in the middle collecting data,” Criddle said. “What became clear to us is that while our customers like data, they don’t like sharing their own data, and we respect that.”

BRASILIA (Reuters) – Brazil’s Petrobras said on Monday it is again eligible to receive investments from Norway’s largest pension fund, KLP, which had blocked investments in the state-owned oil firm following revelations of a sprawling corruption scheme.

KLP did not immediately respond to request for comment.

Operation Car Wash uncovered Brazil’s largest-ever corruption scheme in which hundreds of politicians and businesspeople were implicated in exchanging bribes for public contracts with Petrobras.

In a 2016 statement announcing its exclusion of Petrobras from its portfolios, KLP said it had 33.74 million NOK ($3.57 million) invested in Petrobras shortly before the decision was made.