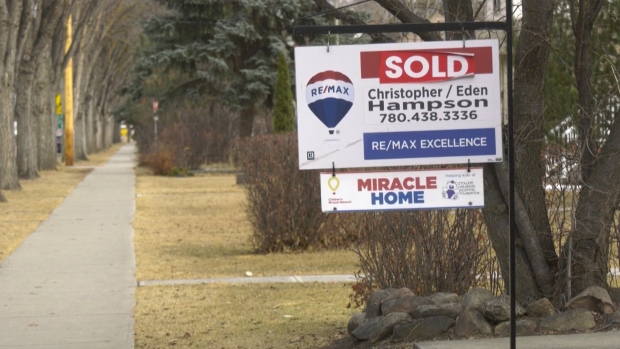 EDMONTON —
If a global pandemic was supposed to cool down Canadian housing markets, it seems no one told buyers in several cities, Edmonton included.

As prices for homes in Alberta’s capital continue to rise, the city joins the likes of Toronto, Ottawa, Hamilton, Halifax, and Moncton, which can all be labeled ‘seller’s markets.’

Canada Mortgage and Housing Corp. (CMHC) said Thursday that those Ontario and Atlantic cities have the highest risk in the country of market vulnerability.

Edmonton has yet to be tagged with that distinction, but some in the know fear it could be heading in that direction.

Osis isn’t the only one with that occupational observation.

Edmonton realtor T.J. De Villa tells CTV News Edmonton — with many young renters having saved enough for a down payment and now poised to upsize to larger accommodations – he’s anticipating a busy summer.

“Now more buyers are coming on and as the interest rate goes up, what they’re pre-approved for might go down.”

Statistics released by the Realtors Association of Edmonton last month showed residential sales in the greater Edmonton area were up 52.1 per cent compared to February, 2020.

Of course, as demand for single detached homes increases, so too do prices.

On average a single detached home in Edmonton will run you 2.6 per cent more now than this time last year. That’s still well below pre-recession levels.

Overall home sale prices in Edmonton, including condos and duplexes have increased 7.5 per cent year over year.

“Although it’s a seller’s market, there are some people who are trying to sell way over what they’re assessed and that’s just because that’s’ what they bought it for,” said De Villa.

The housing demand that kicked off 2021 is actually a continuation of numbers seen coming out of the previous year.

De Villa says the wave in Edmonton might continue, but not necessarily.

While some cities in the eastern part of the country could already be moving into ‘bubble’ territory, De Villa warns that with the current state of the economy, mortgage deferrals and high unemployment, Edmonton might not be far behind.

“Everyone’s out buying homes. Everyone’s busy,” he said. “It’s gotta stop somehow. What goes up must come down, right?”