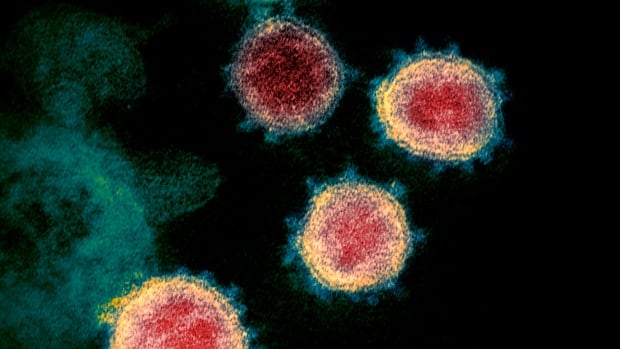 A surge in COVID-19 infections and variant cases in Alberta continued Sunday with reports of an estimated 950 new cases, and 600 new variant cases.

Preliminary data released by the province marked a new daily record of cases involving variants of concern, which now account for about 38 per cent of active cases.

On Saturday, Alberta had reported an estimated 550 additional cases of variants of concern after Dr. Deena Hinshaw, the province’s chief medical officer of health, warned of a “significant” COVID-19 outbreak in Alberta involving the variant first found in Brazil, known as P.1, linked to a returning traveller.

An Alberta Health Services spokesperson said they could not confirm Sunday whether the traveller had travelled internationally or domestically.

“We will update Albertans tomorrow when we have more details available,” AHS spokesperson Tom McMillan said in an email Sunday. Alberta Health has not revealed the location of the variant outbreak and number of cases connected.

Provincial labs completed about 11,200 laboratory tests for the virus on Saturday, with a positivity rate of eight per cent.

The province is only reporting preliminary data over the Easter long weekend, but will have full data available Monday.

The last full update on Thursday saw 292 patients in hospital being treated for the disease, including 59 in intensive care unit beds. The number of active cases in the province was 8,653 — more than double a low of just over 4,000 in February and the highest count since Jan. 25.

It’s not known how many, if any, new deaths from COVID-19 were reported in the previous 24 hours as they were not included in Sunday’s preliminary update.

As of Thursday, the province had seen 1,994 deaths from COVID-19 since the beginning of the pandemic.

About 8,000 vaccine doses were administered Saturday, Hinshaw said, bringing the provincial total to an estimated 693,000 doses to date.

TORONTO (Reuters) – New cases of COVID-19 in Canada‘s most populous province could rise more than six fold, topping 30,000 per day by early June if public health measures are weak and vaccination rates remain flat, a panel of experts advising the province of Ontario said on Friday.

Even if measures to control the virus are “moderate,” the number of patients in Ontario ICUs could reach 2,000 in May, up from 695 on Friday.

The College of Physicians and Surgeons of Ontario told doctors last week they may soon have to decide who can and cannot receive intensive care.

The delays, first announced on Friday when Canada said Moderna would be delivering only about half the planned 1.2 million doses by the end of April, come as Switzerland’s Lonza ramps up three new production lines to make active ingredients for Moderna vaccine supplies outside of the United States.

“The trajectory of vaccine manufacturing ramp-up is not linear, and despite best efforts, there is a shortfall in previously estimated doses from the European supply chain,” Moderna said in a statement.

Lonza didn’t immediately return a phone call and email seeking comment on any issues in its production.

(Reuters) -Moderna Inc said on Friday a shortfall in COVID-19 vaccine doses from its European supply chain will lead to a delay in deliveries to some countries including Canada.

The drugmaker would be delivering only 650,000 doses by April end as opposed to 1.2 million, Canada‘s Procurement Minister Anita Anand said in a statement.

She said one to two million doses of the 12.3 million doses scheduled for delivery by Moderna in the second quarter would be delayed until the third.

Moderna officials in Europe did not immediately comment on the reason for the delays or give the total number of countries that would be impacted.

“Vaccine manufacturing is a highly complex process and a number of elements, including human and material resources have factored into this volatility,” said Patricia Gauthier, an executive at Moderna Canada.

Moderna has been aiming to deliver 700 million to 1 billion doses of the COVID-19 globally this year, including from plants in Europe and the United States.

Swiss contract drug manufacturer Lonza makes active ingredients for Moderna’s vaccine in Visp, but it was still ramping up three new production lines that once operational would be able to produce 300 million shots annually.

The current supply, demand and distribution landscape has led the drugmaker to make adjustments in the expected second-quarter deliveries, Gauthier said.

(Reporting by Manas Mishra in Bengaluru, Allison Martell in Toronto and John Miller in Zurich; Editing by Arun Koyyur)