Even without any new iPhones, Apple (NASDAQ:AAPL) just reported a slew of records in its fiscal fourth-quarter earnings release yesterday. The iPhone 12 and 12 Pro were unveiled earlier this month, after the Mac maker had already closed the books on the quarter, but strength across other parts of the business helped partially offset the decline in iPhone revenue.

Here’s everything you need to know about Apple’s Q4 results.

Every non-iPhone segment crushed it

Revenue came in at $64.7 billion, a cool $1 billion ahead of the consensus estimate. That translated into net income of $12.7 billion, or $0.73 per share, topping the $0.70 per share in profits that Wall Street was expecting. Remember that Apple did a 4-for-1 split in August, which is why that EPS figure may look light.

As expected, iPhone revenue declined by over 20% to $26.4 billion as customers anxiously awaited the new models. The wholesale shift to remote work and learning has driven a broad boom in demand for laptops and tablets, which pushed Mac and iPad revenue to all-time records. Mac revenue was $9 billion while iPad revenue was $6.8 billion, despite the Cupertino tech giant facing supply constraints for virtually all major products, an imbalance that persists to this day and now includes the new iPhones.

Services revenue hit a new record at $14.5 billion, and that segment has now generated $54.8 billion in trailing-12-month (TTM) sales. In other words, Apple has handily beat the goal of doubling services revenue it laid out so many years ago. There are now 585 million paid subscriptions being billed through the company’s various platforms, putting another goal set by CFO Luca Maestri earlier this year — hitting 600 million paid subscriptions by the end of 2020 — within easy reach.

As part of Apple’s ongoing efforts to shift attention away from plateauing iPhone sales, it has been highlighting revenue growth excluding the iPhone in recent years. This figure has been accelerating quite well, hitting 25% last quarter. 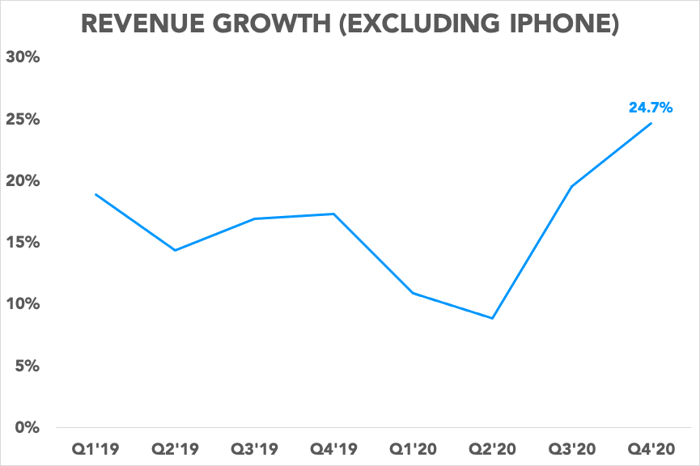 The iPhone installed base has hit a new all-time high, although management did not disclose a specific figure. Independent analyst Neil Cybart recently estimated that iPhone users have reached 1 billion. Fiscal 2020 was a record year with revenue of $274.5 billion.

Apple repurchased $18 billion worth of stock during the quarter, bringing full-year buybacks to an astounding $72.5 billion. Total cash was $191.8 billion, and factoring in $112.4 billion in debt brings net cash to $79.4 billion. Slowly but surely, the company continues to make progress on the “net cash neutral” goal that Maestri set back in early 2018. 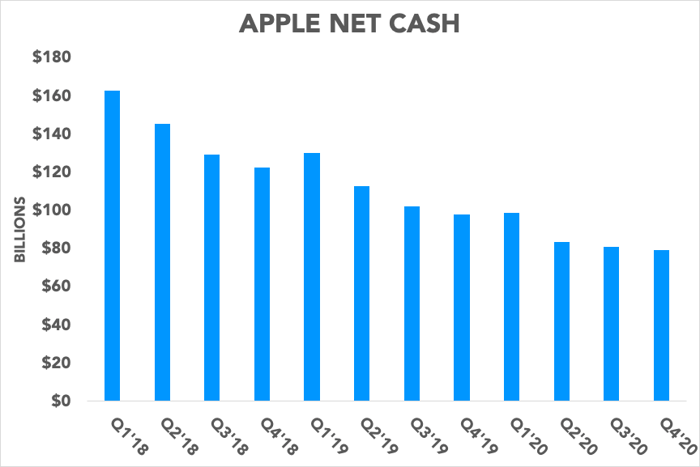 The board has authorized a quarterly dividend of $0.205 per share, which will be payable to shareholders of record as of Nov. 9.

Maestri stopped providing specific financial guidance earlier this year due to all of the ongoing macroeconomic uncertainty related to the pandemic but did offer some commentary. Of course, iPhone revenue will soar next quarter, even though the new iPhone 12 lineup is launching meaningfully later than in prior years due to coronavirus-related delays that have impacted the supply chain.

All other products and the services business are expected to grow by double-digit percentages. Gross margin should be roughly flat, as the seasonal operating leverage that Apple typically enjoys over the holidays is offset by the heightened costs that are normally associated with new product launches. Fortunately, foreign exchange headwinds have mitigated, so Maestri doesn’t expect currency fluctuations to be a major issue.

CEO Tim Cook said Apple is working as hard as it can to overcome supply constraints. That will be critical to the company’s execution in the weeks ahead, which will include the launch of iPhone 12 Mini, iPhone 12 Pro Max, and potentially even more products that have been rumored, like AirTags or an Arm-based Mac.