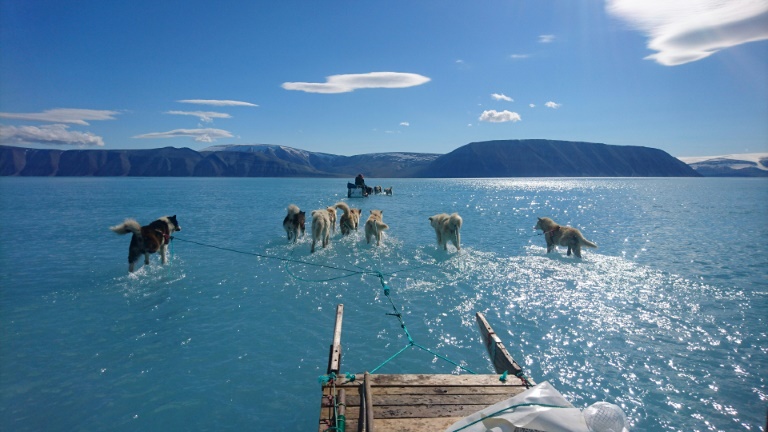 Since the 1990s, warming has been twice as fast in the Arctic, compared to the rest of the world

COPENHAGEN – Sea ice in the Arctic was at record lows for October, as unusually warm waters slowed the recovery of the ice, Danish researchers said Wednesday.

Diminishing sea ice comes as a reminder about how the Arctic is hit particularly hard by global warming.

Since the 1990s, warming has been twice as fast in the Arctic, compared to the rest of the world, as a phenomena dubbed “Arctic amplification,” causes air, ice and water to interact in a reinforcing manner.

“The October Arctic sea ice extent is going to be the lowest on record and the sea ice growth rate is slower than normal,” Rasmus Tonboe, a scientist at the Danish Meteorological Institute (DMI), told AFP, noting that the record was unequalled for at least 40 years.

Every year, some of the ice formed in the Arctic waters melts in the summer.

Satellite data has been collected to monitor the ice precisely since 1979, and the trend towards a reduction is clear.

For the month of October, measurements show an 8.2 percent downward trend in ice over the last 10 years.

Already in September, researchers noted the second lowest extent of sea ice recorded in the Arctic, though not quite hitting the low levels recorded in 2012.

But warmer-than-normal sea water slowed the formation of new ice in October.

Water temperatures in the eastern part of the Arctic, north of Siberia, was two to four degrees warmer than normal, and in Baffin Bay, it was one to two degrees warmer, DMI said in a statement.

The institute said this was following a trend observed in recent years, which was described as a “vicious spiral.”

“It’s a trend we’ve been seeing the past years, with a longer open water season making the sun warm the sea for a longer time, resulting in shorter winters so the ice doesn’t grow as thick as it used to,” Tonboe said.

Since the melting ice is already in the ocean it does not directly contribute to the rise in sea levels.

But as the ice disappears sunlight “gets absorbed in the ocean, helping to further warm the Earth,” Claire Parkinson, climate scientist at NASA, told AFP in September.

Over the last 40 years the Arctic has also become more of a strategic interest to world powers.

Less ice in certain areas have opened up new maritime routes, which are destined to play a larger role in international trade, meaning a larger financial stake for Arctic state actors.

The region is also estimated to house 13 percent of the world’s oil reserves and 30 percent of undiscovered natural gas deposits.

That’s on top of the 1.5C of warming our current emissions levels have rendered all but inevitable, and the safer cap on global warming aimed for in the Paris climate accord.

How This Saint John Art Gallery Is Making Its Exhibits 'Pandemic-Proof' – country94.ca