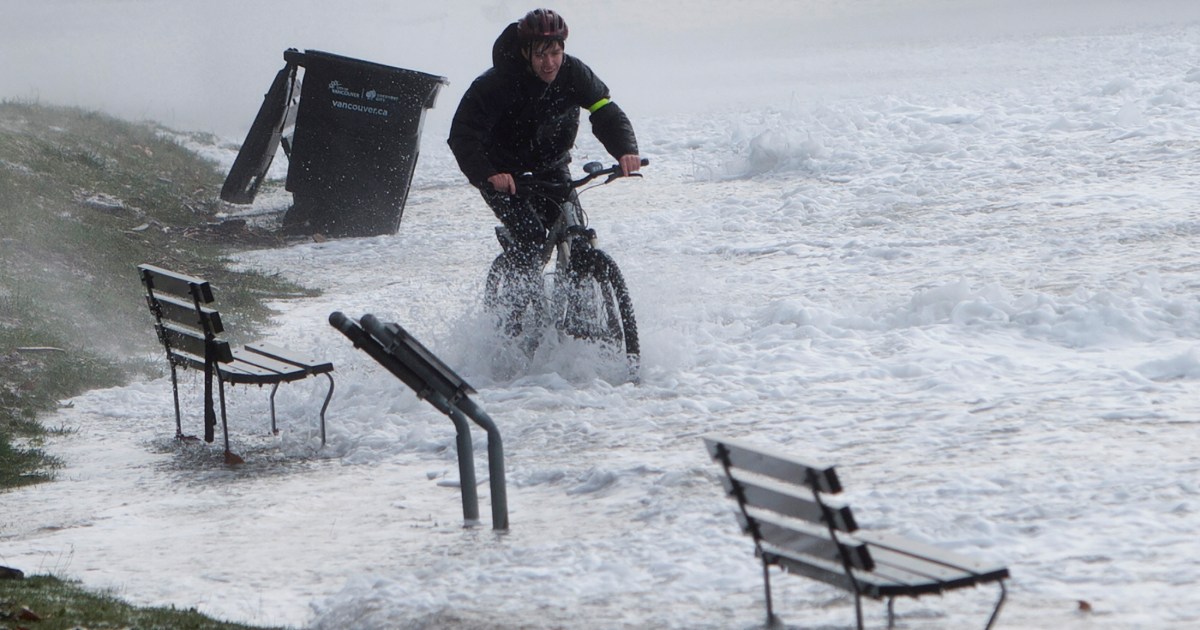 Heavy rain has prompted evacuations in British Columbia and caused power outages in the US state of Washington.

At least one person has been killed as torrential rains triggered landslides and floods in western Canada, forcing the closure of the country’s busiest port in Vancouver.

Canada’s federal police force, the Royal Canadian Mounted Police (RCMP), confirmed on Tuesday that at least one woman died after mudslides blocked a major highway in the province of British Columbia. The flooding has also closed several highways in and around the greater Vancouver area, a major coastal city that is home to nearly 2.5 million people.

Port authorities announced on Tuesday that they had suspended rail routes operated by Canada’s two largest rail companies – Canadian Pacific Rail and Canadian National Railway – because of the floods.

“All rail service coming to and from the Port of Vancouver is halted because of flooding in the British Columbia interior,” said port spokesperson Matti Polychronis.

The storms temporarily stopped much of the movement of wheat and canola from Canada, one of the world’s biggest grain producers. It is not clear how long it will be before rail access to the port is restored.

Nearly 300 people trapped by mudslides were rescued by helicopters in British Columbia late on Monday.

“Trapped between two slides are approximately 275 additional people, including 50 children, who were advised to shelter in place overnight as debris was unstable and unsafe to cross,” the City of Vancouver and Canada Task Force 1 said in a joint statement.

Earlier on Monday, authorities in Merritt, some 200km (124 miles) northeast of Vancouver, ordered all 7,100 citizens to leave after rising waters cut off bridges and forced the wastewater treatment plant to close.

The towns of Chilliwack and Abbotsford, east of Vancouver, also ordered partial evacuations on Tuesday.

Some areas received 200mm (8 inches) of rain on Sunday – the amount they usually see in a month – and the deluge continued on Monday, with roads covered by mud or up to 250mm (10 inches) of water.

In the United States, thousands experienced power outages because of the heavy rain in Washington state, just south of British Columbia. Nearly 50,000 customers remained with no power on Tuesday; as many as 158,000 customers had lost power at the height of the storm on Monday in the state.

One person in the small town of Everson, north of Seattle, has gone missing after being swept away by floodwaters.

British Columbia and the US northwest have been frequently experiencing extreme weather events that experts partly blame on global warming. The region saw large wildfires and record temperatures over the summer in a heatwave that killed hundreds of people.

First Canadian convicted of leaving to join terror group sent back to prison over threats – Globalnews.ca

‘Harry Potter’ stars, but not J.K. Rowling, to reunite for TV special

The United States will revoke its designation of the Colombian group the Revolutionary Armed Forces of Colombia as a foreign terrorist organization on Tuesday while designating two breakaway groups as such, a senior State Department official said on Friday.

A review of the terrorist listing – required every five years under U.S. law – found that the leftist organization known by the Spanish acronym FARC should no longer be listed, The official said.

But the two dissident groups that have formed out of FARC, La Segunda Marquetalia and FARC-EP, or People’s Army, would be designated as foreign terrorist organizations, the official said.

“It’s a realignment to address these current threats,” the official said. “The FARC that existed five years ago no longer exists.”

Founded in 1964, FARC was responsible for summary executions and kidnappings of thousands of people, including Americans.

On Tuesday, Reuters reported that the United States was preparing to remove FARC from the list five years after the group signed a peace agreement with Bogota.

The State Department notified the U.S. Congress on Tuesday of its planned delisting of FARC. The Colombian government was formally notified on Wednesday.

The government of Colombia did not immediately respond to a request for comment.

The decision will allow U.S. government agencies like the U.S. Agency for International Development to work on peace implementation in parts of Colombia where demobilized FARC soldiers are located, the official said.

“This is a priority for the Colombian government in the implementation of the peace agreement,” the official said.

(Reporting by Daphne Psaledakis and Simon Lewis in Washington; Additional reporting by Oliver Griffin in Bogota; Editing by Mark Porter and Leslie Adler)

Tunisian police on Friday shot and wounded an extremist who sought to attack them with a knife and cleaver in the capital, authorities said.

The 31-year-old man, whose identity was not disclosed, shouted, “God is great. You are infidels,” as he ran toward police officers near the interior ministry, the ministry said in a statement.

Witnesses and local media said police shot the man in the leg and arrested him. The man, who was previously labelled an extremist by the government, was taken to hospital and is being investigated by an anti-terrorism unit, officials said.

Tunisian security forces have thwarted most militant plots in recent years and they have become more efficient at responding to those attacks that do occur, Western diplomats say.

The last major attacks in Tunisia took place in 2015 when militants killed scores of people in two separate assaults at a museum in Tunis and a beach resort in Sousse.

At least 19 killed in bus crash in central Mexico

At least 19 people were killed and 20 more injured on Friday when a passenger bus traveling on a highway in central Mexico crashed into a house, authorities said.

The brakes on the bus, which was heading to a local religious shrine in the state of Mexico, failed, according to local media reports. State authorities did not disclose the possible causes of the accident.

Assistant state interior secretary Ricardo de la Cruz Musalem said that the injured had been transferred to hospitals, including some by air.

The state Red Cross said 10 ambulances had rushed to the area.

Ocean Economy: The Next Wave of Sustainable Innovation – Visual Capitalist