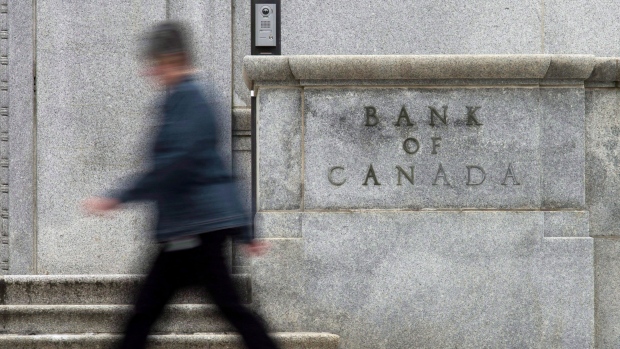 OTTAWA —
The Bank of Canada kept its key interest rate on hold Wednesday as it said the country’s economy won’t recoup the losses from COVID-19 until 2022, with the road to recovery dependent on the path of the pandemic.

In July, the Bank of Canada said it believed the country had been spared from a worst-case scenario.

The bank’s updated outlook in its monetary policy report said the rebound over the summer was stronger than expected as the country reversed about two-thirds of the decline seen in the first half of the year.

Officials estimate the economy will shrink by 5.7 per cent this year, but grow by 4.2 per cent next year, and 3.7 per cent in 2022, meaning gross domestic product won’t rebound to pre-pandemic levels for another two years.

In his opening remarks at a late-morning press conference, governor Tiff Macklem said it will take quite some time for the economy to fully recover from the COVID-19 pandemic, and the path will be “uneven across sectors and choppy over time.”

“We know the pandemic is reducing investment and is likely to cause long-lasting damage to some people’s job prospects. These forces will reduce Canada’s economic potential,” Macklem said.

The bank held its overnight rate target at 0.25 per cent on Wednesday, which is where it will stay until the economy has recovered and inflation is back on target.

The bank also announced Wednesday that it intended to buy more longer-term bonds because those have a “more direct influence on the borrowing rates that are most important for households and businesses.”

James Laird, co-founder of Ratehub.ca said the outlook suggests low interest rates until at least 2023, which is the earliest the bank anticipates the economy would be able to handle higher rates.

The projections for growth and inflation mark a return to the bank’s usual practice of giving a longer view for the economy in its quarterly monetary policy report.

The report said the six months of experience with containment measures and support programs, as well as more information on medical developments like vaccines, has given the bank a better foundation to make a base-case forecast.

Underpinning the bank’s outlook are two major assumptions: That widespread lockdowns won’t be utilized again and that a vaccine or effective treatment will be widely available by mid-2022.

The country has recouped about two-thirds of the three million jobs lost in March and April. Emergency federal aid has replaced lost wages for millions of workers, and provided loans and wage subsidies to struggling businesses.

The recuperation from the drop earlier this year has been uneven, the report notes. The hardest hit sectors, such as restaurants, travel and accommodations, continue to lag.

Workers in those sectors, as well and youth and low-wage workers, continue to face high levels of unemployment, the report says.

All may be hit hard again by any new rounds of restrictions, the report notes. Some areas of the country have already imposed such public health restrictions in the face of rising COVID-19 case counts.

“The breadth and intensity of re-imposed containment measures, including impacts on schools and the availability of child care, could lead to setbacks,” the report says.

“Long breaks in employment have the potential for longer-term impacts on the income prospects of vulnerable groups.”

The report said government aid has played a key role in providing a financial lifeline to individuals and businesses.

Changes to employment insurance and new benefit programs will increase households’ disposable income, officials write, adding that the bank expects government aid to “provide important support to the economy throughout the recovery.

This report by The Canadian Press was first published Oct. 28, 2020

A grim milestone and update on pandemic-plagued economy. : In The News for Oct. 28 – Kamloops This Week