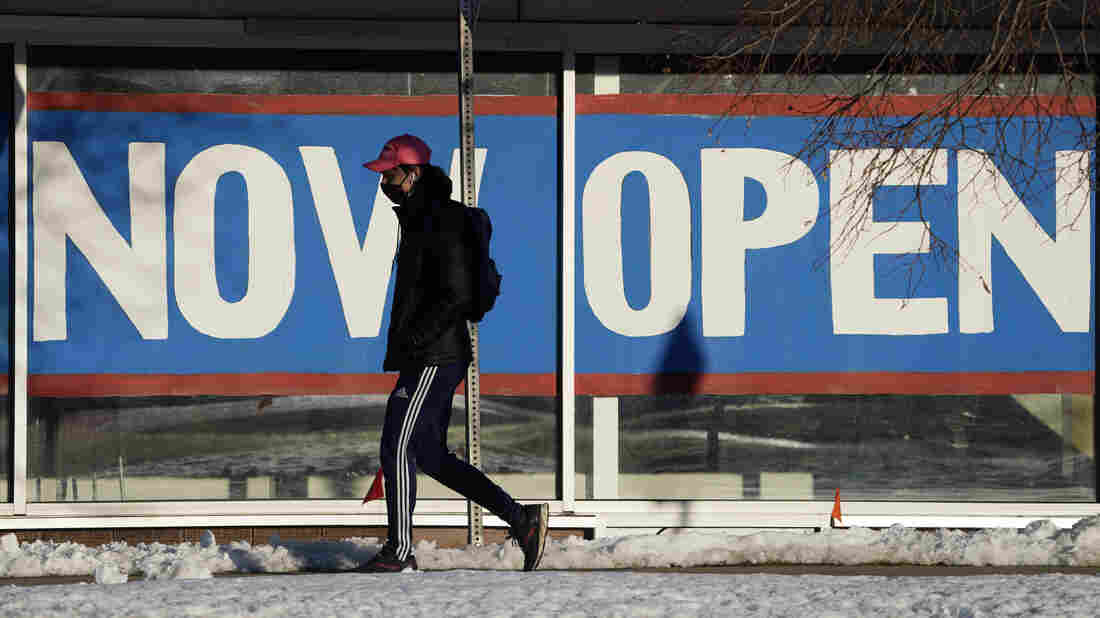 A pedestrian on Feb. 25 walks past the window of a restaurant with a sign promoting its re-opening in Boulder, Colo. Congress on Wednesday passed a $1.9 trillion stimulus plan, which is expected to provide a strong boost to economic growth.

The U.S. economy is about to get a shot of its own.

The $1.9 trillion relief package passed by Congress on Wednesday is expected to give a substantial boost to the world’s largest economy once it’s signed by President Biden, putting more money in people’s pockets just as an improving pandemic outlook opens new avenues for them to spend it.

According to the Centers for Disease Control and Prevention, 61 million people in the United States have gotten at least one shot, with 32 million already fully vaccinated.

The rollout of vaccines offers the promise of more normal travel and entertainment options later in the year, further boosting the outlook of an economy already showing signs of improvement.

“The key engine of growth is going to be that powerful cocktail of both a healthier economy along with fiscal stimulus,” said Gregory Daco, Chief U.S. Economist at Oxford Economics.

The Organization for Economic Cooperation and Development projects the U.S. economy will grow by 6.5% this year. That’s more than twice the growth rate it was projecting in December — thanks in large part to more robust federal aid.

Daco himself believes the U.S. economy will grow by 7% this year, while also adding 7 million jobs – a level of growth not seen since about the 1980s.

“It’s been about four decades since we’ve seen such strong growth in real GDP,” he said. “But you have to remember that we’re coming out of a very deep hole when it comes to the damage that’s been done by the COVID crisis.” 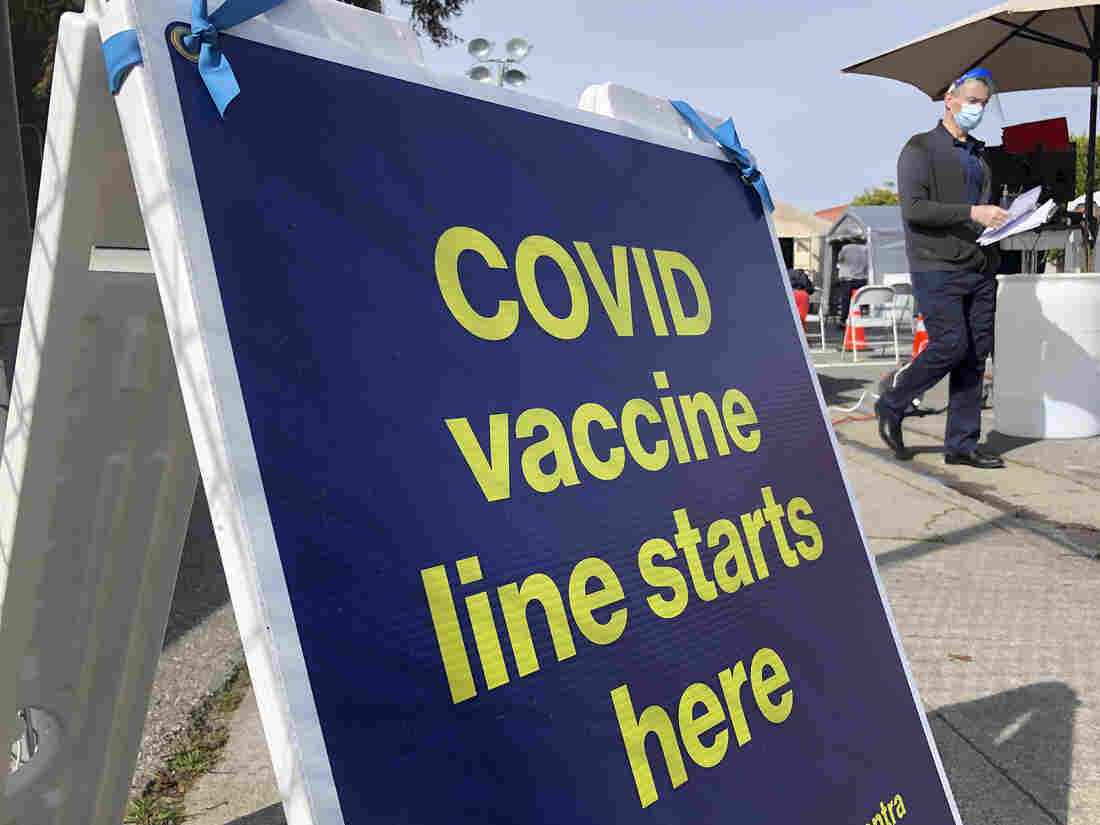 A sign is shown at a COVID-19 vaccine site in San Francisco on Feb. 8. The rollout of vaccines is raising the prospect of increased travel and spending by Americans.

Also helping turbocharge growth is how President Biden’s plan is structured, according to experts.

The American Rescue Plan — which Democrats pushed through Congress with no Republican support — includes $1,400 payments for most Americans, extended unemployment benefits and increased subsidies for children.

The benefits are heavily weighted towards low- and moderate-income families, in marked contrast to the 2017 tax cut, which Republicans championed on a similar, party-line basis.

Rather than waiting for benefits to trickle down, the COVID relief package showers money on lower-income households, boosting income for the poorest 20% of families by an average of 20%, according to the Tax Policy Center’s analysis, while top earners would see their income rise less than 1%.

Because low-income families are more likely to spend the extra money, it’s expected to provide a significant lift to the broader economy.

“There was a big question about the [2017] Tax Cut and Jobs Act, whether or not it would over time have much of a stimulative effect,” said Howard Gleckman, a senior fellow at the non-partisan Tax Policy Center. “This one, there’s no question. Everyone agrees it will stimulate the economy. The question is will it stimulate the economy too much?” 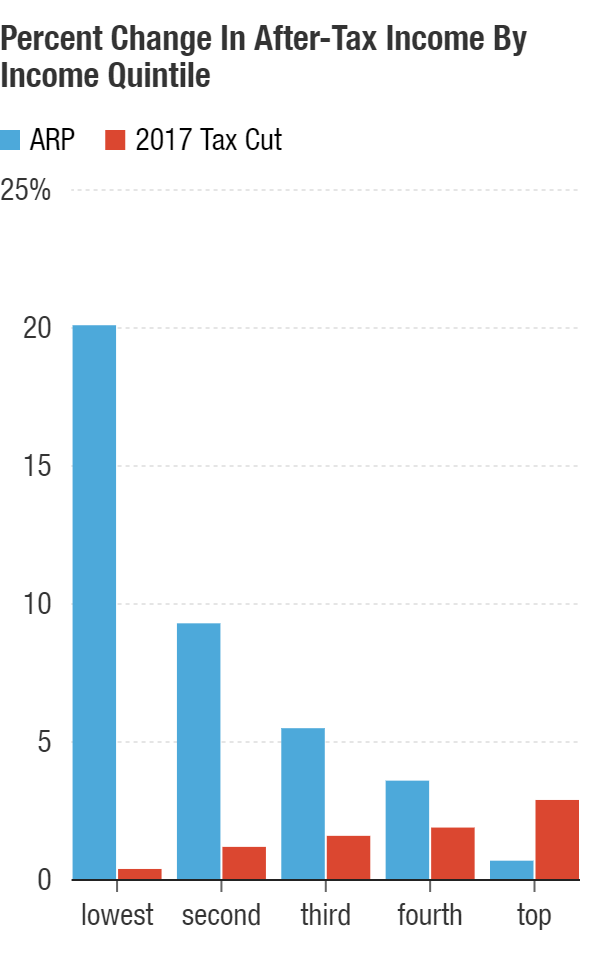 Lower-income families get the biggest boost from the tax benefits in the American Rescue Plan, in contrast to the 2017 tax cut which primarily benefited the wealthy.

The center’s analysis looked only at the tax provisions of the latest bill, not measures like unemployment benefits or aid to cities and states.

But the question of whether it will prove too stimulative and trigger inflation has raised concerns among other analysts.

Former Treasury Secretary Larry Summers, who served in different positions in the Clinton and Obama administrations, has been one of the most prominent Democratic critics of the plan.

Summers is concerned that with consumer spending already on the rise, a surge in new federal spending could overwhelm businesses, triggering a rise in prices.

“We need to make sure we’re concerned with not overheating the economy,” Summers told NPR’s Weekend Edition last month.

Summers also warned that deficit-financed spending now on a short-term relief package could make it harder for the Biden administration to find money later for long-term investments in things like infrastructure.

The Labor Department said Wednesday that consumer prices had risen just 1.7% in the last year — below the Federal Reserve’s annual target of 2%.

While prices are expected to increase faster in the months to come, Fed officials have said repeatedly they expect that acceleration to be temporary.