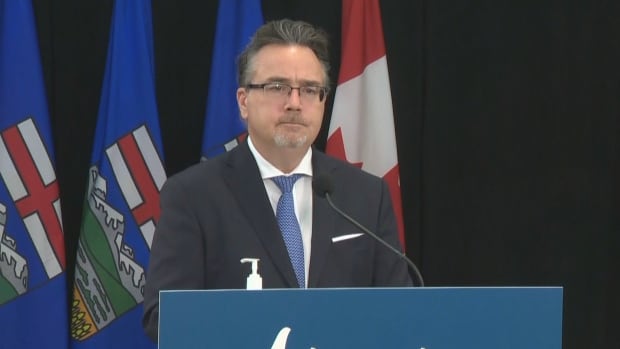 A new bill introduced in the Alberta legislature Wednesday would open up participation in the province’s power grid, allowing companies to self-supply unlimited amounts of power and sell excess amounts to the grid for consumer use.

If passed, Bill 86, the Electricity Statutes Amendment Act, would change existing laws and regulations that govern energy storage, sale, and transmission in Alberta.

Currently, self-supply and export is not allowed in the province except in four specific scenarios including at designated industrial sites and in the case of municipalities generating their own power.

“This would allow all companies that want to produce electricity for their own use, as well as sell it back to the marketplace, to participate,” Dale Nally, associate minister of natural gas and electricity, said at a news conference Wednesday.

“Industry is asking for this and we want to be able to provide this investor certainty in this space in the electricity marketplace,” Nally said, calling the current system “very restricted.”

The companies would also be able to draw from the province’s power grid when needed. The government said the bill would allow for all forms of electricity generation.

Bill 86 would encourage other forms of energy storage — the ability to keep excess electricity for later use — like battery storage systems which could help deal with the “intermittency” of renewable energy, decrease carbon emissions, and improve the reliability of the power grid, Nally said

Eventually, the proposed changes would lower prices for consumers, he said.

“Businesses, using energy storage, could purchase cheap electricity at night, sell it back into the marketplace during the day,” Nally said. “And it is this type of increased competition and increased choice that will bring down the cost of electricity in this province.”

Under the bill, the new self-suppliers and sellers would have to meet public health and safety requirements on generators, as well as rules around participation in Alberta’s power pool.

These companies would have to pay an “appropriate tariff,” Nally said, that would ensure they couldn’t bypass transmission costs and drive up prices for consumers. The Alberta Electric System Operator would set that tariff.

More electric vehicles are becoming capable of powering buildings and the power grid through “bidirectional charging,” in which they discharge power from their batteries when plugged in.

In a report released in February, the Alberta Utilities Commission (AUC) said emerging technologies are affecting the supply and demand of electricity, “creating new avenues for customers to potentially bypass utility service and the associated tariff changes.

“This not only creates competitive pressures where none existed before, but also raises questions about the future viability of electric utilities and the role of regulation during a period of significant industry transformation,” the report said.

The AUC warned that some consumers, large and small, were considering battery storage, “bringing the prospect of independence from the grid closer to reality.”

In an emailed statement, NDP energy critic Kathleen Ganley said the legislation does nothing to help utility bills in the short term.

“We support adding more energy storage to the grid and have been consulting through our Alberta’s Future project on ways we can achieve a net-zero grid by 2035 while creating 60,000 jobs,” she said. ” We will continue to consult with Albertans and will be closely watching the implementation of this bill to ensure Albertans are not faced with even higher utility bills under the UCP government.”

Google signs 5-year deal to pay for news from AFP