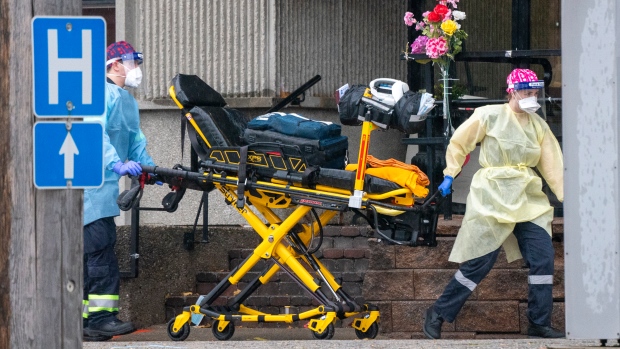 Canada surpassed 15,000 COVID-19 deaths on Monday, and at least one infectious disease expert says the somber milestone should be a wake-up call to anyone who thinks the dangers of the disease are overhyped.

Quebec reported 37 deaths Monday, pushing Canada past 15,000. Health officials in that province said seven deaths took place in the last 24 hours, 27 occurred between Dec. 21 and Dec. 26, and three were from unspecified dates.

Alberta followed later in the day, announcing that 112 people died over the course of the holidays between Dec. 23 and Dec. 27, with a high of 30 deaths on Dec. 23 and a low of 17 on Christmas.

More than 1,000 people have now died in Alberta since the pandemic began.

“This tragic milestone is more than a number or statistic,” Alberta Premier Jason Kenney said in a statement.

“It represents more than 1,000 mothers, wives, fathers, husbands — empty spaces around the table that can never be filled. Each one means that there is a family that is grieving, a friend who has lost someone they loved, a child who lost their parent, a partner who lost their true love.”

Reaching more than 15,000 deaths in the nine months since the pandemic began highlights just how serious COVID-19 is, said Dr. Gerald Evans, chair of the infectious diseases division at Queen’s University in Kingston, Ont.

“We are seeing exactly what’s being seen around the world, which is that there are substantially large numbers of deaths from this virus. It’s not the flu,” Evans said in an interview on Monday.

“I would hope that it would reinforce to these people who are saying that it’s a big hype,” he said. “It’s not a hype. People are dying from this. This is a deadly disease.”

Quebec also reported 2,265 new cases of COVID-19 — the second day in a row the province recorded more than 2,200 new infections.

The province has 1,124 COVID-19 hospitalizations, including 150 people in intensive care, and officials warned that many hospitals were full.

Manitoba reported 107 new cases of COVID-19 on Monday and nine additional deaths linked to the virus, increasing the provincial total to 654 deaths since the pandemic began.

Nunavut reported one new infection in Whale Cove, a community that went into lockdown on Christmas Eve. The territory now has nine active cases of COVID-19.

In Atlantic Canada, Newfoundland and Labrador reported two new cases of COVID-19 on Monday, while New Brunswick said one new infection was detected in the Fredericton area.

After a break in reporting, authorities in Nova Scotia also said they had identified 13 new cases of COVID-19 since Dec. 25. The new infections are all linked to close contact with a previous case or to travel outside of Atlantic Canada.

Officials in N.L. said one of the new infections related to international travel, while the other is a man who returned from working in Alberta.

The province had 19 active cases of COVID-19 with one person in hospital.

“We are seeing more travel-related cases and transmission to household members when self-isolation measures are not strictly adhered to,” Russell said, calling on people who need to self-isolate to do so for the full 14 days as per public health directives.

Ontario was not reporting new COVID-19 case numbers on Monday after registering 2,005 new infections on Sunday, as well as 18 more deaths.

Meanwhile on Monday, Alberta became the third province in Canada to report a case of a more contagious strain of the virus.

Provincial medical health officer, Dr. Deena Hinshaw, said that person started showing symptoms after returning from the United Kingdom, where the variant was first seen, and did everything correctly in terms of isolating upon their return.

Cases of the new variant have also been detected in the Toronto area, Ottawa and on Vancouver Island in B.C.

The Public Health Agency of Canada said while early data suggests the new variant may be more transmissible, there is no evidence the variant causes more severe symptoms or impacts vaccine effectiveness.

— With files from Denise Paglinawan in Toronto, Sarah Smellie in St. John’s and Rob Drinkwater in Edmonton.

This report by The Canadian Press was first published Dec. 28, 2020.

The Big Five Banks is a term used in Canada to describe the five largest banks: Royal Bank, The Bank of Montreal, Canadian Imperial Bank of Commerce, The Bank of Nova Scotia, and TD Canada Trust.

Occasionally, the term “Big Six Banks” is used, with the sixth bank referring to the National Bank of Canada. As of March 2008, the Big Six Banks and Laurentian Bank of Canada are the largest banks in Canada. The Five Big Banks hold over $100 billion in assets, and they are all based in Toronto. World Atlas provides the following data on each of the Big Five Banks.

The second-largest bank in Canada, the Toronto-Dominion Bank has the most assets, which are valued at C$1.4 trillion as of July 2019. This bank has over 22 million clients worldwide, 85,000 full-time employees and over 1,100 branches. The bank was the result of a merger of the Bank of Toronto and the Dominion Bank in 1955.

The Bank of Nova Scotia, or Scotiabank, is the next largest bank in Canada with assets valued at C$998 billion as of late 2019, the revenue of C$28.8 billion in 2018 and capitalization of C$87.55 billion. The bank has over 23 million customers worldwide, 89,000 full-time employees and over 1,000 branches in Canada. This bank offers to trade on both the New York and Toronto Stock Exchanges.

Also founded in Halifax, Nova Scotia—this one in 1832—the bank moved its headquarters to Toronto in 1900 to improve the transAtlantic trade industry.

The Bank of Montreal is the fourth largest Canadian bank with C$852.2 billion worth of assets in late 2019, the revenue of C$22.8 billion and capitalization of C$64.81 billion as of early 2020. The bank has over 7 million clients in Canada and 939 branches. The bank has over 47,000 employees. It was founded in 1817 and is the oldest bank in Canada. Throughout crises such as World War I, the Great Depression, World War II, and the 2008 Global Financial Crisis, the Bank has consistently met dividend payments.

General Motors Chief Executive Mary Barra faced questions from U.S. lawmakers on Wednesday on a workers’ vote at a company plant in Mexico and the company’s support for emissions reductions.

Barra met with House of Representatives Speaker Nancy Pelosi and other senior Democrats on Capitol Hill, and touted the company’s decision announced earlier in the day to boost spending on electric and autonomous vehicles to $35 billion through 2025.

“We’re committed to an all-EV future,” Barra said in brief comments to Reuters after the meeting. “We had a lot of conversations about a lot of things that we can do to enable EV adoption.”

Until November, GM backed the Trump administration’s effort to block California from setting tougher emissions standards than the federal government.

Pelosi had expressed disappointment with GM’s support for Republican President Donald Trump’s position on the emissions rules, a source briefed on the matter said, and she urged GM to work with California and the Biden administration to reach the strongest possible vehicle emissions standards.

GM said last week it backs emissions reductions outlined in a 2019 deal struck between California and other major automakers, but wants the federal government to endorse changes to speed the adoption of electric vehicles.

Barra also faced questions about a delayed worker vote at a GM plant in Silao, Mexico.

Mexico’s Labor Ministry scrapped an initial union-led vote in April, citing “serious irregularities,” and later ordered the GM union to hold a new ballot within 30 days of its May 11 statement. No vote has been scheduled

The U.S. Trade Representative’s Office in May asked Mexico to review potential labor abuses at the Silao plant under the United States-Mexico-Canada Agreement (USMCA).

“We want to see some real demonstration of embracing the labor standards in Mexico — more than compliance,” Kildee told Reuters after the meeting. “The situation in Silao — I raised that with Mary — that’s a problem.”

The Democrats urged GM to commit to providing workers with physical copies of the contract, publicly posting contracts and to meet other requirements.

Kildee offered additional steps GM could take to support workers and meet USMCA requirements, and the three lawmakers followed up with a written list of suggested actions, congressional aides said.

The suggestions “would be tangible demonstrations of GM’s commitment to lead on compliance with the new labor standards,” Kildee told Reuters.

Earlier Wednesday, some House lawmakers on a trade panel, including Kildee, had a virtual meeting with Mexico’s ambassador to the United States in which the GM labor issued was raised.

Presenting Your Professional Experience: Numbers Are Your Friends

Numbers rule the business world—revenue, headcount, process time, value increase, number of clients, inventory count, profit margin, credit rating, customer satisfaction score. Numbers indicate and measure success or failure, whether a business activity is positive or negative to the bottom line. You’d be hard-pressed to find a business decision made without some factoring in of “the numbers,” be it stats, cost, the potential return on investment.

Hiring is a business decision.

To make a strong case for yourself (Envision your selling features.) throughout your resume use numbers, the language of business, to quantify your results and establish yourself as someone who can bring value to an employer. Using numbers shows you understand how companies operate and that they exist to make a profit. Most importantly, using results-achieved numbers displays your value.

Candidate 2: Spearheaded the Hazzard County water decontamination project, finishing $125,000 under budget due to a 25% decrease in staff allocation time.

Which job seeker gives a clearer picture of their responsibilities?

Candidate 2: Reviewed and evaluated 50 – 75 articles per week, deciding whether to reject the article, forward it to the editorial team, or send it back to the author with revision suggestions.

Information quantified means something. Information not quantified is just an opinion. Most resumes are just a list of opinions, thus quantifying your professional experience will set you apart from your competition.

TIP: Always use bullets, not paragraphs, to describe your professional experiences.

For each position you list on your resume, ask yourself:

As I mentioned a few columns back, your resume must clearly and succinctly answer one question: How did you add or bring value to your employers? When it comes to answering this question, numbers are your friends.

Something to keep in mind: The king of numbers, the only metric in business that matters, the one that keeps a business alive and profitable, is revenue. As much as possible, throughout your resume and cover letter, demonstrate the results you’ve achieved that were added value to your employer’s financial success.

Don’t write on your resume what’s become a cliche, “result-oriented.” Don’t write it on your LinkedIn profile. Don’t say it during an interview. Show your results! “In 2017, I increased sales by 29% by creating upsell opportunities for my 8-member sales team to offer.”

Next week I’ll cover presenting your education, skills, and certifications. These need to demonstrate your career path, not that you simply attended classes.