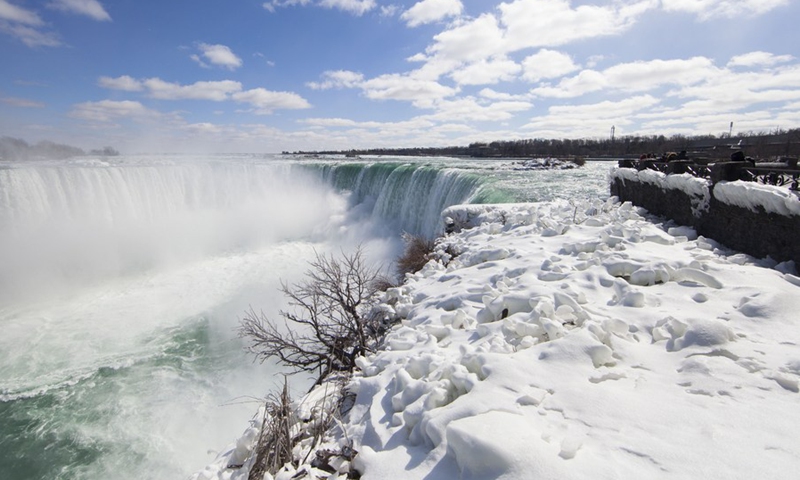 Few visitors are seen from the Canadian side in Niagara Falls, Ontario, Canada, on March 2, 2021.(Photo: Xinhua)

Canada’s tourism economy suffered unprecedented losses in 2020 due to the COVID-19 pandemic and is by far the most threatened sector in the country’s economy, according to Destination Canada on Monday.

From April to November 2020, revenues from air transportation for passengers fell 91 percent and accommodation revenues plummeted by 71 percent. Small and medium-sized businesses make up 99 percent of enterprises in the tourism sector.

During last summer, the highest weekly average occupancy rate for hotels in Canada only reached 42.9 percent. Passengers on major Canadian airlines for the month of June reached 440,000, which was 6.7 million fewer passengers than the same month a year prior.

Alongside rapid declines in tourism, the COVID-19 pandemic brought business events, entertainment and festivals to a halt; the combined impact resulted in massive losses to hotel revenues, with data showing that major cities have been hardest hit. Montreal, Toronto and Vancouver downtown hotels recorded the lowest occupancies of any region in Canada, with revenues falling an estimated 79 percent in the last year, a loss of 2.3 billion Canadian dollars (about 1.8 billion U.S. dollars) across the three cities.

Despite initial signs of recovery, the country’s tourism businesses continued facing significant financial stress resulting in business closures, some permanently, throughout the year. This resulted in a decline of 9 percent in active businesses from January to November 2020 — the greatest decline of all business sectors.

Destination Canada called the current situation facing the tourism sector the worst ever, direr than the impact experienced after 9/11, SARS and the 2008 economic crisis combined.

The tourism economy helps sustain 150,000 jobs in the country. One in every 10 Canadian jobs is tied to tourism.

The jobless rate in the tourism sector remained the highest out of any sector, 6.6 percent above the national rate at the end of 2020. The loss of core staff will hinder businesses’ ability to scale up efficiently, thus further impacting recovery.

Destination Canada said it faces an estimated 19 billion Canadian dollars shortfall that could be made up if Canadians shifted two-thirds of their planned spending on international leisure travel to travel at home.

What Is the Bank of Canada (BOC)

The Bank of Canada (BOC) is Canada’s central bank, and was established in 1934 under the Bank of Canada Act. The Act stated that the Bank of Canada was created “to promote the economic and financial welfare of Canada.” The BOC and its Governor are responsible for setting monetary policies, printing money, and determining the Canadian banks’ interest rates.

The History of the Bank of Canada

The BOC has four main areas of responsibility: monetary policy, which dictates the supply of money circulating in the Canadian economy; currency, the design and issuing of Canada’s bank notes, and managing funds. The BOC manages the Canadian government’s public debt and reserves of foreign exchange.

Canada’s former Prime Minister, William Lyon Mackenzie King, officially signed the Bank of Canada Act into law. In 1938, the BOC was legally designated as a federal crown corporation. Prior to the signing the law, Canada’s largest bank, the Bank of Montreal, acted as the government’s banker.

The BOC Governor is responsible for many of the bank’s functions. The first Governor, Graham F. Towers, served for 20 years. The board-of-directors-elected BOC Governor serves seven-year terms. Governor Tiff Macklem has served since 2020 and is the bank’s 10th governor. The members of the board of directors are appointed by Canada’s Minister of Finance and serve for three-year terms.

The BOC and Interest Rates

Setting the interest rate is one of the BOC’s most important roles. Canada’s monetary policy framework is designed to keep inflation low and stable. The interest rate is decided eight times a year. In 2007, the interest rate was above 4 percent before being lowered, over time, to 1 percent in 2010. The rate was cut twice in 2015 to 0.5 percent. Since 2015, this rate has risen three times to 1.25 percent as of April 2018 and 1.75 percent as of March 2020. This rate is the interest charged when banks lend money to each other. The BOC generally imposes rate cuts to boost the economy.

Other Functions of the BOC

Creating the national currency for Canada is another important task of the BOC. The governor’s responsibility is to provide money that is difficult to counterfeit and has an authentication process in place. Canada contracts the printing of money to an outside printing company. The governor’s signature is printed on all Canadian paper money.

The BOC’s headquarters are 234 Wellington Street in the city of Ottawa. This is where the bank has operated since 1980 after several relocations. Regional Bank of Canada offices are in Vancouver, Calgary, Toronto, Montreal, and Halifax.

The Bank of Canada is starting to see signs that the country’s red hot housing market is cooling down, although a return to a normality will take time, Governor Tiff Macklem said on Wednesday.

The sector surged in late 2020 and early 2021, with home prices escalating sharply amid investor activity and fear of missing out. The national average selling price fell 1.1% in May from April but was still up 38.4% from May 2020.

“But we do think it is going to take some time and it is something that we are watching closely,” he told the Canadian Senate’s banking committee.

Macklem reiterated that the central bank saw evidence people were buying houses with a view to selling them for a profit and said recent price jumps were not sustainable.

“Interest rates are unusually low, which means eventually there’s more scope for them to go up,” he said.

Last year, the central bank slashed its key interest rate to a record-low 0.25% and Macklem reiterated it would stay there at least until economic slack had been fully absorbed, which should be some time in the second half of 2022.

“The economic recovery is making good progress … (but) a complete recovery will still take some time. The third wave of the virus has been a setback,” he said.

The bank has seen some choppiness in growth in the second quarter of 2021 following a sharp economic recovery from the COVID-19 pandemic at the start of the year, he added.

Toronto Stock Exchange index treaded water on Wednesday, tracking the Wall Street, as investors awaited comments from the U.S. Federal Reserve on when it would ease its monetary stimulus.

What Is the Bank of Canada (BOC)