Canadian public health agencies are ramping up preparations to deal with a new virus that has infected hundreds of people in China and killed at least 17.

Authorities in several countries have confirmed cases of the illness, including one in the United States, and public health officials in Canada say they would not be surprised if the virus does make its way here — or already has.

The head of Quebec’s public health authority said Wednesday five people in that province were under surveillance for possible exposure. The five, from the Montreal and Quebec City areas, had travelled to China “and have a history that could be compatible with the fact they could have been exposed,” Horacio Arruda said.

Ontario’s chief medical officer of health, Dr. David Williams, said the province recently evaluated three patients that “met some case definition:” flu-like symptoms and travel to Wuhan, the Chinese city at the epicentre of the outbreak.

“We tested all those fairly quickly and ruled them out,” Williams said, adding there is still a lot to learn about the new coronavirus.

He noted the virus comes from the same family that can lead to the common cold, and caused the outbreak of severe acute respiratory syndrome, or SARS, about 17 years ago that killed at least 774 people worldwide, including 44 in Canada.

However, Williams said the country is “much better prepared” now than it was in 2003.

“The system is on alert … and we’re monitoring,” he told The Canadian Press. “If it’s a false alarm for Canada, so be it.”

The World Health Organization has convened a group of experts to advise whether the outbreak should be declared a global emergency. The group will meet again Thursday to figure out the best way forward.

Canada’s chief public health officer said earlier this week the risk to Canadians of contracting the virus remains low, but airports in Vancouver, Toronto and Montreal — all of which have direct flights from China — would begin screening passengers as one measure of defence.

The pair say they have been in close contact with the Public Health Agency of Canada, which was established in 2004 in the wake of the SARS outbreak.

“If there is (human-to-human) transmission, it doesn’t so far seem to be as rapid or aggressive as SARS, but all these viruses are a little different in their communicability … and mortality,” he said.

Bonnie Henry, the provincial health officer for B.C., credited Chinese health officials for their early detection of the virus and its genetic sequencing, which has given authorities around the world the ability to test for it.

“We’re in influenza season, and this causes an illness that is similar to influenza, so having a test and being able to say, ‘No you don’t’ or ‘Yes you do have it — and here is what you should do,’ is incredibly important,” said Henry, who was with Toronto Public Health during the SARS outbreak.

“It really is an important step ahead from where we were with SARS.”

Communication — both among health agencies and to the front lines — is also markedly better, health officials said.

Yaffe said public health agencies, hospitals and paramedics have all received numerous memos with up-to-date information about the new virus. Front-line workers are also now asking anyone who has flu-like symptoms to take a travel history.

Health-care practitioners are also being reminded to gear up with protective masks and gloves as well as regular hand-washing — practices that not only help against this coronavirus, but also work for preventing the spread of the flu and other viruses, Henry said.

New Brunswick has issued a similar edict to its regional health authorities, according to Dr. Jennifer Russell, the province’s chief medical officer of health.

The doctors also want Canadians to be careful if travelling to China, and to tell their health-care provider if they have flu-like symptoms.

This report by The Canadian Press was first published Jan. 22, 2020.

A previous version cited an incorrect number of people killed by SARS.

Transportation shut down in city where new coronavirus originated – The Verge

TORONTO — As the new coronavirus claims more lives in China, health authorities in this country are trying to reassure Canadians that plans and procedures are in place to protect them.

While no cases have yet been confirmed in Canada, Dr. Peter Donnelly, with Public Health Ontario, said Friday that it is indeed “likely” the coronavirus, which comes from the same family of viruses as SARS, will arrive here.

However, Donnelly added that health officials are much better prepared now than they were in 2003 when SARS killed 44 Canadians. He noted communications are more robust, hospitals have better isolation facilities, and a reliable test is available to detect the coronavirus within 24 hours.

Health officials are also working with the National Microbiology Lab in Winnipeg to develop an even quicker test, and screening measures have been beefed up at major airports in Toronto, Vancouver and Montreal. In addition, everyone is being urged to practice good hygiene that helps prevent the transmission of all viruses — washing hands thoroughly, covering coughs and sneezes, and staying home if you’re sick. 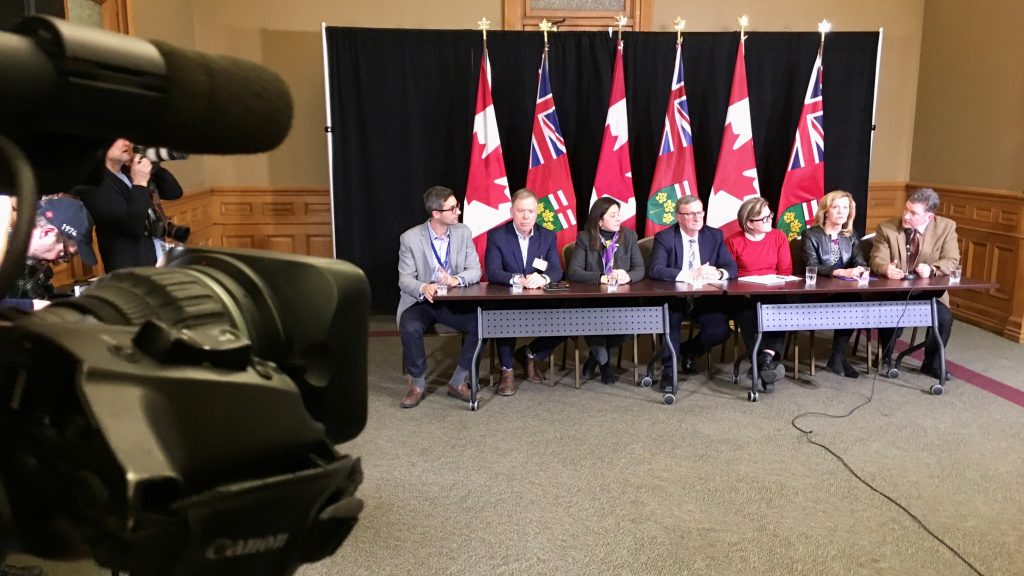 A Toronto hospital is treating a patient suspected to be the first case of coronavirus in Canada.

Dr. Barbara Yaffe, the province’s associate chief medical officer of health, says a man in his 50s who had travelled to Wuhan, China – were the virus outbreak originated – returned to Toronto on Jan. 22 was taken to Toronto’s Sunnybrook Hospital on Jan. 23 and is now in a negative pressure room.

According to Toronto Public Health, the patient is listed in stable condition.

Ontario’s Chief Medical Officer of Health, Dr. David Williams, said the “risk to Ontarians is low” and the “system is operating as it should.”

“All appropriate infection prevention and control measures were followed by both paramedics and the hospital,” said Williams. “Toronto Public Health is conducting case and contact management and Ontario is in touch with our federal counterparts to help determine exposure to other individuals on the flights.”

Health officials say the man traveled from Pearson airport to a residence using private transportation. They add the man’s wife has not shown any symptoms of the disease at this point.

The safety and security of passengers and employees is our top priority. We continue to work in close collaboration with @GovCanHealth and @CanBorder to ensure that all proper measures are taken for all international arriving passengers. https://t.co/3WHUxKEP1I

My statement on the first presumptive confirmed case of coronavirus. pic.twitter.com/DDDenJw4jT

In China, the virus has infected more 1,200 people and killed 41, reports say.

In an effort to control the spread of the illness, the Chinese government has locked down the city of Wuhan, home to over 11 million people.

Travel has been banned to and from the central-Chinese city. The government has also banned most vehicle use, including private cars, in downtown areas starting Sunday, state media reported. Only authorized vehicles would be permitted, the reports said.

Australia and Malaysia reported their first cases Saturday – four each – and Japan, it’s third. France confirmed three cases Friday, the first in Europe, and the U.S. identified its second, a woman in Chicago who had returned from China.

The new virus comes from a large family of what are known as coronaviruses, some causing nothing worse than a cold. It causes cold and flu-like symptoms, including cough and fever, and in more severe cases, shortness of breath. It can worsen to pneumonia, which can be fatal in some cases.

Here are key things to know following the first presumptive positive case of the coronavirus in Toronto:

Coronaviruses are a large family of viruses that most often cause mild-to-moderate upper respiratory tract illnesses including the common cold, but they can also lead to severe diseases. Some coronaviruses spread between animals, some pass between animals and people, and others go from people to people.

WHAT ARE COMMON SYMPTOMS?

This new virus has non-specific symptoms including fever, cough and difficulty breathing.

WHAT SHOULD I DO IF I SUSPECT INFECTION?

Consult your health care provider as soon as possible if you are worried about symptoms or have travelled to a region where severe coronaviruses are known to occur.

If you have mild cold-like symptoms, health officials encourage you to stay home while sick and avoid close contact to help protect others. Cover your mouth and nose with a tissue when you cough or sneeze, and be sure to throw used tissues in the trash and wash your hands. Clean and disinfect objects and surfaces.

With files from The Canadian Press and Associated Press.

Ontario health officials have announced that a “presumptive” case of coronavirus has been discovered in Toronto, which if confirmed would mark the first instance of the illness in Canada.

In an evening press conference at Queen’s Park, officials said they were made aware of the case Saturday afternoon.

A man in his 50s tested positive for the virus but secondary testing at Canada’s National Microbiology Laboratory will occur to confirm the case.

The victim recently travelled to Wuhan, China, which is believed to be the epicentre of the outbreak.

His condition is stable and he is being treated at Sunnybrook Hospital, officials said.

“Lab tests were conducted and at the earliest signs of a presumptive positive case, Toronto Public Health launched extensive case and contact management to prevent and control further spread of the infection.”

Elliott said officials are working to identify everyone who the victim was in contact with in order to contain the virus.

Officials said any close household contact “has been put into self isolation.”

“Ontarians can rest assured that the province’s integrated health-care system today is far more prepared to respond to any potential health risks than in the past,” Elliott said.

“We will continue to diligently monitor this issue to ensure Ontario remains prepared to identify, contain, and treat any additional cases of this virus.”

Ontario’s Chief Medical Officer of Health Dr. David Williams said the patient arrived in Toronto on Jan. 22 after flying from Wuhan with a connection in Guangzhou, China.

Williams said the patient had a family member call 911, at which point they told officials about his symptoms.

The man was transported to Sunnybrook hospital on Jan. 23.

Toronto Mayor John Tory responded to the news of the case in a statement Saturday evening.

Sunnybrook Health Sciences Centre is caring for a patient who has a confirmed case of the novel coronavirus that originated in Wuhan, China.

The patient is in stable condition and has been admitted to an isolation room. More info: https://t.co/BDLgqfjAzw

“While we now have one presumptive confirmed case, our health officials are clear that the risk to residents continues to remain low,” he said in part.

“Toronto Public Health is continuing to work closely with provincial and federal health colleagues to actively monitor the situation and respond as appropriate.”

The illness has sickened more than 1,200 people and killed at least 41 in China.

Australia and Malaysia reported their first cases Saturday — four each– and Japan, its third.

France confirmed three cases Friday, the first in Europe, and the U.S. identified its second, a woman in Chicago who had returned from China.

– With files from the Canadian Press