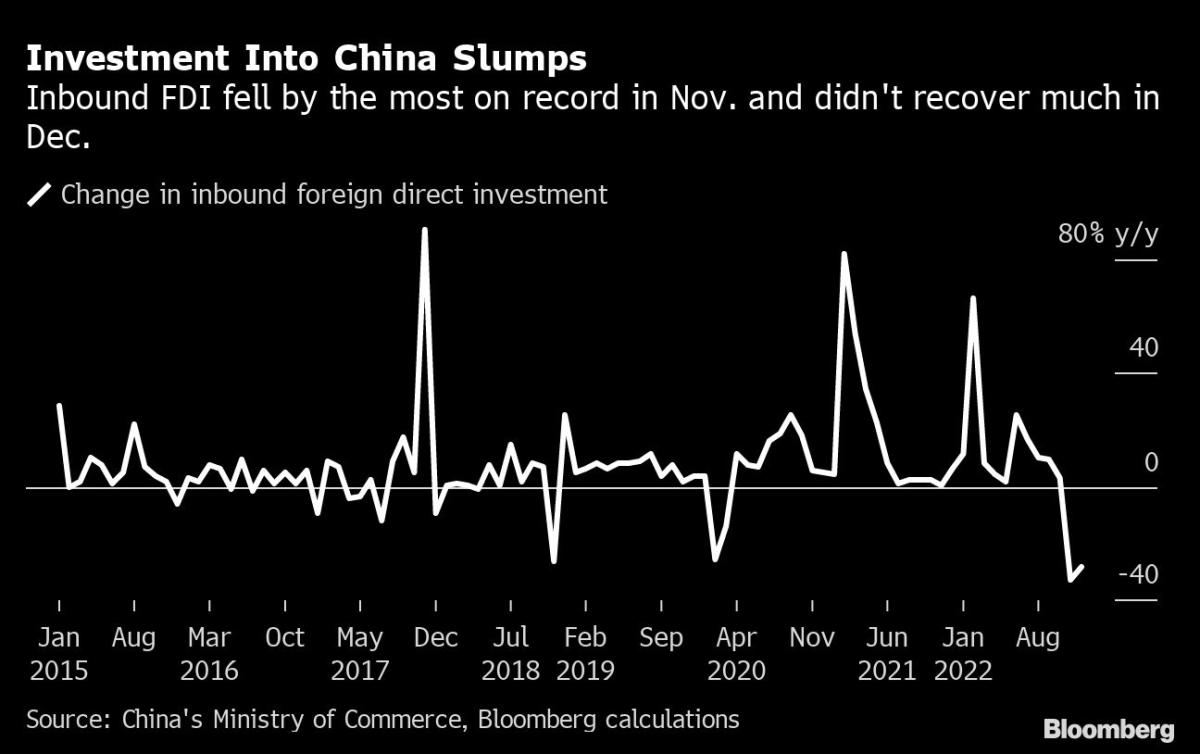 (Bloomberg) — Investment into China slumped in the final two months of last year by the most on record as the government made its chaotic exit from Covid Zero and infections spread across the country.

The 76.6 billion yuan ($11.3 billion) in actually utilized new foreign direct investment in December was almost 29% lower than the same period a year earlier, according to Bloomberg calculations based on data from the Ministry of Commerce. That followed a 33% drop in November, the largest fall in data going back to 2015.

The slumps were even worse than the drop-off in investment seen in early 2020, when the pandemic began. FDI fell nearly 26% year-on-year that February as Wuhan went into lockdown.

For all of 2022, investment rose 6.3% to a record 1.2 trillion yuan, although there was no breakdown available yet for the source of those funds. However, if the pattern from 2020 and 2021 holds, more than 70% is likely from Hong Kong — either from local investors, or from mainland Chinese or foreign investors routing their money via the city.

Foreign businesses became increasingly pessimistic about the Chinese market last year as Covid Zero lockdowns and restrictions undermined the economy and made living in China or doing business and trade with the country much harder.

Many foreign businesspeople and investors have been unable to travel to China to inspect their businesses or consider new ones for the past three years. Even now that Covid Zero is over, it’s not clear how quickly people will return given the rapid spread of infections, along with the lack of clear data on illnesses and deaths.

Companies in at least some countries seem to be wary of boosting investment. Overall, Japanese firms are taking their money out of China, with the net flow of FDI falling 4% in the first 11 months of 2022 compared to the same period in 2021, Japanese government data showed. Japanese investment into Hong Kong was down 65% over the same period.

There are some exceptions, such as Panasonic Holdings Corp. But the broader trend has been underscored by comments from the government in Tokyo, which has encouraged companies to reduce their dependence on China — a significant development, given that Japan is the largest single investor in China after Hong Kong, with a stock of $123 billion invested in the country at the end of 2021, according to Chinese data.

Chinese officials, meanwhile, have said repeatedly in recent months that they’re working to attract more investment — especially into high-tech manufacturing. An official from the economic planning agency said Wednesday that the government will remove unjustified restrictions, and will make greater efforts to attract and use foreign investment.

Chinese cities and provinces have already started visiting Japan in the month since the end of the Covid Zero policy to drum up investment. The deputy mayor of Tianjin and the Chinese ambassador both spoke Monday in Tokyo at an event to promote the city to Japanese investors.

However, political tensions and bilateral disputes may make that difficult. Just after China announced it was reopening its borders, it said it would stop processing short-term visa applications from Japan and South Korea after those nations said people coming from China would have to get tested for Covid.

Although the Chinese government reportedly soon backed down and began quietly accepting some business travelers from those nations, relations remain tense.

Financial investors were also negative on China last year, with foreigners selling a net 610 billion yuan of Chinese interbank bonds in 2022, data released this week showed. However, the reopening of the Chinese economy and borders does seem to be encouraging some new investment, with foreign stock investors being net buyers via the northbound stock connect so far this month.

–With assistance from Erica Yokoyama and Helen Sun.

Lithium Americas Corp.
LAC,
+13.19%
stock was up 9.2% in premarket trading Tuesday after it said General Motors Co.
GM,
+8.14%
agreed to invest $650 million in the company to help develop Nevada’s Thacker Pass mine, the largest known lithium source in the U.S. Lithium Americas said the project would create 1,000 jobs in construction and 500 in operations. It would produce lithium for up to 1 million electric vehicles (EVs) a year. Lithium from Thacker Pass will be used in GM’s proprietary batteries for its EVs. “Direct sourcing critical EV raw materials and components from suppliers in North America and free-trade-agreement countries helps make our supply chain more secure, helps us manage cell costs, and creates jobs,” GM CEO Mary Barra said. Thacker Pass is scheduled to go into operation in the second half of 2026, the companies said.

Investment funds that are moving to defensive positions, and some that are not – The Globe and Mail

What are we looking for?

ETFs and DIY mutual funds that made notable changes to their defensive-sector exposure over 2022.

The year is off to a great start for equity investors, with most equity indexes posting single-digit gains on a year-to-date basis, perhaps fuelled by investors’ reinvigorated confidence that the world’s central banks have inflation under control. That said, a new economic environment of higher interest rates might prompt some investors to have a look at their sector exposures, perhaps allocating more to defensive sectors for risk-reduction purposes, or to more cyclical sectors if they’re bullish on market prospects. To help identify potential candidates, I thought to analyze funds that have made noticeable moves over the course of last year. To start with, I screened the Morningstar Direct database for Canadian-domiciled equity ETFs and DIY mutual funds for those that have a reasonable track record, denoted by their Morningstar Rating for Funds or “star” rating of three stars or better, implying that the initial universe performed at least as well as category peers.

I then looked at the sector allocations of each fund as they appeared at the end of 2022 and 2021. Specifically, I used Morningstar’s “super-sector” definitions to determine which funds have the largest changes in exposure to defensive sectors. Recall that Morningstar’s classification structure for stocks divides global companies into three “super sectors”: (1) cyclicals, which include basic materials, consumer cyclical, financial services and real estate stocks; (2) defensive, which includes consumer defensive, health care and utilities stocks; and finally (3) sensitive, which includes communications services, energy, industrials and technology companies. I used the change in exposure to the defensive sector over the 2022 calendar year as the sole metric to rank the list of three-star-or-better funds.

20 funds moving into, and away from defensive sectors

This article does not constitute financial advice. Investors are encouraged to conduct their own independent research before purchasing any of the investments listed here. 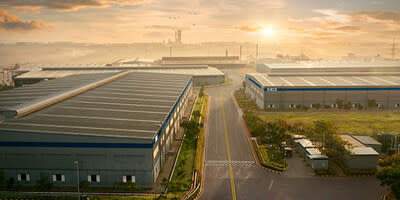 This is the latest venture between CPP Investments and IndoSpace. The first joint venture, IndoSpace Core, was established in 2017 and now owns the largest portfolio of stabilized modern logistics assets in India. CPP Investments has also invested in ILP III. Following the investment in ILP IV, the partnership will exceed US$1 billion in assets.

Hari Krishna V, Managing Director, Head of Real Estate India, CPP Investments, said, “Over the past few years, we have made numerous investments in India’s industrial space, where we see strong demand as the manufacturing sector continues to grow and the e-commerce sector matures. We are pleased to be working with our longstanding partner IndoSpace to further capitalize on opportunities in this space and believe this investment will deliver strong risk adjusted returns for CPP contributors and beneficiaries.”

Brian Oravec, Managing Partner and CEO, IndoSpace Capital Asia, said, “We are excited to extend our successful partnership with CPP Investments. CPP Investments’ commitment to ILP IV is a testament to IndoSpace’s leadership in the industrial and logistics real estate space in India. ILP IV will allow us to continue to expand our unique national network to better serve our customers. Industrial and logistics infrastructure is a key enabler of economic growth. To meet India’s aim of becoming a US$5 trillion economy by 2025, IndoSpace is excited to continue to be one of India’s key infrastructure creators.”

Canada Pension Plan Investment Board (CPP InvestmentsTM) is a professional investment management organization that manages the Fund in the best interest of the 21 million contributors and beneficiaries of the Canada Pension Plan. To build diversified portfolios of assets, investments are made around the world in public equities, private equities, real estate, infrastructure and fixed income. Headquartered in Toronto, with offices in Hong Kong, London, Luxembourg, Mumbai, New York City, San Francisco, São Paulo and Sydney, CPP Investments is governed and managed independently of the Canada Pension Plan and at arm’s length from governments. As per September 30, 2022, the Fund totalled C$529 billion. For more information, please visit www.cppinvestments.com or follow us on LinkedIn, Facebook or Twitter.

IndoSpace (www.indospace.in) is the largest investor, developer, and operator of grade A industrial and logistics real estate in India. IndoSpace has the largest national network of 50 logistics parks with 56 million square feet delivered/under development across 10 cities. With India’s largest and most experienced industrial real estate team, IndoSpace continues to lead the development of key logistics infrastructure for India’s economic growth. For more information, visit www.indospace.in and follow us on LinkedIn, Twitter, and Facebook.

Justice is a Privilege Reserved for the Few

By the numbers for British Columbia’s overdose crisis