Brown attended the Speed Art Museum Ball on March 7. Museum director Stephen Reily said in an emailed statement that two guests have now tested positive for the coronavirus, and that both were “asymptomatic” at the time. Reily did not release the names, but Mary Moss Greenebaum told WFPL she was the second case and is now symptom-free.

Reily said he consulted with Metro Louisville’s Communicable Disease department and those who public health officials consider at higher risk from possible exposure are being notified.

“This does not include either guests at the Ball generally or Speed staff members,” the statement said. “The Museum will continue cooperating with all local and regional public health and safety officials on this matter.”

The Speed Art Museum is closed until March 31. Non-essential workers are working from home, with pay, for the rest of the period, Reily said.

Brown started feeling ill a week ago and first believed she had an intestinal ailment, but went to the doctor when symptoms hadn’t subsided by mid-week, according to her attorney and friend Turney Berry. She was tested at the University of Louisville hospital on Thursday, and received the positive result Friday, Berry said. The news was first reported by the Courier Journal.

The onset of Brown’s symptoms came the day after the Speed Art Museum’s major fundraiser. Beshear said Sunday he had been tested for coronavirus following another attendee’s positive result. His test came back negative, he said.

Berry said Brown had been informing those she had been around about her illness, but was not aware of her directly informing the mayor’s office. He said he believed they would have known since Brown, who is in her early 70s, went through the city’s health department for her test. He did not know how long it took her to get the test.

Beshear tested negative, he said Sunday. Fischer said Sunday evening that he had contact with Brown and has been tested. He is self-quarantining while he awaits results.

Congressman John Yarmuth issued a statement Sunday that he has been tested after he was in the presence of an individual who has since tested positive for COVID-19. Yarmuth didn’t say who or whether the contact was at the Speed’s ball. Yarmuth said he is awaiting results.

“Upon learning this, and after consult with my doctor, I made the decision to stay at home and will self-quarantine for the remainder of this week’s District Work Period,” Yarmuth said. “As I telework from home this week, I will continue to stay in touch with Federal, State, and local officials as we all work to combat this pandemic. I continue to urge all members of the public to practice social distancing and follow all Centers for Disease Control and Kentucky Department for Public Health guidelines to keep yourselves, your families, and others safe.”

Kate Howard contributed to this report.

‘Creativity is Contagious’ is a friendly art competition for youth throughout B.C.

The theme of the artwork “must reflect finding the silver lining in difficult times.”

Youth aged 18 and younger can submit their work in four categories: performance art, handmade art, written art and digital art. Kids and teens can enter a maximum of five entries per person, and there’s a prize to be won in each category.

Winners will be chosen on April 30.

PCRS is a community service provider which offers services for education, employment, housing, substance use, mental health and youth and family support. They have various locations throughout the province.

Do you have something to add to this story, or something else we should report on?
Email: jenna.hauck@theprogress.com
Twitter: @PhotoJennalism

The operators of Open Space have been working to figure out the best way to continue sharing visual art with the community and supporting artists in need in the wake of the COVID-19 crisis.

While plans are still a work in progress, the gallery states that its key goals and focus continue to be, “to share the resources we have as an established artist-run centre to support artists in a time of need; to foster creative ways of engaging and sustaining community in a time of increased isolation; and to collaborate on exciting contemporary art projects that invite us deeper into relationship with the world around us.”

As it works to define what that might look like, Open Space is reaching out to the community for suggestions on how to make the arts meaningful at this time. It is encouraging the public to send feedback via email to openspace@openspace.ca.

The sharing of work in a open gallery format may be on hold right now, but one current exhibition by Chantal Gibson entitled A Grammar of Loss – Studies in Erasure continues online, where you can view images of her show up close.

Also, Open Space is launching a new series of land-based livestreams called Online On Land on Instagram, with weekly walks and talks from different sites within Lekwungen and W̱SÁNEĆ territories, where viewers can spend time with and learn from local Indigenous artists, educators and knowledge keepers.

The first livestream happens this Sunday (April 5) at 1 p.m. and features Songhees Nation member and artist Cheryl Bryce. The weekly schedule runs through May 10. Click here and access the stories by clicking on the Open Space logo.

The Art Gallery of Grande Prairie is giving the community a chance to get creative while self-isolating. A program called “Art at Home” kicked off on April 1st as a resource for interactive family projects and a way to showcase community art.

“In these times, when a lot of people are sheltered in place, art can still play a provocative and powerful role in people’s lives.”

The gallery has released three collections so far including drawings from Peace Country artist Euphemia McNaught. The program also launched its first at-home Carlstrom Family Green Space project, which encourages artists to create their own collages.

Erbach adds Art at Home will be the focal point of the gallery moving forward as its physical location remains closed to the public. 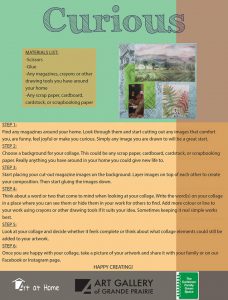 “Our mandate and our role is to contribute to the quality of life in the community. We are simply transitioning all of our activities so that people can still engage with art and still find creative things to do.”

Erbach says the gallery is looking to support the already creative community the Peace County has to offer.

“That includes some of our local businesses and entrepreneurs. These are really creative people. We’re finding a way with art to nurture that creative spark.”

Through social media, the program will feature updates on one-time projects, ongoing series, and invitations to create on the gallery’s website. A variety of posts will be made throughout the week moving forward to keep new and existing art lovers engaged until the facility opens its door again.