Richmond council is hoping to brighten up the Alexandra Greenway, just north of the Garden City Lands, with a budget of $50,000.

The city is calling local visual artists to submit applications to design a 2D piece of art for the greenway, as part of Richmond’s public art program.

That artwork would be integrated into the asphalt paving of the car-free, multi-use corridor that runs along May Drive, between Alexandra Road and Alderbridge Way. The work will incorporate reflective markings to help with visibility and travel.

“Public art in this location will help animate a safe and multi-use path and make it more engaging,” reads a city report.

Artwork for the greenway would need to incorporate a theme set by the city, reflecting, for example, Richmond’s history and natural ecology.

Of the total proposed budget for the work, $5,000 has been set aside for the artist’s fee.

The remaining $45,000 will go towards implementation expenses incurred during the work, including production, installation or taxes.

The money will come from the city’s public art reserve.

Once an artist and design has been selected, the proposed art will be brought to council for endorsement, likely this spring, with work to take place over the summer.

The Alexandra Greenway public art project and its $50,000 budget will be on the parks, recreation and cultural services committee agenda on Tuesday, Feb. 25.

The city will also be voting on the 2020 work plan for the public art advisory committee, which includes raising awareness and understanding of public art, and recommending projects to council.

Richmond first adopted a public art program policy in 1997. Since then, Richmond’s public art collection has grown to 273 works, with 192 currently on display around the city.

One of Wilf Perreault’s signature alleyways is among two dozen artworks being auctioned March 7 in a Habitat For Humanity Regina fundraiser.

When Habitat for Humanity first invited renowned Regina artist Wilf Perreault to paint a door for a fundraiser, he accepted and immediately took a trip to the ReStore.

Back then, doors were the required canvas for participating artists, and Perreault found a maple door to use as the frame for his auctioned-off piece.

Now — as reflected in the event’s title, Doors & More — items range from chairs to spoons to a unicycle to whatever else the ReStore has on hand. Even so, Perreault sticks with doors.

“It’s actually helped my other work too, in terms of composition.”

For this year’s event on March 7, Perreault is painting one of his signature alleyways, its pink-hued sky in honour of his wife Sandi and a friend’s wife, who both died from breast cancer.

Perreault’s piece is one of two dozen that will be auctioned to raise money for the non-profit Habitat For Humanity, which provides affordable housing in the community.

Kristin MacPherson isn’t usually drawn to doors. Last year, the artist chose a toolbox; this year, a vintage ironing board caught her eye.

“One of the things I really love about Habitat is the ability to walk in there and find something and just think ‘this item’s intriguing, and I don’t know where I’m going to go with it,’ and then the piece sort of becomes something,” said MacPherson.

She picked the 1940s ironing board even though she has thought all along, “I don’t really want to paint on this, because it’s so beautiful just as a piece.”

So, she’s creating a fabric collage — a fitting choice for its canvas — to be attached to the ironing board.

“It’s a bit of embroidery; I’m cutting fabrics and other materials like lace textures and things like that, and that sort of comes from my grandmother, because she was big on starching doilies and she ironed everything,” said MacPherson.

Meanwhile, Justine Schlosser chose a corkboard and some gold paint from the ReStore, and used them along with “just kind of whatever I could get my hands on.”

Her abstract painting is largely white, with metallics and small splashes of colour.

“I’ve never painted on a corkboard before and I always like to leave a little bit of the raw canvas kind of coming through, just very subtle hints of it, so that’s exactly what I did with this corkboard,” she said.

Schlosser is also participating in the new Battle of the Brushes, a live painting competition during Doors & More.

“I feel like I should be more nervous about it,” she said laughing.

She’s wondering how the 20-minute timeline will play out, since she usually paints in layers and likes to have them dry in between.

Twenty-some artists are represented in Doors & More, volunteering their time to create the artworks, and many of them attending the event.

“The thing that I love about Habitat is they include the artists in the whole process,” said MacPherson.

“It feels like you’re on a team. And I just feel like I’m part of the whole project. Normally I work in a studio by myself and it doesn’t feel like a team thing sometimes. But I know the work I do is bigger than who I am, which is pretty cool,” he said.

Schlosser enjoys giving back; she said she donates to different community fundraisers each month.

“I just think it’s good to give back to community. If it wasn’t for our strong support here in Regina, I wouldn’t have a job doing what I love.”

The Argentine black and white tegu is owned by Sarah Curry, a graphic designer from Lansing, Michigan, who sells its artwork on Etsy. She has raised $2,000 in two weeks.
Curry told CNN she got the idea after she saw her local zoo do it and wondered if it would be safe for Winston. After checking with the veterinarian to get the right type of paint, she was ready to try.
“He walked in it and just started doing his thing and made a big mess,” Curry said. 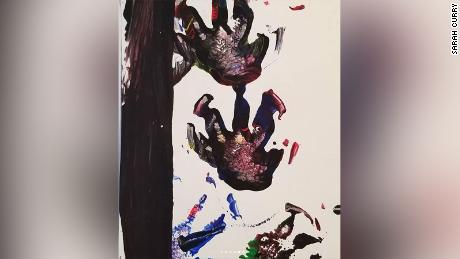 Winston is 4 feet long, weighs 15 pounds, and was once owned by someone who couldn’t care for a lizard. Winston was in bad shape and dumped off in a box at The Great Lakes Zoological Society.
“You could tell his diet wasn’t right. He was malnourished and his skin was flaky,” Curry said. “The people who had him just didn’t know what they were doing.
“He’s really hard to care for if you don’t know what you’re doing, but for me it’s easy.”
The Michigan zoo nursed Winston back to health. But when it shut down due to lack of money, Winston ended up at a rescue, where Curry adopted her pet in March 2015. She thinks the reptile is 12 years old.
It has its own climate-controlled room after destroying too many enclosures. An omnivore, it eats raw chicken, green beans and strawberries. 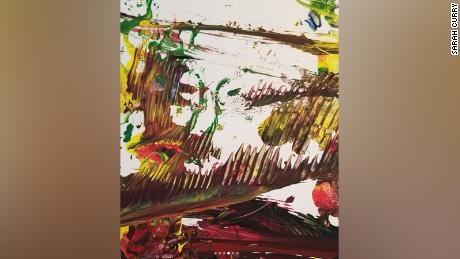 Curry said she knows a lot of people who live in Australia and she wanted to do something to help after the devastating bushfires there. She hasn’t chosen a charity for the money yet.
“All of the animals and people fighting for their lives, now they have no homes, nowhere to go,” she said.
Curry has a fresh batch of paint for more art by Winston.
“He doesn’t realize that he’s making an impact,” she said.

When you think about art, is beer the first thing that comes to mind?

Probably not, but a Winnipeg husband-and-wife team is hoping to change that.

With their Blank Canvas Beer project, Brad Chute and Jenna Khan are combining their two loves and highlighting local artists and local brewers at the same time.

“A big thing we wanted to do was take art off the walls, put it on a beer can and into the hands of beer drinkers,” Khan told 680 CJOB, “and maybe introduce two different communities who maybe know something of each other — and might learn something about each other as well in both directions.”

Their first beer, Arctic Stout, was released Feb. 13 and is a collaboration between visual artist Kal Barteski — known for her Back Alley Arctic project in the Wolseley area — and Torque Brewing’s Perry Joyal.

“We had this idea quite some time ago, and we met Kal socially, just by chance,” said Chute.

“I ran the idea by her, and she was quite excited about the idea of putting some of her art onto beer and getting the chance to show off what she can do.


“We’re calling it an ‘arctic stout’ just to tie in the polar bear imagery. It’s a stout in flavour — it’s a darker beer with lots of flavour, lots of rich, rosy notes — but Perry decided to make it as light as possible … trying to go paler and paler and paler, and I think he succeeded.”


Khan said the beer, which sold almost 1,000 cans at its launch party in Torque’s taproom, was created after a tête-à-tête between artist and brewer.

“We wanted to have a beer that was reflective of the art outside of the can and vice-versa,” she said.

“When Perry and Kal were first talking — we brought them together for a conversation — the word ‘unexpected’ was used a lot … and that’s how Kal felt the first time she ever saw a polar bear out in the wild.

“You picture them as white and fluffy and cuddly, but there are also a lot of colours to them, their skin is black … so she wanted to put something unexpected on the can as Perry wanted to inside the can.”

One week ago today we celebrated the launch of Blank Canvas Beer Co & our first collab w @torquebrewing’s Perry Joyal & artist @kalbarteski with the Arctic Stout! Do you have yours yet? #mbcraftbeer #mbartist #exploremb #onlyinthepeg #winnipeg #wpg #ywg #mb @beer_qualityinn pic.twitter.com/DaeXN1ZbtV

While this is the first Blank Canvas Beer release, Chute said they’re having preliminary discussions about a follow up, which will be a completely new collaboration.

“The idea is we want to do a new release every three or four months, sort of seasonally … we’re in the early days of talking with folks.”