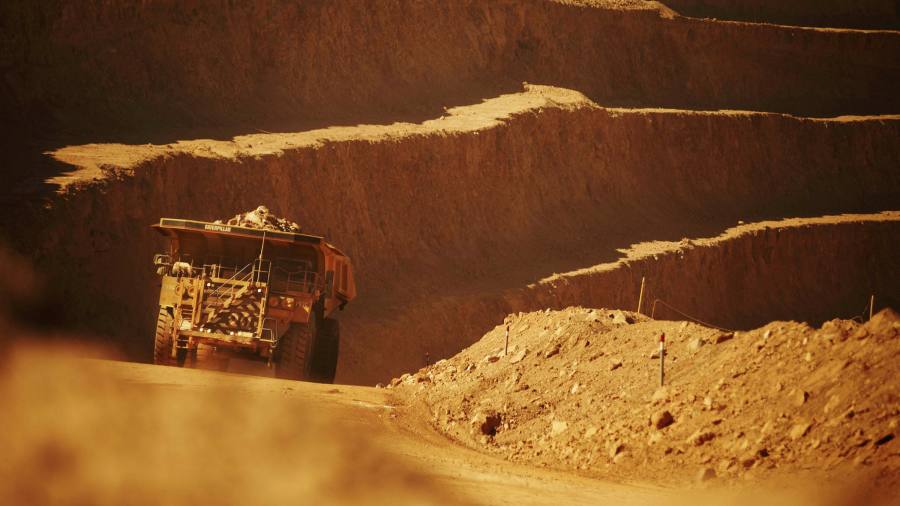 Copper hit $7,000 a tonne for the first time since 2018 on Wednesday, as strong demand in China and hopes for a wave of “green” stimulus measures lift the price of the vital industrial metal.

Benchmark copper prices trading on the London Metal Exchange reached as high as $7,034 in afternoon trading, their strongest level since June 2018. The metal, used in everything from air conditioning units to cars and power networks, has risen about 14 per cent this year, on the back of supply disruptions and China’s rapid recovery from the coronavirus pandemic.

Chinese president Xi Jinping’s pledge last month that the world’s second-largest economy would be carbon neutral by 2060 is expected to lead to a focus on renewable energy in the country’s next five-year plan, which starts in 2021. In the US, Democratic presidential candidate Joe Biden has promised a $2tn green energy and infrastructure plan if he wins the election next month.

Copper is emerging as one of the key ways for investors to gain exposure to a rollout of more wind, solar, batteries and electric cars, due to the metal’s use in electric wiring. “We believe investor interest in gaining exposure to the ‘decarbonisation’ theme is on the verge of reaching fever pitch,” said Max Layton, an analyst at Citigroup.

China’s move last month was a “massive fundamental shift” that would give a meaningful uplift to copper demand over the next two to five years, especially in China’s electricity grid, Mr Layton said.

Analysts at Goldman Sachs said metals such as copper could enter a “green-tinted bull market”.

Copper consumption in the automotive and power sectors is set to grow by 2.3m tonnes over the next five years, accounting for almost three-quarters of projected global demand growth, Mr Layton said.

On average, an electric car contains more than three times as much copper as an internal combustion car. Copper is also used in wind turbines and to connect renewable sources of generation to the grid.

In anticipation of its rising demand, China, the world’s largest consumer of copper, has been stockpiling supplies of the metal this year, according to analysts at Macquarie. Vivienne Lloyd, an analyst at the bank, estimates that China could have stockpiled 800,000 tonnes of the metal, based on the difference between imports and production. A rise in the renminbi to a two-year high on Wednesday against the dollar also makes copper cheaper for Chinese buyers.

“We do not believe that China has over-imported refined copper in 2020,” said Nicholas Snowdon, an analyst at Goldman Sachs. “The surge in refined imports has been a necessary offset to sharp declines . . . resulting from disruptions in mine supply and scrap flows.”

Copper’s rally has also been boosted by supply interruptions due to Covid-19 restrictions on mining companies. Antofagasta, the Chilean copper miner, said on Wednesday that its third-quarter production fell 4.6 per cent in the three months to the end of September from the previous quarter.

Supply could be under further pressure depending on the outcome of a constitutional referendum in Chile this Sunday. Chile is the world’s largest copper producer, from mines owned by BHP, Glencore, Anglo American and Antofagasta. Miners could face higher taxes or tighter controls on their rights over water if Chile’s constitution is rewritten, according to analysts.

Tech Stocks Are Crushing the Market This Year: Where to Invest $1,000 Today – The Motley Fool Canada

Royal Bank of Canada surpassed profit expectations in the fourth quarter amid a surge in earnings from its trading and investment banking operations that helped mitigate the impact of COVID-19 on the lender’s other branches.

The bank’s total net income inched up one per cent year-over-year to $3.25 billion in the three months ending Oct. 31. On an adjusted basis, RBC said Wednesday it earned $2.27 per share. Analysts, on average, were expecting $2.04 in profit per share. For the year, RBC’s net income fell 11 per cent to $11.44 billion.

The clear-cut star performer in the quarter was RBC’s capital markets division, where profit soared 44 per cent to $840 million. In a release, RBC attributed the growth to favourable market conditions and an increase in debt and equity offerings that boosted its investment banking team.

Credit quality also improved for RBC in the quarter, as the bank set aside $427 million for loans that could go bad, compared to $675 million in the prior quarter and $499 million in provisions a year earlier.

“While RBC came in ahead of consensus expectations, the amount can be chalked up to lower than expected provisions for credit losses,” wrote Barclays Capital Analyst John Aiken in a report to clients.

“While we do not believe that the beat, driven by provisions, will generate much outperformance, there is very little to complain about in RBC’s earnings and we believe that the fourth-quarter’s results more than justify supporting its valuation,” added Aiken, who has an overweight rating on RBC’s shares, with a $112.00 per-share price target.

RBC’s core personal and commercial (P&C) banking operations saw profit fall seven per cent to $1.5 billion in the quarter. Similar to the banks that reported on Tuesday, RBC noted the impact of lower interest rates as central banks have attempted to cushion the economic blow from the pandemic by easing borrowing costs. Higher technology costs also weighed on RBC’s P&C earnings in the period.

Profit from wealth management was down 25 per cent year-over-year, mostly due to a substantial gain from an asset sale that boosted the division a year earlier.

“Looking ahead, while it is difficult to predict how the coming year will unfold, RBC has the strength, stability and operational resilience to face a range of scenarios, and to continue creating long-term sustainable value,” said RBC CEO Dave McKay in a release. 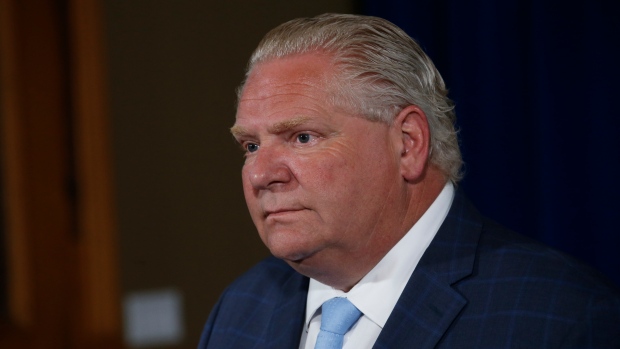 Ford returns today after he had to cancel his attendance at an announcement in Brampton, Ont. last minute on Tuesday due to an “unexpected, but non-COVID-related, non-urgent, medical appointment.”

On Tuesday, Health Minister Christine Elliott led the news conference in Ford’s place, and announced that officials planning for the rollout of COVID-19 vaccines in Ontario are now speaking directly with the manufacturers of seven different candidate vaccines.

Speaking with reporters after touring a Brampton warehouse belonging to the pharmaceutical distribution company McKesson on Tuesday, Health Minister Christine Elliott said that efforts are underway to make sure that Ontario will be in a position to distribute vaccines as of Dec. 31.

“We know this is going to be the largest logistical undertaking that we have had in Ontario in a generation,” she said. “We have to get this vaccine to every corner of this province. It is no small feat and we know we cannot do it alone.

Several of the companies, including Pfizer and Moderna Inc., have already applied for emergency use authorization in the United States but they will need to have their vaccines approved by Health Canada before they can be distributed.

British officials authorized a COVID-19 vaccine for emergency use on Wednesday, marking the world’s first science-backed shot against the disease.

Health Minister Christine Elliott will join the premier for the announcement Wednesday afternoon.

CTV News Toronto will livestream the announcement at 1 p.m. 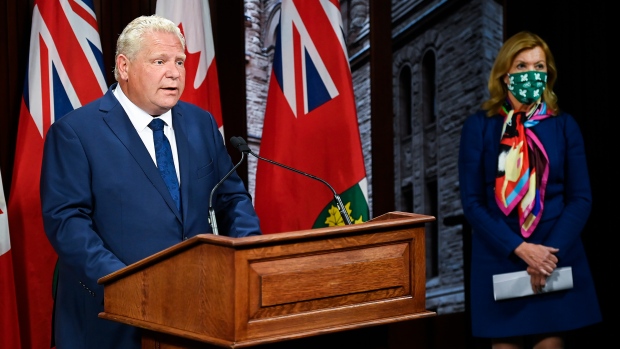 At a press conference on Tuesday Elliott confirmed that the province is speaking directly with the manufacturers of seven different COVID-19 vaccine candidates to ensure that Ontario will be able to distribute vaccines as of Dec. 31.

Elliott said the rollout of the vaccine will be “the largest logistical undertaking” the province has faced “in a generation.”

“As of yesterday we started speaking with vaccine manufacturers, including AstraZeneca, Pfizer, Johnson and Johnson, Jansen, Moderna, GSK and Sanofi. This is absolutely critical for planning,” Elliott said. “We are also working with distribution experts like McKesson and Shoppers Drug Mart who not only have the warehouse capacity for vaccines like this but also know how to get these vaccines to their networks, including hospitals and other frontline care providers.”

Elliott has previously said that Ontario expects to receive a combined 2.4 million doses of the Pfizer and Moderna vaccines by March, which would be enough to vaccinate 1.2 million Ontarians. But the federal government has not confirmed that number.

Last week, Prime Minister Justin Trudeau did say that the first doses of the vaccines would arrive in Canada in the first quarter of 2021 and that the majority of Canadians would likely be vaccinated by next September.

Trudeau also acknowledged that Canada may ultimately trail behind the U.S. and the United Kingdom in the rollout of vaccines as Health Canada still needs to approve them before they can be distributed.

On Wednesday, British officials were the first worldwide to authorize Pfizer and BioNtech’s COVID-19 vaccine for emergency use.

Pfizer said it will immediately start shipping out the vaccine and the British government said it will start inoculating residents as early as next week.