Ontario has reported a 13.3 per cent, one-day increase in the number of new COVID-19 cases in the province, a disturbing development as Ontario Premier Doug Ford considers lifting restrictions in hotspots such as Ottawa.

According to figures released Saturday by Public Health Ontario, the number of confirmed cases in the province increased by 1,015 in the preceding 24-hour period.

It was the highest single-day increase since 1,042 new cases were reported Oct. 24.

In Ottawa, according to provincial stats, 94 more people were diagnosed with COVID-19, a modest increase from the 92 diagnosed one day earlier.

Ottawa Public Health reports its own statistics, however, and its numbers were considerably different. The public health unit reported 73 new cases in Ottawa on Saturday. While there are often differences between the Ontario Health numbers and those of Ottawa Public Health, they are not usually this far apart.

A spokesperson for Ottawa’s public health unit said the discrepancy reflected the province “catching up” on cases previously counted in Ottawa.
Kim Ou said occasional discrepancies occur because several steps are involved in the classification and reporting of individuals diagnosed with COVID-19. OPH counts individuals who have received positive lab tests, whereas the province reports only those cases that OPH has officially added to its database.

According to OPH, Ottawa has recorded its 7,000th case of COVID-19.

The OPH also reported 42 patients were hospitalized, four of them in ICU. The report listed 5,973 resolved cases.

On Friday, Premier Doug Ford said the public health restrictions imposed Oct. 10 were designed as a short-term answer to rising case counts in those regions.

Spain, France and Germany have imposed national lockdowns because of soaring COVID-19 caseloads.

In Ontario, the government closed gyms and performing arts centres and banned indoor dining at restaurants and bars in the hot spots while also imposing new rules on the size of social gatherings. The restrictions were imposed for a 28-day period that’s scheduled to expire on Nov. 6.

The measures have angered some business owners, who say the restrictions unfairly target restaurants, bars and gyms without convincing evidence to back them.

A key factor in determining the extent to which restrictions will be eased will be the state of the province’s hospitals.

Montreal was the region that added the most infections — 233 — followed by the Montérégie (165) and Lanaudière (137).

The Outaouais reported 58 new cases, for a total of 2,479 since the pandemic began. There was one more death, bringing the regional toll to 43.

Fifteen new deaths were reported across Quebec: six occurred over the previous 24 hours, seven between Oct. 24 and 29 and two on unknown dates.

A total of 503 people were hospitalized with COVID-19 in Quebec on Saturday. That was 12 fewer than the previous day.

Among those in hospitals, 82 were in intensive care, an increase of one.

-With files from Postmedia and The Canadian Press

How Canada could learn lessons from Europe's 2nd wave of COVID-19 – CBC.ca

The province also recorded 29 more deaths related to the virus since its last daily update.

Health Minister Christine Elliott says 566 of the new cases are in Toronto, and 516 are in Peel Region.

Both regions were placed in the grey or “lockdown” stage of the province’s pandemic plan on Monday, but officials have said it could take at least two weeks to see any improvements related to the tougher restrictions.

Another 145 of the new infections are in York Region, with 105 and 102 in Waterloo and Hamilton, respectively.

Today’s numbers show that 595 people are currently hospitalized with COVID-19 in the province, an increase of 54 since yesterday.

The province says 155 COVID-19 patients are in intensive care units at this time, and 99 are on ventilators.

It says nearly 55,100 tests were completed since the last report, and 1,510 more cases are considered resolved.

With its high concentration of essential workers, northeast Calgary vulnerable to COVID-19

Mayor Naheed Nenshi said that as someone raised in northeast Calgary who lives there to this day, the torrent of cases feels personal.

Many people living in the region have working-class jobs at places like grocery stores, warehouses and continuing-care centres, he said. 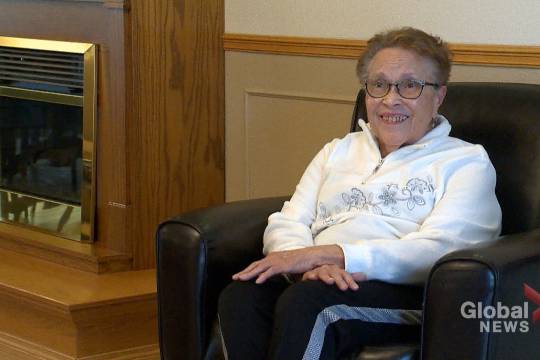 On Sunday, Alberta Health Services announced nine additional deaths linked to the virus. Eight of those deaths were at continuing care, long-term care or retirement centres.

“The people who are in these facilities who are truly vulnerable — we have again disregarded,” said David Cowling, whose brother Donald has been living at Clifton Manor for a year-and-a-half.

Donald was recently transferred to a Calgary hospital because of medical issues. Cowling said his brother is well enough to go back to Clifton Manor but there’s an outbreak in his unit.

“Society has paid a tremendous price for this and yet we haven’t protected the vulnerable. That’s the irony in all of this,” Cowling said.

“I think it has been outrageous, how this has been handled.”

“The situation is so dire in these long-term care facilities and it’s not getting a lot of attention,” Ladha said.

“We are basically taking up many hospital beds just because long-term care facilities are at a breaking point where they have no staff.

“They have COVID outbreaks and they simply can’t manage and they can’t accept residents back to the facilities.”

The president of the Brenda Strafford Foundation, which operates Clifton Manor, Conroy said the province should have brought in tougher restrictions to help stop the spread of the virus.

“I think what is required is the circuit breaker approach. Respecting the economic impact of the pandemic but if you just saw the information over the weekend in terms of shopping, the ski hills, the (anti-mask) rallies etc.,  I’m not sure it’s enough to influence behavior,” Conroy said.

He said asymptomatic testing has been “incredibly effective.”

“Over three-quarters of the positive cases we have found have been asymptomatic which is an incredibly high number,” Conroy said.

Conroy is concerned there is a bias when in comes to the age of the people who are dying from COVID-19. In Alberta, the average age is 82.

“Unfortunately, I don’t think it’s explicit; it’s implicit systemic ageism. I find that to be very unfortunate,” he said.

“We know who the most vulnerable in our society is based on the learning from the first wave of the pandemic and I think we could’ve done more to prevent the vulnerability of those in continuing care centers.”

On Sunday, AHS said one person has died and there are 11 active cases linked to an outbreak at Generations Calgary — a combined long term care and supportive living facility in the northeast end of the city.

Alberta Health has been notified of 110 cases linked to the COVID outbreak at Mount Royal Revera in Calgary. There are six active cases, 93 recovered and 11 people have died.

Cowling is calling for more resources, including more asymptomatic testing, to be provided to continuing care centres.

“There’s no reason for why this should be happening. There’s no reason why all of the suffering that we as a society have had to take to deal with. We didn’t even put in remotely the adequate resources to protect the vulnerable,” Cowling said.

There are a total of 45 outbreaks in Calgary zone long term care and supportive living facilities and 47 in the Edmonton Zone.

The country’s top doctor is asking Canadians to limit their contacts and gatherings as COVID-19 cases continue to surge in several provinces.

In a statement released Sunday (Nov. 29), chief medical officer Dr. Theresa Tam said there has been an average of 5,335 new cases daily over the past week, compared to 4,739 daily new cases from Nov. 13-19.

“More and larger outbreaks are occurring in long term care homes, congregate living settings and hospitals, and spreading in Indigenous communities and more remote areas of the country,” Tam said. “These developments are deeply concerning as they put countless Canadians at risk of life-threatening illness, cause serious disruptions to health services and present significant challenges for areas not adequately equipped to manage complex medical emergencies.”

Tam said that this time period was crucial, as the weather continues to get colder across the country and gathering indoors becomes more tempting.

“Avoid or limit time spent in the 3Cs – closed spaces, crowded places and close-contact settings and situations,” she said, as well as urging people to wear masks, stay home if they are sick and wash their hands frequently.

B.C. recorded a record-breaking 911 cases on Friday, the last day of a week that has proven to be its deadliest of the pandemic.