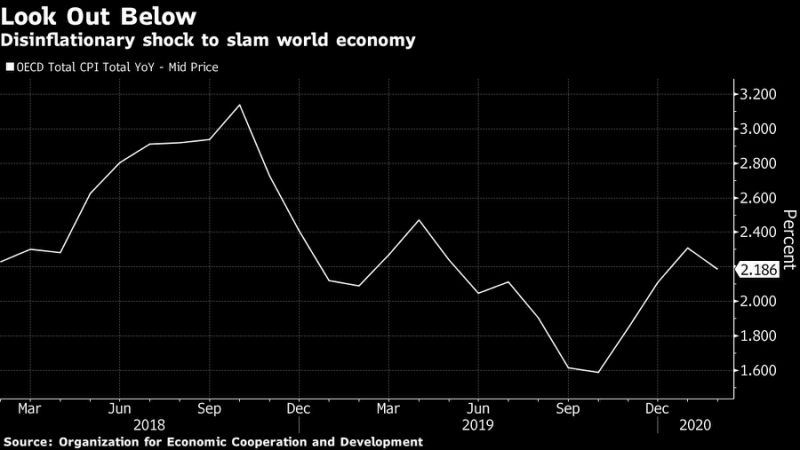 (Bloomberg) — The sinking global economy is suffering through a colossal disinflationary shock that could briefly push it into dangerous deflation territory for the first time in decades.

With many national economies all but shutting down in an effort to contain the coronavirus, prices on everything from oil and copper to hotel rooms and restaurant take-out are tumbling.

That’s worrying because it could lengthen what may be the deepest recession since the Great Depression. Ebbing pricing power makes it harder for companies that piled on debt in the good times to meet their obligations. This could prompt them to make additional cuts in payrolls and investment or even default on their debts and go bankrupt.

While weak or falling prices may seem like an unalloyed good for consumers, a widespread deflationary price decline can be deleterious for the whole economy. Households hold off buying in anticipation of ever lower prices, and companies postpone investments because they see limited profit opportunities.

Even after the coronavirus crisis eases, the scars from the shutdown — elevated unemployment, shattered consumer and company confidence, and staggered returns to work — may keep price pressures in check, prompting central banks to hold interest rates at rock-bottom levels for a protracted period.

“They’re at zero for at least the next two years,” Ethan Harris, head of global economic research for Bank of America Corp., said of the Federal Reserve.

Further down the road, though, there’s a chance that all the monetary largess — coupled with a massive outpouring of government debt to pay for measures to fight the virus — could spawn a build-up in price pressures.

“It’s possible that the response to this over the longer term could have an inflationary consequence,” former New York Federal Reserve Bank of New York President Bill Dudley told an April 2 webinar organized by Princeton University. “But in the near term, it’s very definitely on the disinflationary/deflationary side.”

Lupton and his fellow JPMorgan economists forecast that their global consumer-price index will temporarily fall below its year-ago level sometime around the middle of 2020, the first time that’s happened in many decades.

Much of that is due to plunging oil prices. Even with their rebound last week on reports of potential production cutbacks, they’re still down about 55% since Jan. 1.

But other prices are also slipping, including for services. They have long been resistant to the downward tug that prices for internationally traded goods have been subject to, but now service-sector businesses are being slammed by the shutdowns. Lupton sees worldwide core inflation — excluding food and energy costs — falling below 1% and says there’s a risk it could stay there.

While industrial countries — with the exception of Japan — avoided falling into deflation in the wake of the 2008-09 financial crisis, they’re entering this one with inflation already at depressed levels.

Perhaps the world’s biggest source of deflation right now is China, where producer prices registered a 0.4% decline in February compared with a year ago after rising 0.1% in January. That’s a drag on the price of goods being shipped overseas from the world’s biggest trading nation.

But China isn’t the only country in pain.

Chain restaurants across Japan have rolled out discount plans for takeout menus, including Yoshinoya Co., which serves bowls of beef on rice and is running a 15%-off campaign.

The British Retail Consortium reported on April 1 that shop prices fell 0.8% in March, the biggest decline since May 2018, following a 0.6% February drop.

And in the U.S., domestic air fares plunged by an average of 14% between March 4 and March 7, according to booking site Hopper.com. Average revenue per hotel room plummeted 80% during the March 22-28 week from year-ago levels, hospitality-data firm STR reported.

“In terms of our business, COVID-19 is like nothing we’ve ever seen before,” Marriott International Inc. Chief Executive Officer Arne Sorenson said in March 19 video. “For a company that’s 92 years old, that’s borne witness to the Great Depression, World War II and many other economic and global crises, that’s saying something.”

Investors seem to be looking for a long period of very low inflation, according to trading in inflation-protected securities, although some analysts caution the readings may be distorted by a dash for cash.

Even before the crisis, monetary-policy makers were worried inflation was too low for the good of their economies. Now they have even more reason for concern.

“Deflation cannot be ruled out, but I refuse to make an estimate,” European Central Bank Governing Council member Robert Holzman said. “If deflation is due to a slump in the real economy, it will be difficult to solve this through monetary-policy instruments alone.”

Some economists think it’s inflation, not deflation, that’s the problem.

“What will then happen as the lock down gets lifted and recovery ensues, following a period of massive fiscal and monetary expansion?” London School of Economics Emeritus Professor Charles Goodhart and Talking Heads Macroeconomics founder Manoj Pradhan wrote for VOX on March 27. “The answer, as in the aftermath of wars, will be a surge in inflation, quite likely more than 5% and even in the order of 10% in 2021.

“I don’t think we should be afraid of getting inflation,” Furman, who is now a professor at Harvard University, told Bloomberg Radio on April 2. “If we get inflation that would be good. That would be a good sign that we have adequate demand.”

The Economy Will Survive the Coronavirus – The Wall Street Journal

The NWT’s economy will come out of Covid-19’s initial months damaged but in better shape than other parts of Canada, the territory said on Friday.

The territorial government is forecasting a 3.3-percent contraction in its economy this year, which it says is “significantly less than the national average of 8.2 percent forecast by the Conference Board of Canada,” an economic think-tank.

Despite steep declines in the tourism and transportation industries, the territory said “steps taken to keep the diamond mines and the public sector active” had softened the pandemic’s blow.

Mining and government are by far the territory’s largest employers. The Ekati mine has suspended activities but the Gahcho Kué and Diavik mines remain fully operational.

The private sector is in worse shape. A GNWT-commissioned survey of businesses showed that 81 percent of NWT companies had experienced a “significant decrease” in revenues.

Tourism and transportation industries were the hardest-hit, telling the government they saw revenues drop by an average of 71 percent.

On the other hand, more than 90 percent of businesses surveyed by the territory in April and May reported they expected to make it through the pandemic.

Consumer spending and small business spending has rebounded since May, the territory said, and 71 percent of NWT residents surveyed were planning to travel within the territory in the next six months.

The Department of Industry, Tourism, and Investment said the results of third survey – carried out in June to examine the impact on consumer demand – is coming soon.

According to the territory, the various surveys are “part of … ongoing work to better understand the effects of Covid-19 on the NWT and how best to respond to them.”

Saskatchewan added more than 30,000 new jobs in June as businesses began to open back up from the COVID-19 pandemic.

Saskatchewan’s unemployment rate dipped to 11.6 per cent in June from a high in May of 12.5 per cent, according to a Statistics Canada report on Friday.

At the national level Canada added almost one million jobs in June.

The national jobless rate fell to 12.3 per cent, down from the record-high of 13.7 in May. There are still 1.8 million fewer jobs in Canada today than there were in February.

Jason Childs, an associate professor of economics at the U of  R, said he was pleasantly surprised by the employment gains.

“To be gaining 30,000 jobs provincially and nearly a million jobs nationally is some unexpected good news, which is nice for a change,” he said.

Childs cautioned that the jobless rate in the province is still more than six per cent higher than it was at this time last year, when it was 5.2 per cent, and there still about 40,0000 fewer jobs than before the pandemic.

“[Some people] don’t appreciate how deep the hole we’re in is and this is not a hole we’re going to get out of quickly,” Childs said. “[Unemployment] has more than doubled from this time last year.”

All those job losses have not been evenly distributed throughout the population.

Young workers are taking the brunt of the job losses in the province.

Unemployment among First Nations is 18.4 per cent and the Métis jobless rate is 17.3 per cent.

Childs said both those groups already have higher unemployment and they will have a harder time getting back in the workforce.

“People looking for that first job are going to have a really tough time right now because anything that opens up you’re probably going to be competing with somebody who’s got a lot more experience,” he said.

The one sector hit hardest by the pandemic is food and accommodation, where an estimated 400,000 workers across the country are still without a job.

Childs said those jobs are dependent on consumer spending and tourism, and that people’s financial habits have changed during the pandemic.

“I still think we’re going to see a drag [on the economy] as we get what’s called the Paradox of Thrift,” Childs said.

“As people begin to save for their own protection we may see that drag on economic activity as consumption falls off.”

He said people are beginning to cut back on ‘luxuries’ like going out to eat or grabbing a cup of coffee.

“That’s a place where you can cut back fairly easy,” he said.

“People are dealing with a massive amount of uncertainty right now and uncertainty breeds caution and doesn’t breed spending.”

Childs said no amount of fiscal stimulus is going to solve this crisis without consumer confidence.

“You need to get people back to a place where they feel comfortable and safe spending in order to return to the previous level of economic activity,” he said. “Or we’re just gonna have to get used to this.”

COVID-19 has put Canada in a “deep fiscal hole,” and the only way to get out of it is to spark the oil and gas sector, Premier Jason Kenney said Friday.

“When the global economy comes back from COVID, when demand returns for oil and gas, we are going to see something of a supply shortage, because of the upstream exploration that has been cancelled,” he said at a Friday news conference.

“So we’ll see prices go up, and that will be a great opportunity for Alberta especially as we make progress on pipelines,” Kenney said.

At Friday’s market close, West Texas Intermediate crude was priced at just over US$40.

TC Energy’s Keystone XL pipeline, which the government of Alberta has committed $7 billion in financial support, faced a legal hurdle this week when the U.S. Supreme Court refused to let construction begin on the project.

'We have had record sales,' Real estate market has dramatic rebound in cottage country – CTV News