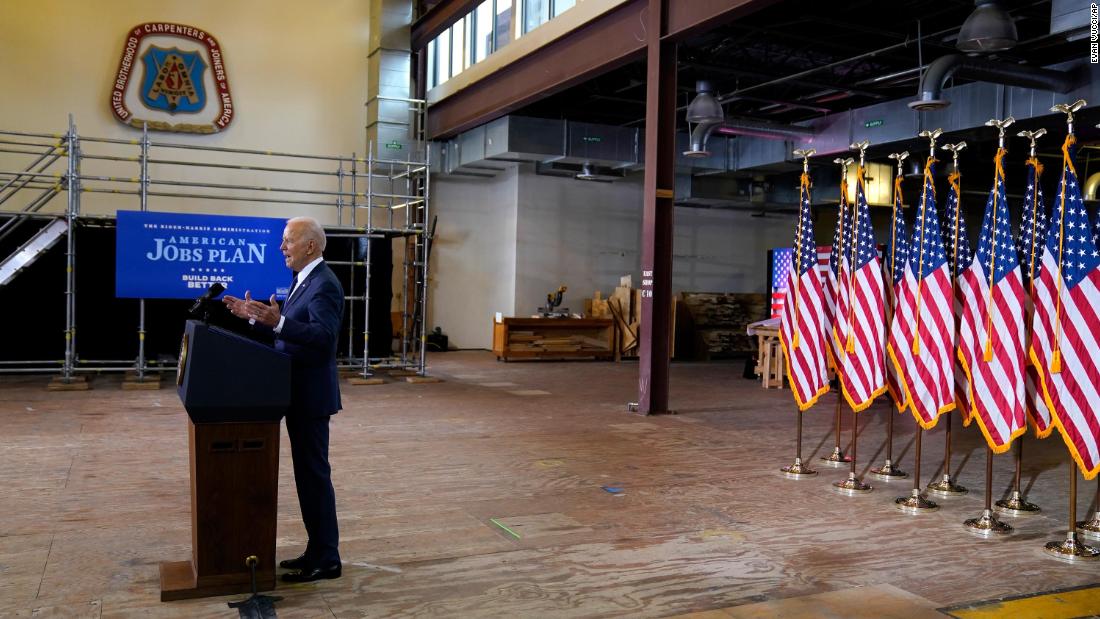 That’s why President Joe Biden’s “Build Back Better” economic plan has so energized the White House, his party and outside allies. The new President and congressional Democratic majorities have a chance, finally, to make it happen.
The scale of his proposals reflects pent-up demand that years of thwarted ambition have produced. Actions to curb income inequality and boost middle-class wages were already at the center of Democratic debates before the last year brought them into even sharper relief.
“The pandemic just blew it all wide open,” observed Cecilia Rouse, who chairs Biden’s Council of Economic Advisers. “The opportunity cost of not doing anything has become extremely obvious.”
The $2.25 trillion American Jobs Plan Biden outlined last week was just the start. It invests in transportation, manufacturing, schools, broadband, water systems, care-giving services and energy transformation to curb climate change.
The comparably-priced American Family Plan coming later this month is at least as significant. Building “human capital” through investments that include universal early education represents a cornerstone of Democratic dreams of reducing poverty, increasing racial equity and fostering long-term prosperity.
“We have a tremendous amount of evidence, accumulated for years, that the basis for success in education and careers and high-productivity jobs is linked to what happens in the first five years,” said Laura D’Andrea Tyson, a University of California, Berkeley professor who chaired President Bill Clinton’s Council of Economic Advisers. “We’ve argued and argued. Finally, we have a moment in time in terms of popular support and Democratic control to do it.”
When Biden came of age after World War II, the federal government invested much more in components of economic growth than it does now. Money for President Dwight Eisenhower’s federal highway program, President John F. Kennedy’s space program, and President Lyndon Johnson’s Great Society swelled the part of the budget classified as investment — capital spending, research and development, and education and training — to more than 6% of the size of the entire economy.
But federal investment has trailed off since. The mammoth Social Security and Medicare retiree benefit programs — created by Franklin Roosevelt and Johnson, the transformative presidents Biden seeks to emulate — have consumed an increasing share of federal spending.
Meanwhile, the political ascendance of conservatives led by President Ronald Reagan squeezed the rest of the budget as they sought to discredit government, shrink it and cut taxes. The White House budget office projects this fiscal year as the tenth in a row, and 23rd of the last 25, with federal investment at levels half or less of its 1960s peak as a share of the economy.
Biden’s Democratic predecessors have struggled to resist the trend. Clinton made deficit reduction the hallmark of his first two years, then saw austerity-minded Republicans win control of Congress.
President Barack Obama enacted significant public investments in his 2009 stimulus responding to financial crisis and recession. But Republicans recaptured the House the next year, forced caps on spending, and blocked Obama’s requests for additional investments in infrastructure and early childhood education.

‘A tiny window of opportunity’

Democrats now dare to hope the pendulum has swung back in their direction. Before Biden defeated him, Donald Trump, too, emphasized the long-run economic struggles of what he called “the forgotten people.”
The disparate economic effects of the pandemic deepened and underscored the problem. Democrats say the robust fiscal response, including the $1,400 per person checks in Biden’s $1.9 trillion Covid-19 relief plan, has begun rebuilding long-lost trust in Washington.
“People are now seeing how government can be on their side,” said Sen. Sherrod Brown of Ohio. “That changes everything.”
But Biden risks losing Congress in 2022 just as Clinton and Obama did in the midterms following their elections. Assuming the chances of Republican cooperation are slim-to-none, Democratic allies invoke that possibility as a now-or-never rallying cry for the unity needed to pass his plan on their own.
“It’s a tiny window of opportunity,” tweeted Robert Reich, Clinton’s former labor secretary. “So be bold, damn it.”
Biden’s plan is nothing if not bold. In 2019, non-defense federal investments totaled $337 billion. If enacted, the White House proposals would more than double that for years.
The President redoubled his case Friday even while hailing strong job growth that brought March unemployment down to 6%. Rather than just fix immediate damage, he seeks to fundamentally upgrade key features of the economy.
As Rouse put it: “Sometimes you can repair the roof. Eventually you have to replace the roof.”
The difficulty of pushing through so much spending, and tax increases to finance it, will require intensive negotiations with Congress. Republican economists who acknowledge the potential of public investment warn the process of corralling votes can thwart it.
“It is a sound theory in principle,” observed Greg Mankiw, who chaired President George W. Bush’s Council of Economic Advisers and now teaches at Harvard. “The key question is whether, in practice, the political system succeeds in targeting investments with high return rather than producing ‘bridges to nowhere.'”
The return on Biden’s investments would take years to tally in any event. But he’ll enjoy one immediate political advantage if Congress delivers them.
Forecasters already predict the economy will surge over the next two years even without additional legislation. So voters will render their initial verdict on his agenda in the warm light of strong economic growth.