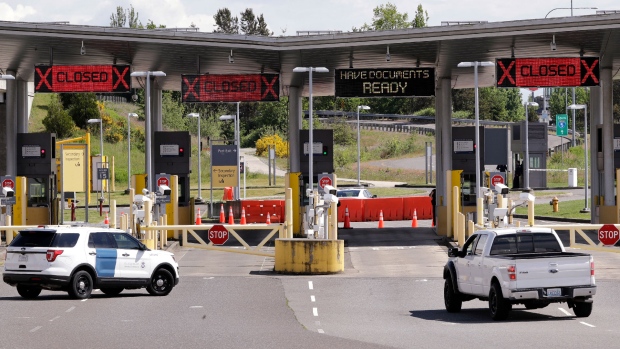 WASHINGTON —
Fully vaccinated U.S. citizens wasted little time Monday seizing their first chance in 17 months to venture into Canada, while lawmakers south of the border urged the White House to hurry up and follow Ottawa’s lead.

As of 12:01 a.m. Monday, American citizens and permanent residents were allowed back on Canadian soil, provided at least 14 days had elapsed since receiving a full course of a COVID-19 vaccine approved by Health Canada.

“I’m honestly just relieved to be here,” Kansas resident Tom Hanson said during a stopover at Toronto’s Pearson International Airport, where he was en route to a long-delayed conference in Edmonton.

“There weren’t a lot of flights, so I had take the longer route.”

To be eligible, travellers must also live in the U.S., use Canada’s ArriveCAN app or web portal to upload their vaccination details and show proof of a negative molecular test that’s no more than 72 hours old.

David Plotkin, who flew to Toronto from Atlanta to see his brother and pregnant sister-in-law, was relieved to get the chance to visit again when he did.

“It’s a weight off my shoulders, honestly, to be able to see them,” Plotkin said. “It’s the kind of thing you hate to miss if you can help it.”

John Adams, a Florida resident who has been waging a relentless advertising campaign against the travel restrictions, said he was expecting to be back at his property on Vancouver Island before the supper hour.

“So far, our experience has been totally hassle-free given the substantial new requirements,” Adams wrote in an email from the airport in Tampa.

The restrictions had barely been eased 10 minutes before Adams got text messages from two separate people who had already crossed — one at the Peace Bridge in Buffalo, N.Y., the other in B.C.

“I asked both to rate their border crossing on a scale of one to 10 and both rated it as a 10.”

Travellers likely felt differently at the Fort Frances bridge between northern Ontario and Minnesota, where CBSA was reporting a seven-hour delay. Crossing from Maine to New Brunswick was taking upwards of four hours.

Elsewhere across the country, midday delays at various land crossings ranged from just a few minutes to nearly an hour.

“The CBSA continuously monitors traveller volumes and wait times to allocate resources and adjust staffing levels during peak travel periods,” the agency said in a statement.

“Travellers should plan for the possibility of additional processing time when crossing the border due to the enhanced public health measures.”

Fully vaccinated travellers who have recovered from the disease and are otherwise eligible to enter Canada can show proof of a positive molecular test taken between 14 and 90 days before crossing the border.

About half had to be turned away during the first week because they hadn’t received a Health Canada-approved vaccine, or had not waited the full 14 days after their last shot before travelling.

Canada has approved four vaccines: Pfizer-BioNTech, Moderna, the Oxford-AstraZeneca shot, also known as Covishield, and the single-dose Johnson & Johnson option. All except AstraZeneca have been approved and widely deployed in the U.S.

As of now, border agents won’t be setting up separate queues for vaccinated and unvaccinated visitors — Vinette said a pilot project last month found that doing so had a negligible impact on wait times.

It took just as long — and sometimes longer — to ensure that travellers claiming to be fully vaccinated were indeed eligible to skip the otherwise mandatory 14-day quarantine, he said.

However, as both travellers and agents grow accustomed to the new rules, separate lines could be put in place in the future as travel volume increases.

“If it brings particular flow and additional relief in some of our constrained operations, then we will look at it at that time, but it’s not currently in place.”

The U.S. has so far resisted easing restrictions on non-essential travel at land crossings, and won’t say when that might change. Air and sea travellers are exempt, though passengers by rail, ferry and pleasure boat are not.

Critics of that lack of action were quick to point out the discrepancy Monday.

“We should work in a co-operative way to find out how we can meet in the middle ground,” Pennsylvania congressman Dwight Evans told an online panel hosted by the Canadian American Business Council.

“I believe that it can be done, and I think it is something that we just have to kind of get our heads together (on).”

New York Rep. Brian Higgins, one of the most persistent congressional voices on easing restrictions in the Canada-U.S. corridor, reiterated his demand for a U.S. plan to let travel resume.

Keeping the restrictions in place “harms separated families and hurts opportunities for economic recovery,” Higgins tweeted. “The time to act is long overdue.”

U.S. border communities have been “decimated” by the restrictions, “with steep losses in employment, wages and sales tax revenues, among other economic impacts,” says a new report from the Border Policy Research Institute at Western Washington University in Bellingham, Wash.

The White House is exploring whether, when the time does finally come, to require visitors from outside the country to be fully vaccinated, although it is unclear whether that discussion specifically includes Canadian travellers.

The Canadian government is currently planning to allow vaccinated visitors from outside the U.S. to come to Canada for non-essential reasons as of Sept. 7.

This report by The Canadian Press was first published Aug. 9, 2021.

Canada to extend ban on arriving passenger flights from India

The Canadian Armed Forces is facing calls to return Maj.-Gen. Dany Fortin to duty after the senior officer, who previously oversaw the Canada’s COVID-19 vaccine rollout, was acquitted of sexual assault.

The military says it is considering the implications of the ruling, which was handed down by a Quebec civilian judge on Monday following a high-profile trial.

Fortin’s lawyer, Natalia Rodriguez, says her client is ready, willing and able to return to service after being essentially put on paid leave for more than a year.

But Rodriguez also says that Fortin’s career and reputation have suffered as a result of the allegation against him, and the way it was handled by the Liberal government and the military.

Retired colonel Michel Drapeau, who is now a lawyer specializing in military cases, says the acquittal should pave the way for Fortin should be immediately assigned to a new role with full duties.

But he and others say the government may instead offer a settlement in return for Fortin’s retirement, similar to what happened when the breach of trust case against vice-admiral Mark Norman was dropped in May 2019.

A government lawyer is telling a Federal Court hearing that the Charter of Rights and Freedoms does not obligate Ottawa to repatriate Canadians held in Syrian camps.

Family members of 23 detained Canadians are asking the court to order the government to arrange for their return, saying that refusing to do so violates the Charter.

Federal lawyer Anne Turley told the court today there is no legal obligation to facilitate repatriation of these Canadians in the Charter, statute or international law.

A handful of women and children have returned from the region in recent years, but Canada has, for the most part, not followed the path of other countries that have successfully repatriated citizens.

Even so, Global Affairs Canada recently determined that six women and 13 children included in the court case have met a threshold under its policy framework for providing extraordinary assistance — meaning Canada might step in.

The Canadian citizens are among the many foreign nationals in Syrian camps run by Kurdish forces that reclaimed the war-torn region from the extremist Islamic State of Iraq and the Levant.

The Federal Court of Appeal says it will uphold all but one of the rules that bolster compensation for air passengers subjected to delayed flights and damaged luggage.

Air Canada, Porter Airlines and several other parties had argued that the passenger rights charter launched in 2019 violates global standards.

The appellants argued the charter should be rendered invalid for international flights.

But the court has ruled to dismiss the appeal, aside from the regulation that compensates passengers for the temporary loss of baggage.