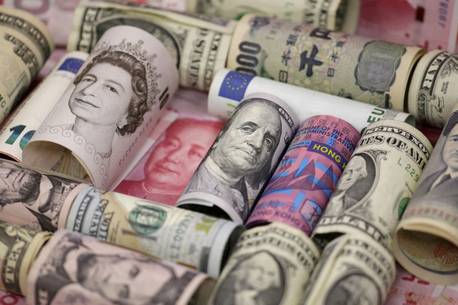 TOKYO (Reuters) – The dollar held firm at the start of a holiday-thinned week on Monday, as U.S. data pointed to solid economic growth while the British pound bounced slightly after having suffered its biggest weekly fall in three years.

A batch of economic data published on Friday showed the U.S. economy, already in its longest expansion in history, appears to have maintained the moderate pace of growth as the year ended, supported by a strong labor market.

Gross domestic product increased at a 2.1% annualized rate, the Commerce Department said in its third estimate of third-quarter GDP. That was unrevised from November’s estimate.

“The U.S. economy appears to have stopped slowing. There is no indication it will be hitting a recession,” said Ayako Sera, market economist at Sumitomo Mitsui Trust Bank.

Earlier this year, investors were spooked by fears over the possibility of a U.S. recession when the U.S. yield curve inverted, which has been historically one of the most reliable signs of a U.S. downturn.

That contrasted with an unexpected deterioration in German consumer sentiment.

The dollar has been supported by optimism over the global economy since Washington and Beijing came to an interim trade agreement earlier this month.

China said on Monday it would lower tariffs on products ranging from frozen pork to some type of semiconductors next year, as Beijing looks to boost imports amid a slowing economy and a trade war with the United States.

Against the yen, the dollar changed hands at 109.41 yen , little changed on the day and not far from a six-month high of 109.73 touched earlier this month.

“One thing to look at is whether market players cut their (yen-short) positions ahead of the holiday period on concerns there could be a flash crash like a year ago,” said Minori Uchida, chief currency analyst at MUFG Bank.

The dollar tumbled as much as 4.4% on the second trading day of this year as a lack of yen liquidity, due to a Japanese market holiday, amplified the dollar/yen’s fall sparked by a rare revenue warning from Apple Inc .

Currency speculators have cut their net short positions in the yen slightly in the week that ended last Tuesday after having increased bets against the currency constantly for a few months, data from the U.S. financial watchdog showed on Friday.

Some noted concerns over increasing tensions between North Korea and the United States.

North Korean leader Kim Jong Un held a meeting of top military officials to discuss boosting the country’s military capability, the state news agency reported on Sunday amid heightened concerns the North may be about to return to confrontation with Washington.

The United States, Mexico and Canada will next week hold their first formal talks on their continental trade deal, with particular focus on labor and environmental obligations, the U.S. government said on Friday.

Trade ministers from the three nations are set to meet virtually on Monday and Tuesday to discuss the U.S.-Mexico-Canada (USMCA) deal, which took effect in July 2020.

“The ministers will receive updates about work already underway to advance cooperation … and will hold robust discussions about USMCA’s landmark labor and environmental obligations,” the office of U.S. Trade Representative Katherine Tai said in a statement.

The United States is also reviewing tariffs which may be leading to inflation in the country, economic adviser Cecilia Rouse told reporters at the White House on Friday, a move that could affect hundreds of billions of dollars in trade.