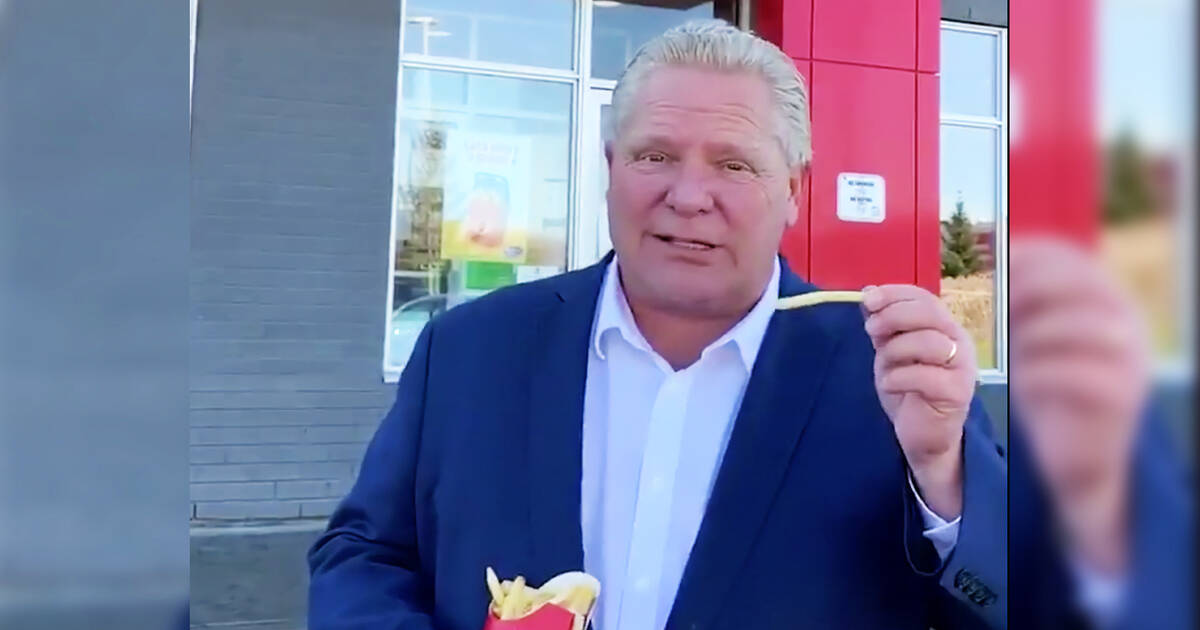 Doug Ford’s food weaknesses appear to include not only cherry cheesecake, but a good ol’ greasy McDonald’s feed, if his latest social media posts are any indication.

The premier last week shared a video of himself going through the drive-thru of the fast-food giant’s Minden location, during which he took the opportunity to tell excited employees about the government’s new plans for improving internet service in Ontario. He also told them that they’re doing a great job.

The clip, now viewed more than 70,000 times on Twitter, elicited a ton of response, including some laughs and also a bit of confusion about why, exactly, he decided to post about such a seemingly random interaction.

Stopped in for some McDonalds on my way to #Minden. Today we have a great announcement on #broadband and the locals are happy to hear it! pic.twitter.com/yBRQfj9TNu

And now, six days later, Dougie has taken to social media yet again to post about another visit to a McD’s, this time to help promote the company’s Fries For Good initiative.

“I encourage you to come by McDonald’s and buy an order of fries [for] Fries For Good, from November 10th to November 30th,” he says to the camera while munching on a large order of them in front of the golden arches, like a true influencer.

The post has led many to speculate about what Ford’s relationship with the chain is as of late: simple devoted fan, or paid promoter.

From Nov 10 – 30, @McDonaldsCanada is donating a portion of every purchase of french fries to Ronald McDonald House Charities. #FriesForGood will help provide a place for families to stay together when they have to travel for their sick child’s treatment. #FFG pic.twitter.com/X3T83FcxCT

“Curious is this paid ad, on public dime?” one user replied.

“Hey Doug cut back on the McDonald’s! Here’s an idea, support the small independent Canadian restaurant instead. Isn’t that what you are always preaching to us!!!” another chimed.

And yet another: “Disgusting you use government platform & the Office of the Premier to shamelessly promote a fast food corporation to pad their profits.”

The videos follow some of Ford’s earlier attempts at forays into vlogging, such as his pumpkin carving tutorial around Halloween or his contentious cherry cheesecake recipe vid, which indicate that he may just be trying to have some fun on social media amid trying times.

Though his motives remain unclear — neither the Premier’s Office nor McDonald’s Canada replied to blogTO with any further info — we’ll have to wait and see what other quirky stuff he gets up to on socials, and whether it continues to feel oddly promotional.

But Duane Bratt, political scientist at Mount Royal University, said the UCP government is using its own “hyper-partisan” press secretaries and issues managers to silence critics by focusing on party identity, labelling them as biased or affiliated with the NDP or prime minister.

“That allows the more unsavoury people to then go off with racist, homophobic, misogynist comments. Those are not coming from the premier’s office … but by coming out with partisan critiques, it opens the door and targets people that the more crazy ones will then go after you.”

Bratt doesn’t agree with comments Ogbogu made about the leak in Dr. Deena Hinshaw’s office, but criticizing his arguments is different than attacking him personally, he said.

In the 1980s in federal politics, the Liberals used some backbenchers as “attack dogs,” and Pierre Poilievre is used by Conservatives in a similar way. Now the UCP is putting its issues managers and press secretaries forward to fulfil a similar role, Bratt said.

“I think it is a deliberate strategy in distancing yourself in those sorts of attacks and using people like Matt Wolf as your pitbull, as your attack dog,” he said. “It’s a way of saying it’s not the leader, it’s these other people. This has always been a strategy, but instead of using … MLAs or backbenchers, you’re using political appointees.”

Bratt has been doing public commentary for decades, and he’s no stranger to people disagreeing with him. But he’s seeing more antagonism, in general, because of a divide in public opinion on pandemic and from COVID-19 deniers. He also sees more women and people of colour facing more pushback online.

SYDNEY (Reuters) – Australia’s Prime Minister Scott Morrison said on Monday Canberra is seeking an apology from Beijing about a Tweet containing a false image of an Australian soldier holding the knife to the throat of an Afghan child.

Morrison said Australia was seeking the removal of the “truly repugnant” image posted on Monday by Zhao Lijian, a spokesman at the Ministry of Foreign Affairs.

“It is utterly outrageous and cannot be justified on any basis… The Chinese government should be utterly ashamed of this post. It diminishes them in the world’s eyes,” Morrison told media at a press briefing.

He said countries around the world were watching how Beijing responded to tensions in Australia’s relationship with China.