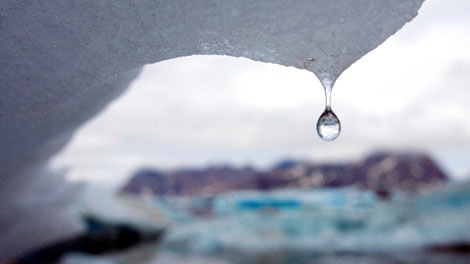 TORONTO —
A 37-year-long study shows that the Earth’s fluctuating cryosphere – the area of the planet covered in ice and snow – averages a net loss of 87,000 square kilometres each year, with researchers attributing it to climate change.

The study, published in a journal by the American Geophysical Union, was done by researchers who calculated the size of the cryosphere on a daily basis between the years of 1979 and 2016 and later averaged out the yearly estimates.

“The cryosphere is one of the most sensitive climate indicators and the first one to demonstrate a changing world,” Xiaoqing Peng, co-author of the study and physical geographer at Lanzhou University, said in a media release. “It’s change in size represents a major global change, rather than a regional or local issue.”

Still, researchers said that the overall shrinking of the cryosphere was a signal of climate change.

When looking at how long the cryosphere was frozen for, the study shows that a large proportion of it remained frozen for a shorter period of time over the years.

“The average first day of freezing now occurs about 3.6 days later than in 1979, and the ice thaws about 5.7 days later,” the study said.

The cryosphere is intended to reflect sunlight off its surface to cool the Earth, therefore the study says that the shrinking of this area could lead to global changes in air temperatures, sea levels, and ocean currents.

Astronomers discover record-breaking stars as small as the Moon but heavier than the Sun – Texasnewstoday.com

The CST-100 Starliner capsule has passed its flight readiness review (FRR) for the upcoming liftoff, which will kick off the uncrewed Orbital Flight Test 2 (OFT-2) mission to the station, NASA and Boeing representatives announced today (July 22). Read the full story here.

Over the weekend, engineers mated the Starliner spacecraft to its Atlas V rocket, marking a key milestone ahead of the mission’s launch next week. See the photos here.