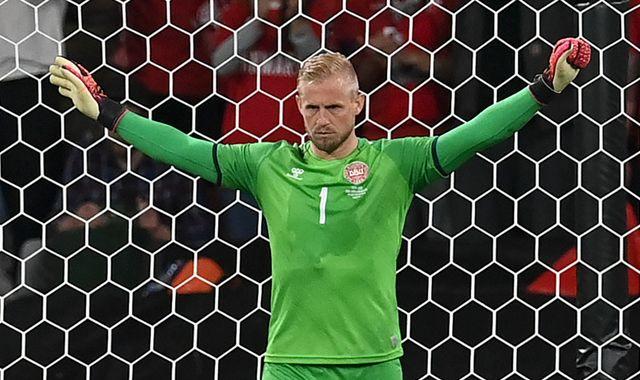 UEFA has opened disciplinary proceedings against England after fans shone a laser at Denmark goalkeeper Kasper Schmeichel during the Euro 2020 semi-final and booed the Scandinavian country’s national anthem.

A laser pointer was directed at Schmeichel before he saved Harry Kane’s extra-time penalty – only for the England captain to score the rebound.

UEFA is also investigating the lighting of fireworks inside Wembley stadium during the match.

Prime Minister Boris Johnson’s official spokesman condemned the use of the laser by a supporter.

“UEFA are looking into that, that’s a matter for them but it’s not something we would want to see,” Mr Johnson said.

He also urged fans not to boo teams during their national anthem.

England won the semi-final tie 2-1 last night after a match where they had the lion’s share of the chances.

They will now face Italy, who are unbeaten in nearly three years, in the final at Wembley on Sunday.

If England secure victory it will mark the first time they have won a major tournament since the World Cup in 1966.

Three Lions manager Gareth Southgate has said his team deserve to be in the final, after Denmark boss Kasper Hjulmand said he believed England should never been awarded the penalty that helped secure them the tie.

Southgate said: “We were so smooth through the quarter-final and relatively unscathed through the second round.

“We knew that at some point we were going to concede and we would have to respond.

“Denmark have had an incredible tournament. I have got to give them huge credit.

“But I think on the balance of play when you look at the number of saves we forced the goalkeeper to make and long periods of the game where I felt we were the biggest threat, I think we deserved it.”

The all-important spot kick was awarded after England attacker Raheem Sterling was judged to have been tripped in the area, with the decision confirmed by VAR.

You wouldn’t have found any England fans questioning the penalty decision, and there were wild celebrations around the UK as they watched Southgate’s side make history.

In London’s Piccadilly Circus people were pictured on top of buses, while euphoria in the Trafalgar Square fan zone rivalled the celebrations inside Wembley seven miles away.

And across the nation, streets were strewn with empty plastic pint glasses, food cartons, laughing gas canisters and other rubbish when the celebrations had died down.

Thousand of England fans will now be desperate to know if they can get their hands on tickets for the historic match.

Social distancing rules and travel restrictions have meant many fans have been unable to watch their side play live during the delayed tournament.

And some of those who got seats in the initial ballot were left disappointed when they lost their tickets due to reduced stadium capacities.

Lightning to have boat parade as part of Stanley Cup celebration – Sportsnet.ca

The Edmonton Oilers trading down on Day #1 of the NHL draft was converted not 24 hours later into Defenceman Luca Munzenbeger.

Gotta love the name! Munzenberger is an 18-year old out of Dusseldorf, Germany. He has a late (November) 2002 birth date.

Munzenberger spent the majority of 2020-21 with Kolner Junghaie of the DNL U20. In 6 games he went 1-2-3 and served as Team Captain. His time in junior versus pro left open the door for him to play in college. Munzenberger also played for Team Germany at the World Junior Hockey Championships in Edmonton (0-0-0 in 5GP). More on that in a minute…

Munzenberger is considered to be an excellent PK man, but possesses a big shot which makes him a threat from the point as well. Scouts say he has a soft set of hands and makes an effective first-pass out of his own zone. Those who have seen him play, namely amateur scout Brock Otten, describe the kid as a “suffocating physical defender” with a mean streak. He’s an above-average skater for his size with a massive stride and a big wingspan. He’s effective at clearing the slot and his reach helps him get to pucks ahead of attackers. In my own viewing of his highlights from the WJC’s, Munzenberger closes quickly and effectively on the opposition along the walls. The foot-speed, reach and size are visibly key tools in his ability to break up the cycle.

A side note from that tournament that may indicate the quality of his intangibles: Munzenberger was in COVID quarantine at the very beginning ot the WJ’s, but emerged from that status prior to Christmas and rebounded with a strong performance. That would seem to speak to the kid’s resilience. The young man in a foreign country responded to a stressful situation and considerable uncertainty extremely well.

Draft analyst Steve Kournianos says of him: “A big bodied vacuum cleaner on defence… He has ideal size but the mobility and agility to cover faster players… He plays a mean, physical brand of hockey and can be considered a throwback… He has soft hands and delivers clean passes to any area in the offensive zone, but what makes Munzenberger dangerous is his lethal shot — he owns a bomb of a shot, not only for its velocity but for the sheer power he generates with little backswing. His wrister is just as nasty.”

It is fair to consider this pick as somewhat “off the board”. Elite Prospects had him at #214. No other service had him listed at all. One wonders if fellow countryman Leon Draisaitl had and offered any insight on the player to the Oilers draft team? He and his father surely know of every sharp prospect in that nation.

Munzenberger is committed to NCAA University of Vermont in 2022-23 which offers another interesting tidbit. Todd Woodcroft is the coach of that program, the brother of Bakersfield Condors bench boss Jay Woodcroft.  So, there may well be some added insight from that connection.

After a very long day, the Montreal Canadiens final picks are finally upon us, with 214th overall being up first. The Habs acquired this pick after trading out of an earlier round, and with this pick the team selected Joe Vrbetic from OHL’s North Bay Battalion.

Unfortunately like many other prospects in the OHL, Vrbetic was not able to play this year due to the Covid pandemic. In his last full season he posted a 4.23 goals against, an .881 save percentage along with a 14-25-1 record on a dreadful North Bay team that won just 17 out of 62 games.

The Habs have the penultimate pick in the draft at 223rd overall this year coming up.

Tokyo Olympics: Michael Woods was milliseconds away from podium finish in thrilling road race – The Globe and Mail

Get the Olympic highlights in your inbox every day with our newsletter, or follow @globeandmail on Twitter for breaking news.

Situation in Tokyo, by numbers

WHAT IS THE OLYMPIC MEDAL TALLY IN TOKYO SO FAR?

So far, China has the most gold medals, two, followed by Japan, Korea, Thailand, Iran, Ecuador, Kosovo, Italy with one gold each. Canada has no medals yet.

WHAT TIME IS IT IN TOKYO RIGHT NOW?

Opinion: At the Tokyo Olympics, Michael Woods was a hair’s breadth away from being the stuff of national lore

Michael Woods came milliseconds away from the podium during the men’s road race, and milliseconds away from forever capturing the hearts and minds of Canadians. Despite the near miss, Woods’ performance was captivating. Columnist Cathal Kelly writes, “When he is up in the saddle and headed to vertical, Woods is something to watch. He’s like a piston with arms.”

The Canadian women’s swimming team won big at the 2016 Rio Olympic Games, bringing home six medals. They surprised Canada, the world, and even themselves. Fast forward to today’s Tokyo Olympic Games, and Canada wants them to do it all over again. At the centre of the team is Penny Oleksiak, who spearheaded Rio’s medal captures despite being just 16 at the time. She arrives in Tokyo with massive expectations on her shoulders.

Nathan VanderKlippe, currently reporting from Tokyo, shares musings about the geopolitics present at the Olympic Games. The International Olympic Committee does not allow Taiwan – a self-governed nation – to compete under its own name, instead appearing as Chinese Taipei under a special flag. Online streaming service Tencent interrupted its coverage of the opening ceremony to ensure Chinese viewers didn’t have to see the Taiwanese athletes participate in the parade.

Check the full Olympic schedule for the latest event times and competitors.

What athletes and teams should Canadians look out for? Consult our guide.

How did Canada’s swimmers use data to get stronger? Grant Robertson explains.

NB businesses ponder how to proceed once pandemic restrictions are removed – CBC.ca