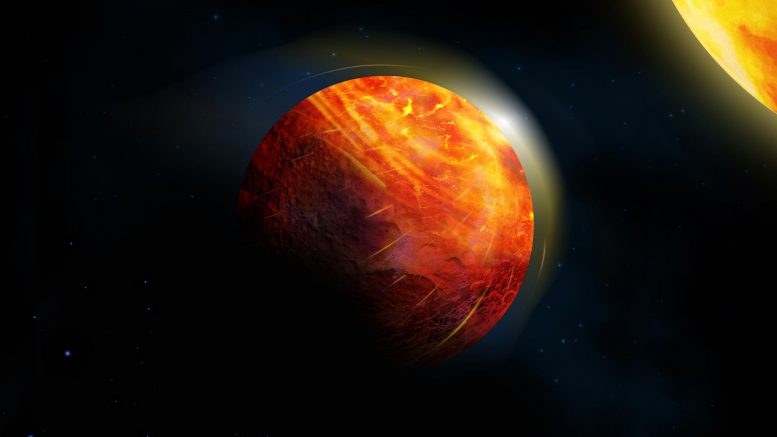 At the center of the large illuminated region there is an ocean of molten rock overlain by an atmosphere of rock vapor. Supersonic winds blow towards the frigid and airless nightside, condensing into rock rain and snow, which sluggishly flow back to the hottest region of the magma ocean. Credit: Julie Roussy, McGill Graphic Design and Getty Images

‘Rocky’ weather could change the surface and atmosphere over time on exoplanet K2-141b.

Among the most extreme planets discovered beyond the edges of our solar system are lava planets: fiery hot worlds that circle so close to their host star that some regions are likely oceans of molten lava. According to scientists from McGill University, York University, and the Indian Institute of Science Education, the atmosphere and weather cycle of at least one such exoplanet is even stranger, featuring the evaporation and precipitation of rocks, supersonic winds that rage over 5000 km/hr, and a magma ocean 100 km deep.

In a study published in Monthly Notices of the Royal Astronomical Society, the scientists use computer simulations to predict the conditions on K2-141b, an Earth-size exoplanet with a surface, ocean, and atmosphere all made up of the same ingredients: rocks. The extreme weather forecasted by their analysis could permanently change the surface and atmosphere of K2-141b over time.

“The study is the first to make predictions about weather conditions on K2-141b that can be detected from hundreds of light years away with next-generation telescopes such as the James Webb Space Telescope,” says lead author Giang Nguyen, a PhD student at York University who worked under the supervision of McGill University Professor Nicolas Cowan on the study.

In analyzing the illumination pattern of the exoplanet, the team discovered that about two-thirds of K2-141b faces perpetual daylight — rather than the illuminated hemisphere we are used to on Earth. K2-141b belongs to a subset of rocky planets that orbit very close to their star. This proximity keeps the exoplanet gravitationally locked in place, meaning the same side always faces the star.

The night side experiences frigid temperatures of below -200 C. The day side of the exoplanet, at an estimated 3000 C, is hot enough to not only melt rocks but vaporize them as well, ultimately creating a thin atmosphere in some areas. “Our finding likely means that the atmosphere extends a little beyond the shore of the magma ocean, making it easier to spot with space telescopes,” says Nicolas Cowan, a professor in the Department of Earth & Planetary Sciences at McGill University.

Remarkably, the rock vapor atmosphere created by the extreme heat undergoes precipitation. Just like the water cycle on Earth, where water evaporates, rises into the atmosphere, condenses, and falls back as rain, so too does the sodium, silicon monoxide, and silicon dioxide on K2-141b. On Earth, rain flows back into the oceans, where it will once more evaporate and the water cycle is repeated. On K2-141b, the mineral vapor formed by evaporated rock is swept to the frigid night side by supersonic winds and rocks “rain” back down into a magma ocean. The resulting currents flow back to the hot day side of the exoplanet, where rock evaporates once more.

Still, the cycle on K2-141b is not as stable as the one on Earth, say the scientists. The return flow of the magma ocean to the day side is slow, and as a result they predict that the mineral composition will change over time — eventually changing the very surface and atmosphere of K2-141b.

“All rocky planets­, including Earth, started off as molten worlds but then rapidly cooled and solidified. Lava planets give us a rare glimpse at this stage of planetary evolution,” says Professor Cowan of the Department of Earth and Planetary Sciences.

The next step will be to test if these predictions are correct, say the scientists. The team now has data from the Spitzer Space Telescope that should give them a first glimpse at the day-side and night-side temperatures of the exoplanet. With the James Webb Space Telescope launching in 2021, they will also be able to verify whether the atmosphere behaves as predicted.

After an antenna repair on Earth, NASA is now able to command Voyager 2 again – CTV News 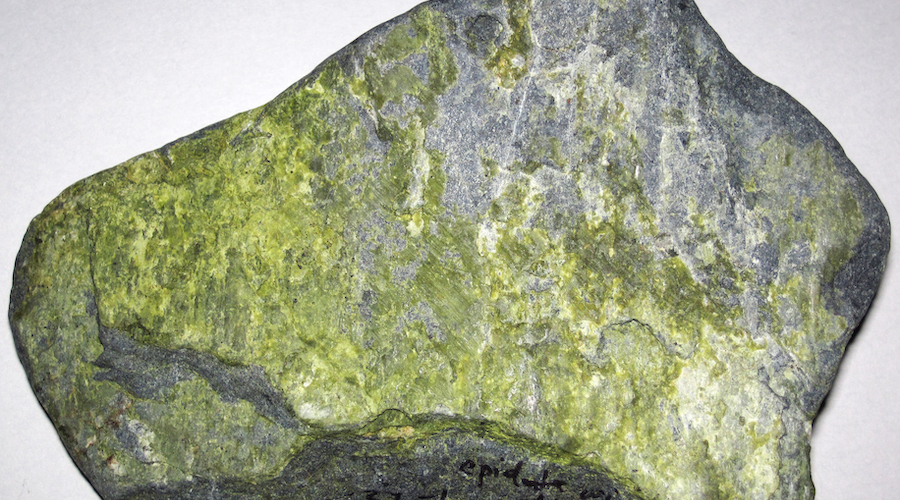 Nucleation and growth together are known as precipitation — and their sum has been used to predict iron hydroxide’s formation behaviour. But these predictions have largely omitted separate consideration of nucleation.

In Jun’s view, this means that previous results were not accurate enough.

“Our work provides an empirical, quantitative description of nucleation, not a computation, so we can provide scientific evidence about this missing link,” the researcher said.

By using X-rays and a novel experimental cell she developed to study environmentally relevant complex systems with plenty of water, ions and substrate material, Jun was able to observe nucleation in real-time.

The work consisted of employing an X-ray scattering technique called “grazing-incidence small-angle X-ray scattering.” By shining X-rays onto a substrate with a very shallow angle, close to the critical angle that allows total reflection of light, this technique can detect the first appearance of nanometer size particles on a surface.

The empirical measuring of the initial point of nucleation revealed that the general estimates scientists have been using overstate the amount of energy needed for this process.

According to the scientist, her findings can help better understand processes related to water quality at acid mine drainage sites, the reduction of membrane fouling and pipeline scale formation, and the developing of more environmentally friendly superconductor materials. 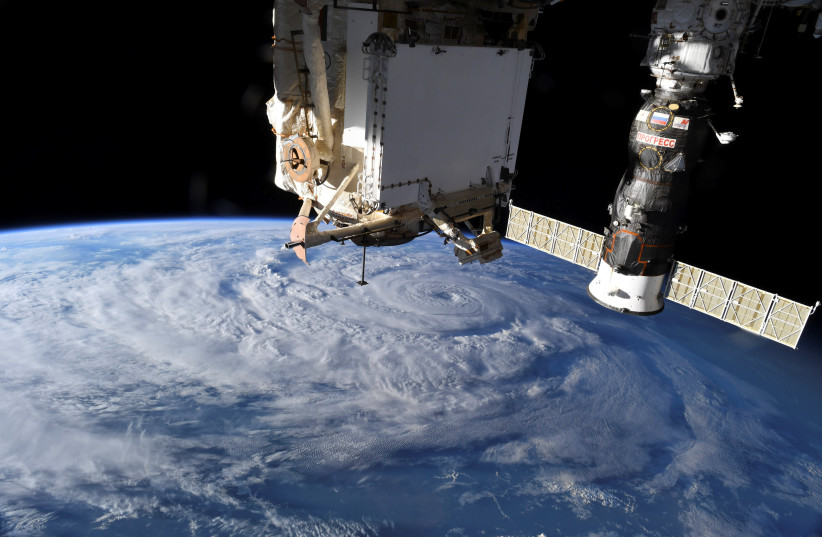 In 2019, US President Donald Trump declared that “space is the new war-fighting domain.” This followed the creation of the US Space Force and a commitment to “American dominance” in outer space.Other space-faring nations, and those who fear the acceleration of an arms race in space, were greatly concerned. At the latest meeting of the United Nations Committee on the Peaceful Uses of Outer Space, states noted with alarm that “preventing conflicts in outer space and preserving outer space for peaceful purposes” is more necessary than ever.The presumed election of Joe Biden as the next US president and Kamala Harris as vice-president suggests there is cause for hope. The future of space may look more like the recent launch of NASA’s SpaceX Crew-1 mission to the International Space Station.Onboard were US and Japanese astronauts, who joined Russian and US crews already living aboard the ISS. As the Falcon 9 rocket soared into space, the collaborative, cooperative and commercial nature of space was once again clear for all to see.The incoming Biden-Harris administration appears more interested in international cooperation, and much more cognizant of the challenges of climate change, pandemics and other global issues. A carefully calibrated space policy can do much to address “terrestrial” challenges, while still allowing for many positive space activities.Since 1967, human activity in space has been guided by the widely accepted principles embedded in the Outer Space Treaty. Ratified or signed by more than 130 countries, it has ensured we have had no military conflict in space, and requires the exploration and use of space “for the benefit and in the interests of all countries.”Any alternative vision of the future of space is dreadful to consider. Rhetoric about the inevitability of “war in space” makes such conflict more likely and risks a “tragedy of the commons” in space.Any space war would have no clear winner. In a complex, globally shared arena such as space, it is important that states abide by accepted rules and established practices.The US has great scientific and technological advantages and a robust and competitive commercial space sector. Instead of seeking dominance, it can better serve the world (and itself) by focusing its leadership on harnessing space for the benefit of all humankind.In a promising sign, Biden and Harris’s NASA review team is composed of an outstanding group of space scientists as well as a former astronaut.The current administration re-established the National Space Council, which is chaired by the vice president, and this has reinvigorated American investment and leadership in space exploration. This includes an ambitious plan to return to the Moon under the terms of the Artemis Accords.To ensure that the fragile and shared domain of outer space does not become an arena for conflict, the rules that apply to any military uses of space need to be understood, respected and further developed. Failure to do so could lead to devastation, disruption and impact on civilian lives, particularly in the largest and most powerful countries like the US, whose economies and societies are heavily dependent on space infrastructure. Their access to space has given them the greatest competitive advantage, but they are therefore the most vulnerable if that access is compromised.Space is a “congested, contested and competitive” area where scientific, commercial and economic interests converge, as well as military and national security concerns. In this sense, space is like the radio frequency spectrum, which has been successfully regulated and managed for decades under international rules adopted through the International Telecommunication Union.But space is also much more. As the recent Crew-1 mission demonstrated, there are significant benefits when nations come together and cooperate. Enlightened leadership, guided by commonly agreed laws and practices – and a recognition that we share outer space as custodians for future generations – is the only realistic way forward.