The deputy governor of the Bank of Canada acknowledged Thursday the institution has been unable to keep inflation at its target rate and should be “held accountable.”

Paul Beaudry made the remarks in response to Conservative leadership candidate Pierre Poilievre’s claim last month that Bank of Canada governor Tiff Macklem was “surrendering his independence” to Prime Minister Justin Trudeau through a “money-printing” quantitative easing program in response to the pandemic-driven economic crisis.

During the party’s official English-language debate in Edmonton, Poilievre also said he would fire Macklem if he becomes prime minister.

Beaudry was asked by reporters Thursday to respond to those remarks.

“The aspect that we should be held accountable is exactly right,” Beaudry told a news conference.

He did not engage directly with the question of whether Macklem’s job ought to be on the line. He said the Bank is not in the business of politics and prefers to remain in the background.

Beaudry did, however, acknowledge the impact high inflation is having on many Canadians.

“Right now we completely understand that lots of Canadians can be frustrated at the situation,” he said. “It’s difficult for a lot of people. And we haven’t managed to keep inflation at our target, so it’s appropriate people are asking us questions.”

The Bank’s goal is to keep inflation at 2 per cent. Currently it’s closer to 7 per cent.

And while Poilievre has blamed the Bank’s decisions for inflation, Beaudry said the most significant influences on inflation are international — supply chain bottlenecks emerging as the global economy recovers from the pandemic, the war in Ukraine driving up prices for oil, wheat and fertilizer.

Because Canada can’t control the prices of most internationally traded goods, dealing with these forces is tricky, Beaudry said.

Inflation has been blowing past projections: Beaudry

Beaudry said the Bank is trying to explain to Canadians how it got into the current situation — which aspects it got right and got wrong. He said that also involves describing what the Bank is learning from this period and how it plans to control inflation going forward.

He laid out some of those errors in a speech to the Gatineau Chamber of Commerce in Gatineau, Que. on Thursday. He noted that inflation hasn’t just been higher than the Bank’s targets over the past year — it has consistently exceeded its predictions.

He promised that when the Bank updates inflation projections in July, it will provide an initial analysis of the inflation forecast errors.

Beaudry also predicted that inflation is likely to rise even higher in the short term before it begins to ease.

Speaking to reporters, Beaudry also explained some of the challenges the Bank faces in making decisions during a time of volatile global conditions.

While he acknowledged the Bank struggled to predict price increases for oil and food and didn’t perceive how supply chain issues could also lead to price changes, he said such errors are commonplace among those trying to anticipate inflation.

“We think we’ve taken the best type of decisions for Canadians at each point for the information we had,” he said.

“We have to figure out ways of bringing things back down to that two per cent,” he said. “We’re on it.”

Poilievre’s comments about the Bank of Canada have come under fire. His critics have warned that threats directed at the Bank of Canada undermine trust in the institution and, by extension, the economy. In response, Poilievre has claimed that he’s just rattling “the elites.”

Leadership rival Jean Charest attacked Poilievre over his comments about the Bank during the party’s official English language debate in May, calling them “irresponsible.”

“It creates doubt. If you’re an investor looking at coming to Canada and you hear that kind of a statement coming from a member of the House of Commons, you’d think you were in a Third World country,” he said.

Jean Charest says Pierre Poilievre’s claims that the Bank of Canada Governor should be held responsible for inflation rates and subsequently fired is an “irresponsible” claim for a candidate vying for leadership of the Conservative Party to make.

“We cannot afford to have any leader that goes out there and deliberately undermines the confidence in institutions. Conservatives do not do that.”

Los Angeles, United States of America (USA)- Fighthype.com has reported that Conor McGregor and Floyd Mayweather are in discussions over holding a second bout.

The UFC superstar posted a cryptic post hinting at a second bout by sharing a picture of their 2017 clash and writing, “I accept.”

However, it’s uncertain as to whether a rematch between the pair would be another exhibition bout, or whether Mayweather would make it one more professional fight.

Meanwhile, YouTuber, Jake Paul, has repeatedly claimed that Mayweather still hasn’t paid him following last year’s exhibition bout. Their eight-round exhibition bout went to a draw as Mayweather was unable to knockout Paul, “Floyd Mayweather is broke. I have been saying it all the time. I think he probably spent it on the girls he pays to be around him. He’s hard to hit, but even harder to collect money from. Who should I fight next?”

However, Mayweather has since dismissed the accusations claiming that Paul has suggested that the pair should have a second exhibition bout.

Mayweather was expected to earn US$64 million from the fight, with Logan receiving US$18.5 million of the purse. 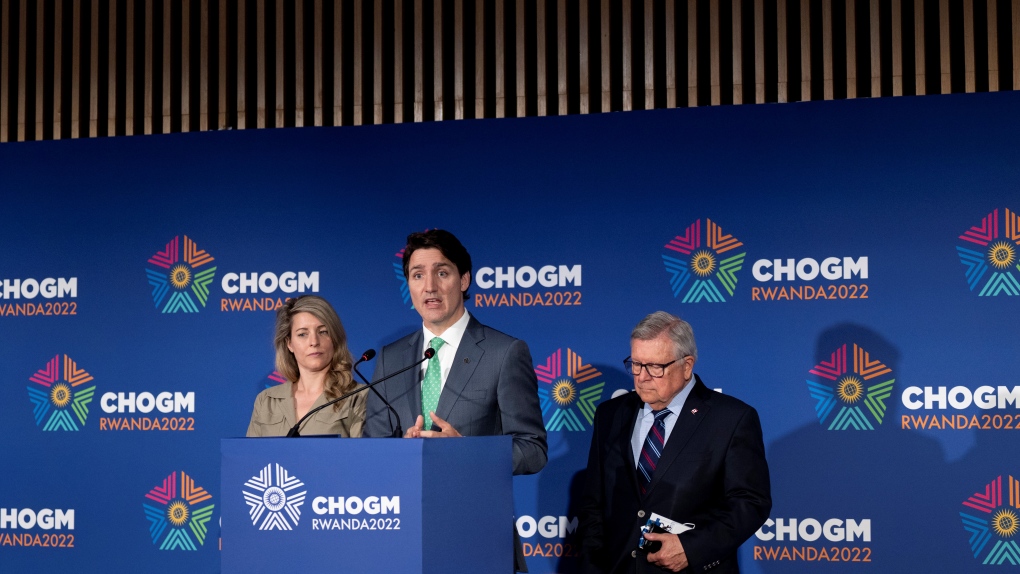 Prime Minister Justin Trudeau headed to the G7 summit in Germany on Saturday without a consensus from the Commonwealth to condemn the Russian invasion of Ukraine, but with a chorus of countries calling for help to overcome the fallout of the war.

Trudeau and Foreign Affairs Minister Melanie Joly arrived in Kigali, the capital of Rwanda, on Wednesday for the Commonwealth Heads of Government meeting, which has been dominated by the concerns of nations that are suffering from food scarcity. Trudeau departed for the G7 talk slater in the day.

In the final communique from the Commonwealth summit, the 54 participating countries said they discussed the conflict in Ukraine, ” underscored the need to respect the territorial integrity and sovereignty of all states,” and ” emphasized that all countries must seek peaceful resolution to all disputes in accordance with international law.”

The countries stopped short of condemning Russia, as Trudeau and United Kingdom Prime Minister Boris Johnson have done throughout the summit.

“I can assure you that the topic of standing up for Ukraine was much discussed,” Trudeau said at a press conference following the conclusion of the summit, referencing “strong language” in the communique.

Most Commonwealth Nations condemned Russia’s actions at a United Nations vote in March, but 10 abstained. Among them was India, whose Prime Minister Narendra Modi opted not to attend the Commonwealth summit and instead spoke virtually with the leaders of Russia, China, Brazil and South Africa.

Trudeau said Russian President Vladimir Putin has run a disinformation campaign and has even been “telling outright lies,” including blaming the food security crisis on Western sanctions against Russia.

He said food shortage stems from Russia’s illegal actions, including blockade at key ports, as well as the deliberate targeting of Ukrainian grain storage facilities through cruise missile strikes.

“I was very clear with our friends and partners around the table, and not just clear on Russia’s responsibility, but on how Canada and the West are stepping up,” Trudeau said.

Canada will be raising the growing threat of famine at the G7 in Schloss Elmau Germany, Joly said.

She said Canada was in “listening mode” at the Commonwealth meetings, where leaders of smaller nations were able to speak without the dominating presence of the United States, Russia and China.

“What is clear to us is that Russia is weaponizing food and putting a toll on many countries around the world, and putting 50 million lives at risk,” Joly told reporters Friday in Rwanda.

Trudeau had attempted to meet with the chair of the African Union Commission, Moussa Faki Mahamat, for several days during the Commonwealth summit but the sit-down was repeatedly postponed and eventually cancelled.

Shortly after Trudeau arrived in Rwanda, the government announced Canada would dedicate a new ambassador to the African Union, which has suffered from the food shortages inflicted on the continent as a result of the warin Ukraine.

Both Ukraine President Volodymyr Zelenskyy and Putin have met with representatives of the African Union, with Russia blaming sanctions against its government for stopping the flow of grain.

At the conclusion of the Commonwealth summit, Trudeau announced $94 million in funding for various education initiatives and $120 million to support gender equality and women’s rights in Commonwealth countries.

Some of the other voices the prime minister has promised to centre at his international meetings, including the G7 summit,

belong to youth leaders who spoke at a Saturday-morning event focused on issues facing young people around the world.

Some of the delegates spoke about the devastating effects of climate change, particularly around remote island nations where infrastructure cannot withstand natural disasters and rebuilding efforts take years. The onslaught takes a toll on education and health services, one delegate told the forum.

The federal government has created a special task force to help tackle the major delays with immigration applications and passport processing that have left Canadians frustrated.

In a statement announcing the new task force, Prime Minister Justin Trudeau said the federal government knows the delays are unacceptable, and will continue to do everything it can to improve the delivery of the services in an efficient and timely manner.

Trudeau said the new task force will help guide the government to better meet the changing needs of Canadians, and continue to provide them with the high-quality services they need and deserve.

Ten cabinet members will spearhead the new committee, which will review how services are delivered, and identify gaps and areas for improvement.

The committee will be expected to make recommendations outlining short- and longer-term solutions that would reduce wait times, clear out backlogs, and improve the overall quality of services provided.

In addition, the task force will monitor external issues, such as labour shortages around the world, which contribute to travel delays at home and abroad.