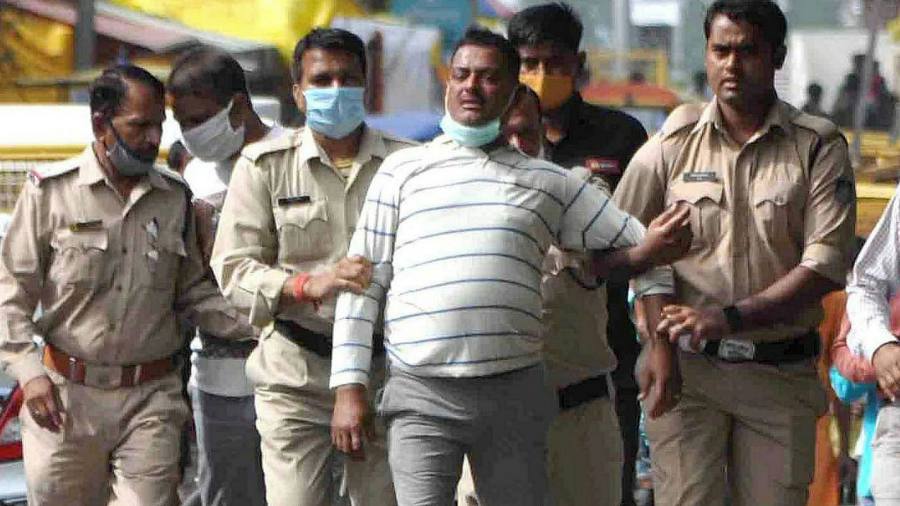 Time had run out for Vikas Dubey, an Indian gangster whose sway over a swath of villages on the periphery of Kanpur, a declining industrial town, had long made him an appealing ally for local politicians in the populous northern state of Uttar Pradesh.

The potbellied underworld don first gained notoriety in 2001, accused of gunning down a state government minister inside a crowded police station. He was acquitted at trial, as none of the many police officers in the station at the time of the murder testified against him.

In the following years, Dubey’s ability to deliver Brahmin voters in his stronghold ensured he was shielded from prosecution for a lengthening list of criminal cases, including multiple murder allegations. He was agnostic on party affiliation, blowing with prevailing political winds.

The precise cause of his fall from grace remains murky. But in early July, a police team went on a midnight raid of his home to arrest him for attempted murder. Tipped off by moles, Dubey was ready. In a gory shootout, Dubey and his henchmen killed eight officers, then slipped away.

This saga may seem preposterous — like a script for a Hollywood or Bollywood potboiler. But what is most extraordinary about the tale is just how banal it is in India, where powerful, thuggish criminals are a cornerstone of grassroots politics.

“There is a Vikas Dubey in probably every district across India,” says Milan Vaishnav, author of When Crime Pays: Money and Muscle in Indian Politics. “The nexus between politicians, criminals and police is like an iron triangle.”

Gilles Verniers, a political-science professor at Ashoka University, called Dubey “the prototype of the kind of local muscle that political parties hire or recruit to mobilise votes or conduct their business”. Such figures often meet grim ends once they fall from favour or outlive their usefulness. By then “the incentives of doing away with them are quite high”, he says. “They are repositories of great knowledge about the dirty dealings of parties and politicians.”

The denouement of Dubey’s story followed the prescribed script. After his escape, he was on the run for nearly a week, until he was finally captured at a Hindu temple in a small town in the state of Madhya Pradesh. Some believe his arrest was staged and he had deliberately surrendered in a state where an old political contact is in the government.

That night, he was handed to the Uttar Pradesh police, who were supposed to drive him back to Kanpur to face justice. But, as had been widely predicted on social media, he never made it. Just outside his stronghold, the police shot three bullets into Dubey’s chest.

Police claimed afterwards that Dubey had attempted to grab a firearm and escape their custody after their car overturned when a driver swerved to avoid a herd of cattle. Authorities did not explain why such a dangerous man would not have been handcuffed for the journey.

Few Indians believe this convoluted account of his death, which came a day after another of his henchmen was killed in transit in similar circumstances. In that case, the police vehicle transporting the slain suspect had allegedly developed a flat tire. To most, the tale of Dubey’s attempted escape was a barely plausible figleaf for a deliberate and premeditated killing, either as an act of vengeance or to silence him, and ensure he could not spill the secrets of his erstwhile political patrons.

Dubey is said to be the 119th criminal suspect gunned down by Uttar Pradesh police since 2017, when controversial Hindu cleric Yogi Adityanath took charge as the state’s chief minister. The fiery leader has projected himself as a strongman willing to do what it takes to end lawlessness and impunity — even if it means transgressing democratic norms.

Last year, his administration even touted the rising number of extrajudicial killings — known in local parlance as “encounter killings” — as one of its big achievements, proof of its ability to “bring justice by any means necessary”.

But the Dubey saga is a powerful reminder that in India, law and order may not always go hand in hand.

U.S., UK, Germany clash with China at U.N. over Xinjiang

The United States, Germany and Britain clashed with China at the United Nations on Wednesday over the treatment of Uyghur Muslims in Xinjiang, angering Beijing by hosting a virtual event that China had lobbied U.N. member states to stay away from.

“We will keep standing up and speaking out until China’s government stops its crimes against humanity and the genocide of Uyghurs and other minorities in Xinjiang,” U.S. Ambassador to the U.N. Linda Thomas-Greenfield told the event, which organizers said was attended by about 50 countries.

Western states and rights groups accuse Xinjiang authorities of detaining and torturing Uyghurs and other minorities in camps. Beijing denies the accusations and describes the camps as vocational training facilities to combat religious extremism.

“In Xinjiang, people are being tortured. Women are being forcibly sterilized,” Thomas-Greenfield said.

In a note to U.N. member states last week, China’s U.N. mission rejected the accusations as “lies and false allegations” and accused the organizers of being “obsessed with provoking confrontation with China.”

While China urged countries “NOT to participate in this anti-China event,” a Chinese diplomat addressed the event.

“China has nothing to hide on Xinjiang. Xinjiang is always open,” said Chinese diplomat Guo Jiakun. “We welcome everyone to visit Xinjiang, but we oppose any kind of investigation based on lies and with the presumption of guilt.”

The event was organized by Germany, the United States and Britain and co-sponsored by Canada, Australia, New Zealand and several other European nations. Germany’s U.N. Ambassador Christoph Heusgen said countries who sponsored the event faced “massive Chinese threats,” but did not elaborate.

British U.N. Ambassador Barbara Woodward described the situation in Xinjiang as “one of the worst human rights crises of our time,” adding: “The evidence … points to a program of repression of specific ethnic groups.”

“I’m sure she’s busy. You know we all are. But I have a similar global mandate to defend human rights and I couldn’t think of anything more important to do than to join you here today,” Roth told the event.

Ravina Shamdasani, deputy spokesperson for the U.N. Human Rights office, said Bachelet – who has expressed serious concerns about the human rights situation in Xinjiang and is seeking access – was unable to participate.

“The High Commissioner continues to engage with the Chinese authorities on the modalities for such a visit,” she said, adding that Bachelet’s office “continues to gather and analyze relevant information and follow the situation closely.”

Former Canadian Finance Minister Bill Morneau breached conflict-of-interest rules by not recusing himself when the government awarded a contract to a charity he had close ties to, independent ethics commissioner Mario Dion said on Thursday.

In a parallel probe, Prime Minister Justin Trudeau was cleared of having broken any ethics rules when WE Charity was tapped to run a C$900 million ($740.9 million) program to help students find work during the COVID-19 pandemic last year.

The charity later walked away from the contract.

Trudeau and Morneau both apologized last year for not recusing themselves during Cabinet discussions involving WE.

Trudeau’s wife, brother and mother had been paid to speak at WE Charity events in previous years, but Dion said this appearance of a conflict of interest was not “real”.

Morneau, on the other hand, was a friend of Craig Kielburger, one of the charity’s founders, Dion said. The charity had “unfettered access” to the minister’s office that “amounted to preferential treatment”, a statement said.

No fines or penalties were levied.

Morneau said on Twitter he should have recused himself. Trudeau said in a statement issued by his office that the decision “confirms what I have been saying from the beginning” that there was no conflict of interest.

Ahead of a possible federal election later this year, the opposition could use the ruling to underscore the government’s uneven track record on ethics. Trudeau has been twice been found in breach of ethics rules in the past.

In August 2019, he was found to have broken rules by trying to influence a corporate legal case, and in December 2017, the previous ethics commissioner said Trudeau had acted wrongly by accepting a vacation on the Aga Khan’s private island.

In a statement, opposition Conservative Party leader Erin O’Toole said: “To clean up Ottawa, Conservatives will impose higher penalties for individuals who break the Conflict of Interest Act and shine a light on Liberal cover-ups and scandals, ending them once and for all.”

The controversy over Morneau’s ties to the charity was a factor in his resignation in August last year, when he also left his parliamentary seat, saying he would not run again. Chrystia Freeland was named to take over for him a day later.

EU prepares new round of Belarus sanctions from June

The European Union is readying a fourth round of sanctions against senior Belarus officials in response to last year’s contested presidential election and could target as many as 50 people from June, four diplomats said.

Along with the United States, Britain and Canada, the EU has already imposed asset freezes and travel bans on almost 90 officials, including President Alexander Lukashenko, following an August election which opponents and the West say was rigged.

Despite a months-long crackdown on pro-democracy protesters by Lukashenko, the EU’s response has been narrower than during a previous period of sanctions between 2004 and 2015, when more than 200 people were blacklisted.

The crisis has pushed 66-year-old Lukashenko back towards traditional ally Russia, which along with Ukraine and NATO member states Latvia, Lithuania and Poland, borders Belarus.

Some Western diplomats say Moscow regards Belarus as a buffer zone against NATO and has propped up Lukashenko with loans and an offer of military support.

Poland and Lithuania, where opposition leader Sviatlana Tsikhanouskaya fled to after the election she says she won, have led the push for more sanctions amid frustration that the measures imposed so far have had little effect.

“We are working on the next sanctions package, which I hope will be adopted in the coming weeks,” said EU foreign policy chief Josep Borrell, who chaired the meeting.

The EU has sought to promote democracy and develop a market economy in Belarus, but, along with the United States, alleges that Lukashenko has remained in power by holding fraudulent elections, jailing opponents and muzzling the media.

Lukashenko, who along with Russia says the West is meddling in Belarus’ internal affairs, has sought to deflect the condemnation by imposing countersanctions on the EU and banning some EU officials from entering the country.

“The fourth package (of sanctions) is likely to come in groups (of individuals), but it will be a sizeable package,” one EU diplomat told Reuters.

More details were not immediately available.