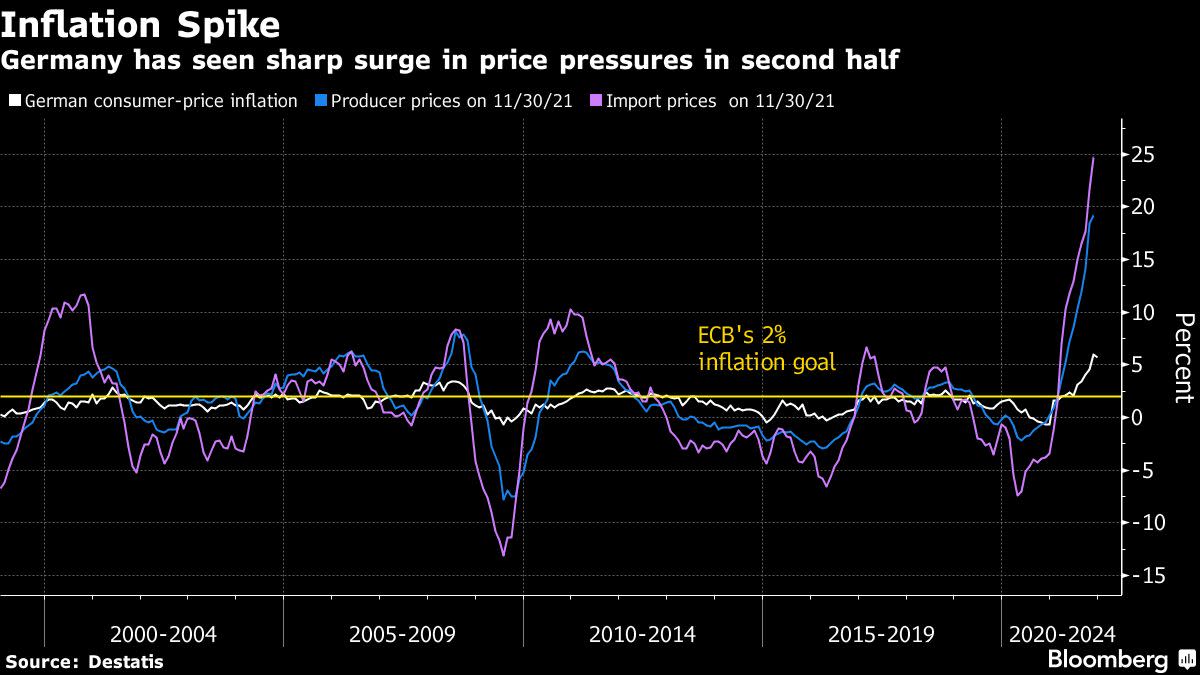 Germany is headed for its second recession of the pandemic after the emergence of the coronavirus’s omicron strain compounded drags on output from supply snarls and the fastest inflation in three decades.

Europe’s largest economy shrank by 0.5% to 1% in the final quarter of 2021, according to an estimate released Friday by the Federal Statistics Office. With new Covid-19 cases at a record and the key manufacturing industry still struggling to source components, Dekabank, NordLB and ABN Amro all predict another contraction this quarter.

For the whole of last year, gross domestic product rose 2.7% — matching estimates but still short of its pre-crisis level. Germany’s recovery trails France, Italy and Spain, which are expected to report 2021 expansions of 4.5% or more later this month.

The size of the year-end slump came as a surprise after the Bundesbank last month signaled only a slight decline was likely. But there’s little sign things will improve soon.

“I don’t have a whole lot of imagination for positive impulses — supply bottlenecks are persisting, the surge in energy prices is only now reaching consumers, and services are weakened by the virus,” said Andreas Scheuerle, an economist at Dekabank who sees output falling 0.8% between January and March.

The spring, however, should mark a resumption in the pandemic rebound.

“Covid shouldn’t play a major role anymore during the summer — energy prices should have been digested and supply-chain problems may have eased by then,” Scheuerle said. “So in the second and third quarters, we should see solid growth.”

The Bundesbank expects “significant momentum” from the spring onward, predicting full-year expansion of 4.2%. Bloomberg Economics expects output to bounce back already in the first quarter — by at least 0.7% — as infections drop.

A large share of Germany’s struggles is rooted in its outsized reliance on manufacturing — a boon during previous crises that turned into a liability as inputs became harder to find. Carmakers are suffering the most, with almost a fifth of employees in the industry furloughed in December.

Volkswagen AG reported 2021 sales declined to the lowest in a decade and warned chip supply will remain tight in the first half.

“Moving into 2022, the economic situation doesn’t seem to have improved,” said Aline Schuiling, senior economist at ABN Amro. “It won’t take much to slip into recession, though if fears of omicron wane during the first quarter, the decline in output could turn out to be slightly less than at the end of last year.”

More stringent rules on vaccination may ease some pressure on the economy. Chancellor Olaf Scholz reaffirmed his support on Wednesday for making shots compulsory for all adults, while Volkswagen stepped up its own vaccination push.

But inflation is an obstacle. Natural gas prices in Europe jumped to the highest level in a week on Friday amid tensions over Ukraine, suggesting consumer energy costs — already rising at an annual pace of just under 20% — could increase further.

While the government is considering aid for households struggling to pay surging bills and excess savings accrued during lockdowns may cushion some of the blow, shop owners are worried.

Nearly 80% of non-food retailers surveyed by industry group HDE were unhappy with end-of-year sales, which were also hurt by rules banning unvaccinated customers who hadn’t recovered from the virus.

UK economy finally bigger than before pandemic in November

The Canadian dollar strengthened against the greenback on Thursday as U.S. bond yields stabilized and Ontario, Canada’s most populous province, said it would soon ease restrictions to curb the spread of the Omicron coronavirus variant.

Among G10 currencies, only the Australian dollar notched a bigger gain. Both Canada and Australia are major producers of commodities.

Ontario has blunted transmission of the Omicron variant and it will gradually ease restrictions on businesses from end-January, Premier Doug Ford said.

Despite the prospect of slower economic growth due to restrictions, investors have raised bets that the Bank of Canada will hike interest rates on Jan. 26. It would be the first hike since October 2018.

Canadian retail sales data, due on Friday, could offer more clues on the strength of the domestic economy.

The price of oil, one of Canada’s major exports, settled 0.1% lower at $86.90 a barrel as U.S. crude inventories rose for the first time in eight weeks and investors took profits after a recent rally.

Canadian government bond yields were mixed across a flatter curve. The 10-year eased 2.4 basis points to 1.857%, after touching on Wednesday its highest intraday level since March 2019 at 1.905%.

Canada’s main stock index on Thursday fell to its lowest level in more than two weeks as worries about the inflation outlook and prospects for higher interest rates weighed on investor sentiment.

Data on Wednesday showed that Canadian inflation climbed in December to a 30-year high.

Investors have raised bets on the Bank of Canada hiking interest rates at a policy announcement next week and are also concerned the Federal Reserve could become aggressive in controlling inflation.

The TSX gained 22% in 2021, its best yearly performance since 2009, supported by massive stimulus, vaccine rollouts and hopes of global economic recovery.

“The markets are deciding that the last few years people have made way too much money and it is time to give some of that back,” Schwartz said.

Broad-based gains included a 2.2% decline for consumer discretionary shares, while the basic materials group, which includes precious and base metals miners and fertilizer companies, ended 1.8% lower.

Energy was down 0.7% as an uptick in U.S. crude inventories arrested the recent move higher in oil prices. U.S. crude oil futures settled 0.1% lower at $86.90 a barrel.

Among 11 major sectors, utilities was the only one to end higher, gaining 0.2%.

WASHINGTON — Any sanctions imposed on Russia over its aggression toward Ukraine would not particularly expose the U.S. economy, although the Biden administration is focused on any possible impact on oil, White House National Economic Council Director Brian Deese said on Thursday.

“The actions that we have ready and that we are working closely with our allies to deploy would impose very significant costs across time on the Russian economy, and it would do so in a way that mitigates the impact on the global economy and the American economy,” he told CNN. (Reporting by Susan Heavey Editing by Raissa Kasolowsky)