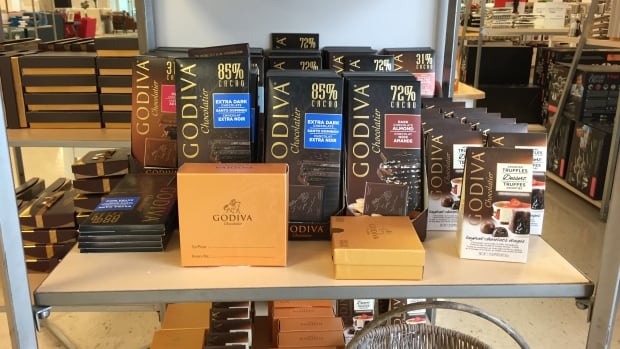 COVID-19 has been far from sweet for Godiva, which has decided to sell or close its stores across North America.

The luxury chocolatier says 128 brick and mortar locations, including 11 in Canada, will shut by the end of March.

The chain has 4 locations in Toronto, one in nearby Mississauga, and two in Ottawa. It also has two in the Vancouver area, one in Winnipeg, and one near Montreal.

The company declined to say how many jobs will be affected by the decision.

Godiva will maintain retail operations across Europe, the Middle East and China.

The closures mark a reversal from its strategy announced in 2019 to open 2,000 cafe locations worldwide, including more than 400 in North America.

It says a key part of its moves has been to focus on retail food and pharmacy locations as well as online.

It noted that in-person shopping at its own stores has waned because of the pandemic and changes in consumer shopping behaviour.

“Godiva is already available in many retailers in North America and we will continue to increase our presence there while always upholding the premium quality, taste, and innovation that we have been renowned for since we were founded in Brussels in 1926,” stated CEO Nurtac Afridi.

(Reuters) – National Bank of Canada beat analysts’ estimates for first-quarter profit on Wednesday, as it set aside less capital to cover its loan losses and as earnings from its financial markets unit surpassed pre-pandemic levels.

Next GameStop (NYSE:GME)? Why 2021 Is the Year for BlackBerry (TSX:BB) – The Motley Fool Canada

I tend to solidify whether financial news is truly a big deal by one thing: my husband. If he starts asking about something in the stock market, I know it’s a really big deal. That’s what happened when the historic rise of GameStop (NYSE:GME) flooded the airwaves.

While GameStop is no longer heading up headlines, I still think there is something to be learned from the meteoric rise and enormous fall of the company. In fact, it may not be the last time we see such a short squeeze from the likes of GameStop stock. In fact, this could be the year that we see many companies have such movement as the pandemic (hopefully) comes to a conclusion.

When I talk about bets, I want to be clear: I don’t mean you should start looking for the next short squeeze. That is a very dangerous game. In fact, the reason it’s called a short squeeze is because short sellers who bet the stock would lose money were forced to buy the stock just so they wouldn’t see their losses increase even further — not the best investment strategy, especially when the stock collapsed almost immediately after.

So when you place your bets on a stock, it should be as a long-term hold. It’s not really betting at all, frankly. You’re investing in a company’s fundamentals, believing it has the strength to go the distance. That’s why it’s a great time to get behind a company like BlackBerry Ltd. (TSX:BB)(NYSE:BB).

But here’s the great news. There could be yet another BlackBerry frenzy like we saw at the beginning of the year. Even one similar to GameStop stock. Why? Let’s dive in.

You might not consider BlackBerry stock as a solid post-COVID recovery play. However, the company’s recent movement comes largely from the announcement by the United States President Joe Biden that electric vehicles (EV) – and other green energy initiatives – will see massive investment worth billions of dollars.

Even better, President Biden stated he would be changing 650,000 federal vehicles into EVs. This announcement is just further fuel to the fire that is the EV industry — an industry that will see massive influence in BlackBerry stock. Several motor companies have announced plans to have a full-fleet of EVs and plug-in hybrids by 2030. The entire industry could be worth $1 trillion by that point, according to estimates!

And what company will many of these companies use for their in-car software? BlackBerry. The company even partnered with Amazon Web Services to improve its IVY platform, and make cloud-based data safer and more user friendly. With Apple and Google also potentially entering the car industry, BlackBerry stock could rise as its QNX software remains at the forefront of autonomous vehicle use.

So what does this have to do with a COVID recovery? Right now, motor companies remain stalled on the production line. The red tape that has to be crossed to see cars safely out the door is stringent. But as these walls slowly come down, companies should be able to ramp up production, which means a higher demand for BlackBerry’s software.

So really, even though there was a recent boost in share price, the company’s future growth prospects leave plenty of room to grow. BlackBerry stock could shoot up as it partners with even more household-name organizations. Investors may even see the triple-digit prices we saw two decades ago, leaving today’s share price of about $13 as of writing a steal of a deal.

Speaking of upside, here is another list of HIGH GROWTH options to consider before buying a risky stock in bulk.

Before you consider Air Canada, you may want to hear this.

Motley Fool Canadian Chief Investment Advisor, Iain Butler, and his Stock Advisor Canada team just revealed what they believe are the 10 best stocks for investors to buy right now… and Air Canada wasn’t one of them.

The online investing service they’ve run since 2013, Motley Fool Stock Advisor Canada, has beaten the stock market by over 3X. And right now, they think there are 10 stocks that are better buys.

“Rural Nova Scotia is really experiencing an affordable housing crisis,” she told members of the Standing Committee on Natural Resources and Economic Development.

Lanthier is a member of the South Shore Housing Action Coalition. The coalition includes representation from six municipal councils, as well as local women’s shelters and individuals interested in housing issues.

She said although “more than 65 per cent of Nova Scotians live in rural communities,” there is a growing concern that housing programs, projects and services aimed at those most at risk of becoming homeless are more centralized in Halifax.

Lanthier told the committee that rural homelessness is often not as visible as it is in the city, nor as well documented.

“But because it is hidden and not easily measured doesn’t mean that it doesn’t exist,” she said.

Martin Laycock, a senior official in the just renamed Department of Infrastructure and Housing, outlined what the province has pledged to do.

That includes “spending $7.5 million to support the creation of 156 new affordable housing units [and] an additional $2 million to help even more low-income Nova Scotians keep their home safe or make adaptation.”

Nova Scotia and Ottawa have pledged to do more, but Lanthier said it hasn’t been easy for rural-based groups to tap into the millions of dollars that have been promised, simply because of a lack of data to back up their requests.

She pointed to the Rapid Housing Initiative announced late last year by Ottawa for projects that had to be completed within a year of financing.

“There was no way that we were prepared to do that,” she said. “We didn’t have the data.

“We have all kinds of ideas. We are innovative in our thinking in small communities because we have to be and we were not able to access that funding at that time.”

She also pointed to public transportation as part of the criteria for accessing funds.

“So many communities in this province don’t have transportation for people who don’t have cars,” said Lanthier. “There are so many barriers that urban centres don’t have.

Lathier said they have in communities such as Lunenburg, near her home.

“The number of short-term rental accommodations has skyrocketed, from our perception,” she said. “We don’t have data, and so we can’t we cannot actually prove that.

“But it is, it appears, to be a real issue in impacting the availability of affordable housing, affordable rental housing.”

Dalhousie University assistant professor Ren Thomas, co-chair of a new provincial affordable housing commission, told the committee Nova Scotia needed to look to other provinces for inspiration on how to tackle the problem.

“We need to share data and information, learn from each other and collaborate on projects more than we’re doing now,” she said. “We also need to protect the affordable units that we have already built.

“There is, as we know, a lot of good work being done across Canada that we can learn from.”