During last week’s trading, there were more investors seeking to buy safe havens (gold, Japanese yen and to a lesser extent, the Swiss franc), with increasing losses due to the outbreak of the Coronavirus in the second largest economy in the world, and its expansion to many countries around the world. This is in addition to the renewed political tensions in Germany, the United States and Britain, and these factors were catalysts for gold investors to push prices to the $1585 resistance, near its highest level in seven years. COVID-19, the name of global epidemic, has exceeded 1,600 deaths and infected more than 68,000 cases in China alone. The Chinese government does not stop taking further measures to contain the crisis situation. The last of these measures, senior officials of the ruling Communist Party in Hubei and Wuhan were sacked and replaced last week.

Despite the Chinese measures. Many, including the White House, have expressed concern about transparency from China, noting that US health personnel have not yet been allowed in. The Financial Times quoted a famous epidemiologist in London expressing concern that only about a tenth of the cases might be detected correctly. In Wuhan, it is suggested that the screening process may be more extreme, as it affects one out of 19 cases. On the economic side, the results of the Chinese economic data for January and February will be distorted by the Lunar New Year holiday this year, due to the new Coronavirus (Covid-19), the data will therefore be of very little value in the market.

Economists warn that optimism about controlling the epidemic is premature. Even if the auto industry and other businesses resume as planned, the activity will not return to normal until at least mid-March. The losses are expected to be so great that experts have lowered estimates of China’s economic growth. Economists, including Capital Economics, believe that growth, which has already reached its lowest level in several decades, may drop to 2% in the three months to March, down from the official quarterly figure of 6%.

Great trade opportunities are waiting – don’t wait to profit from this pair!

According to the technical analysis of gold prices: As we expected before, we now confirm that gold prices are still inside the formation of a bullish channel and the recent global developments may push the price of gold to the $1611 psychological resistance very soon. Yellow metal purchases do not stop while the Coronavirus persists. Prices ignore the technical indicators reaching overbought areas, as bull control factors are increasing. There will be no bearish correction of gold prices without a break below the $1550 support in the near term. We expect quiet moves at the beginning of this week’s trading in light of the American holiday, while observing the developments of the Covid 19-Chinese epidemic.

Several weeks ago, two doses of vaccine were given to the animals. Time was needed to then assess their immune response against a control group.

So how effective exactly is the vaccine so far?

“In the vaccinated animals – the ones that responded to the vaccine – we saw almost undetectable amounts of virus afterwards,” says Gerdts. “So, that’s very good news, and in comparison to the control group per swap… this is a range in a 50,000 fold reduction of it.”

All of the ferrets that were infected received what Gerdts says is a ‘high’ dose, or one million particles of the disease. Depending on exposure levels, it’s not even in the range of what a human would be exposed to, even with a high ‘virus shedder.’

Data on the lungs of the ferrets is still being analysed, but initial results indicate a very high immune response as well as high levels of neutralizing antibodies. It does not appear as though any other organs were affected by the virus either.

At this point, Gerdts says they are now in the midst of producing clinical grade vaccine doses that can be used in humans. He calls it the most time consuming part of the vaccine development.

In the meantime, they’re also conducting safety studies – which are required by regulators to essentially move on to human trials.

“In these safety studies, we’ll address whether there’s any unwanted effects or any adverse events to the vaccine. And also with this particular disease there is concern about what is called ‘disease enhancement’ where the vaccine would actually enhance the disease. So, there’s particular studies that will help us to rule out that our vaccine will do that.”

Gerdts admits that there is some concern that certain vaccines being developed currently may actually make the disease worse. It happened when a vaccine was developed for the virus that causes Dengue Fever several years ago.

“The technology that we have chosen is one that has a very well proven track record in humans and animals… and the advantage of that, is that it’s easily ‘scalable.’ So, at the end, we can produce millions of doses in a single run in a manufacturing facility. So while maybe it’s a bit slower at the moment, the advantage of our vaccine will be that it’s easier to scale and more cost effective.”

If all goes well, human trials are scheduled to begin in the fall.

“This is a vaccine made by Canadians for Canadians. So, we will make sure that our vaccine is available to Canadians at the highest priority.” 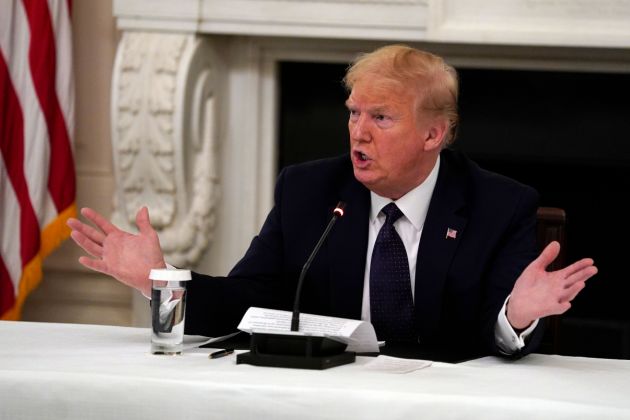 That, on the same day the World Health Organization placed a pause in COVID-19-related testing of hydroxychloroquine after the esteemed medical journal The Lancet published a finding that, among patients with coronavirus who received the drug, the authors “estimated a higher mortality rate.”

“The authors reported that among #COVID19 patients receiving the drug, when used alone or with a macrolide, they estimated a higher mortality rate”-@DrTedros

“I happen to be taking it…Right now,” Trump said to surprised reporters at the White House last Monday. “Yeah. Couple weeks ago I started taking it. Cause I think it is good. I have heard a lot of good stories. And if it is not good, I will tell you, alright, I am not going to get hurt by it.”

“What do you have to lose?” Trump said at the time.

TORONTO —
U.S. President Donald Trump is no longer taking the malaria drug hydroxychloroquine, he said in an interview Sunday, after weeks of promoting it as a treatment for the novel coronavirus.

In an interview with Sinclair Broadcast’s program “Full Measure With Sharyl Attkisson,” Trump said he had completed a two-week course of the drug, which has not been proven to prevent or treat COVID-19.

“Finished, just finished, yeah,” he said. “And by the way, I’m still here. To the best of my knowledge, here I am.”

A week ago, Trump revealed that he had been taking the drug himself to protect against the virus, despite his own officials cautioning that the drug should not be used outside of hospital or research settings, due to potentially fatal side effects.

His doctor did not prescribe it to him, he said. He requested it specifically.

The FDA-approved drug is used to treat malaria as well as lupus and arthritis. Trump has frequently touted it as a potential treatment in his press briefings, citing anecdotal evidence and limited studies.

In the Full Measure interview, Trump said he took the drug because two staffers in the White House had tested positive, reiterating that he had heard “tremendous reports” about the drug’s effects.

“[Hydroxychloroquine] has had tremendous, if you look at it, tremendous, rave reviews,” he said.

No rigorous, large-scale study has found the drug to be effective for treating or preventing COVID-19.

The World Health Organization announced Monday that it was temporarily dropping hydroxychloroquine from its list of experimental treatments under study. The WHO pointed to a paper published last week in the Lancet that said those taking the drug could be at a higher risk of death and heart problems.