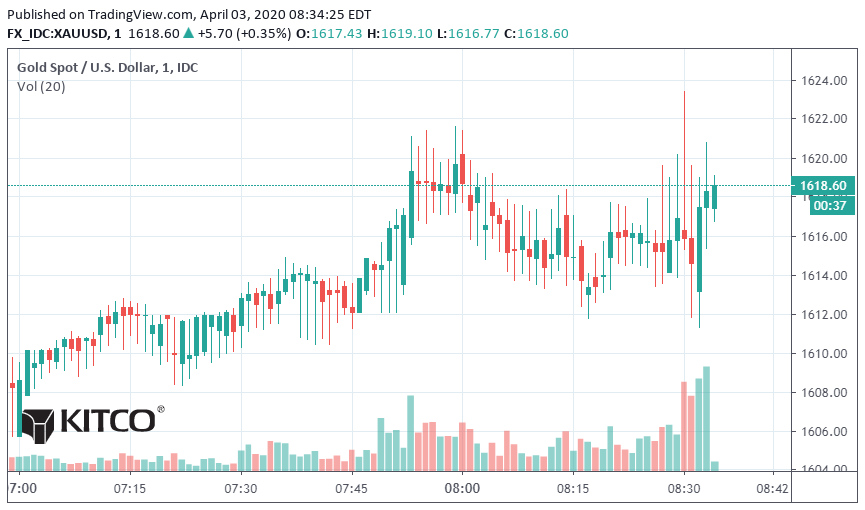 (Kitco News) – The gold market is seeing a modest push higher as the U.S. economy lost 701,000 jobs  in March, according to the Bureau of Labor Statistics.

The data was a lot worse than expected as economists were expecting to see the economy shed 100,000 jobs.

Meanwhile, the unemployment rate came in at 4.4%, compared to February’s level at 3.5%; consensus forecasts were calling for a reading at 3.8%.

There is some mixed sentiment in the marketplace following the weaker than expected data. The gold market is steady to modestly higher on the day following the weak employment report. June gold futures last traded at $1,644.20 an ounce, up 0.42% on the day.

The monthly nonfarm payrolls report is traditionally highly anticipated and a critical gauge for the health of the U.S economy; however, many economists were dismissing the data ahead of the release saying that it wouldn’t capture the full extent of the weakness in the labor market.

“We do not expect that acute stress to be reflected in the employment report released on Friday,” said economists at Nomura ahead of Friday’s numbers. “The March employment report is likely to be a poor preview of what lies ahead.”

Thursday, weekly jobless claims showed that 6.6 million people applied for unemployment insurance last week. The record number of claims doubled the previous week’s level of 3.3 million. The U.S. economy has come to a screeching halt as states and cities initiate lockdown measures, asking people to stay home to slow the spread of COVID-19.

Most economists have said that they are waiting for April’s employment report to see how the spreading coronavirus has impacted the U.S. economy and labor market.

Andrew Grantham, senior economist at CIBC, also said that he expects the worst is still to come.

“Given the scale of job losses implied by those weekly claims figures, the unemployment rate will likely move above 10% in short order in Q2,” he said.

MONTREAL —
Environment Canada has issued a heat warning for Montreal and the region with warm, humid air settling over the area.

“The combined values of temperature and humidity will give humidex values that will reach 40,” Environment Canada says.

The heat is expected hit the Montreal, Laval, Longueuil and Chateauguay areas and taper off in the evening as precipitation arrives.

During a heat wave, residents are reminded to drink plenty of water and stay in a cool area.

Temperatures in the 30s are expected for the Sault and area Thursday and into the weekend, says Environment Canada. The humidex is going to make it feel more like 36 degrees Celsius and overnight lows will range from 16 to 20.

The full text of a release from Environment Canada follows:

Heat Warning in effect for:

A heat event is expected Thursday into the weekend.

Inland from the Great Lakes, daytime high temperatures near 30 with humidex values near 36 are expected over the next few days. Overnight lows will range from 16 to 20 degrees Celsius.

Areas near the Great Lakes will feel slightly cooler temperatures.

Please refer to your public forecast for further details on expected temperatures.

Hot and humid air can also bring deteriorating air quality and can result in the Air Quality Health Index to approach the high risk category.

Never leave people or pets inside a parked vehicle.

Investing.com – Federal Reserve policymakers discussed the need to bolster forward guidance in the coming months when they met last month, and suggested that the jury was still out on the use of yield curve control, according to the Fed’s June meeting minutes released Wednesday.

“Various participants noted that the economy is likely to need support from highly accommodative monetary policy for some time and that it will be important in coming months for the Committee to provide greater clarity regarding the likely path of the federal funds rate and asset purchases,” according to the minutes.

There was also support to tie forward guidance to economic metrics, with a number of policymakers suggesting future monetary policy be linked to inflation outcomes.

“Participants generally indicated support for outcome-based forward guidance. A number of participants spoke favorably of forward guidance tied to inflation outcomes that could possibly entail a modest temporary overshooting of the committee’s longer-run inflation goal but where inflation fluctuations would be centered on 2 percent over time,” the minutes showed.

Fed members discussed two tools for conducting monetary policy when the federal funds rate is at its effective lower bound, including forward guidance and large-scale asset purchase programs in supporting employment and inflation and an approach that caps or targets interest rates along the yield curve — a measure allowing central banks to target specific government bond yields through the purchase and sale of bonds, to help keep lending rates near zero.

Pointing to a review of the yield caps or targets (YCT) policies the Federal Reserve followed during and after World War II and that the Bank of Japan and the Reserve Bank of Australia are currently employing, nearly all Federal Open Market Committee members indicated that they had many questions regarding the costs and benefits of such an approach.

“The three experiences suggested that credible yield curve target (YCT) policies can control government bond yields… and may not require large central bank purchases of government debt,” the minutes showed. “But the staff also highlighted the potential for YCT policies to require the central bank to purchase very sizable amounts of government debt under certain circumstances … and the possibility that, under YCT policies, monetary policy goals might come in conflict with public debt management goals, which could pose risks to the independence of the central bank.”

With the central bank is likely to persist with ensuring rates remain lower for longer, yield curve control is unlikely to make into the Fed’s toolbox in the immediate future. “Yield curve control is still under discussion, though FOMC members still have “many questions” on the costs and benefits. It’s probably not imminent,” Pantheon Macroeconomics said.

Following their June 9-10 meeting, Fed officials left interest rates in the range of 0%-to-0.25% and signaled that near zero rates would continue through at least 2022.

In their post-meeting statement, they vowed to persist with bond purchases “at least at the current pace to sustain smooth market functioning, thereby fostering effective transmission of monetary policy to broader financial conditions.”

The Fed’s balance sheet has declined by $12.4 billion to $7.08 trillion as of June. 24, compared with the week prior, driven by a decline in demand for the Fed’s dollar swap lines from overseas central banks.

The U.S. central bank’s balance sheet stood at about $4 trillion just before the pandemic struck in the U.S. in early March.

Threat of a Second Wave

Since the Fed’s last meeting, the U.S. has seen a greater resurgence in infections that has forced states to roll back plans to speed up the pace of reopening businesses.

In testimony before the House Financial Services Committee on Tuesday, Federal Reserve Chairman Jerome Powell, acknowledged the threat of a potential second wave of infections on the economy.

A second wave could “force government and force people to withdraw again from economic activity … and “undermine public confidence, which is what we need to get back to lots of economic activity,” Powell said.

“Output and employment remain far below their pre-pandemic levels. The path forward for the economy is extraordinarily uncertain and will depend in large part on our success in containing the virus,” he added.

After incidents at Toronto building sites, Canadian real estate needs to wake up to realities of rac – Mortgage Broker News