Host Alicia Keys opened the awards by addressing Bryant’s death, in a “the show must go on” sort-of way, conceding the challenge that posed given the celebratory nature of the event. Tributes continued throughout the evening, with Bryant’s jersey appearing multiple times as the night wore on, and further recognition in a segment devoted to the late rapper Nipsey Hussle, who died in March. 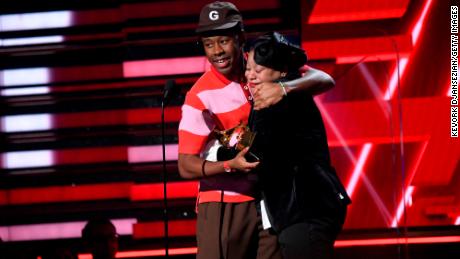 While there were fleeting references to current events — including the impeachment of President Trump, gay rights and diversity — the telecast was perhaps most memorably punctuated by emotional moments built around family. Camila Cabello, for example, serenaded her teary-eyed father, and Tyler, the Creator brought his mother on stage with him to accept an award, thanking her for raising him so well.
The Grammys have seldom felt quite as apolitical during the Trump administration. The 2018 edition included a surprise appearance by Hillary Clinton and several pro-immigrant messages; and former first lady Michelle Obama kicked off last year’s show flanked by several female artists, to a raucous ovation. (Obama won the Grammy for best spoken word album on Sunday for her audio book of “Becoming.”)
Notably, the controversy surrounding the organization responsible for presenting the Grammys, the National Academy of Recording Arts and Sciences, went unacknowledged on screen. That ongoing public-relations crisis was triggered by the ouster of academy chief Deborah Dugan, who subsequently sued, saying she was fired after raising concerns about sexual harassment and irregularities in the voting process.
The Grammys place a greater emphasis on performances than the other academy-backed award shows — to the point where who wins can feel secondary — and in her back-to-back stints as host, Keys has used her talents to further showcase music by performing in addition to presiding over the telecast. 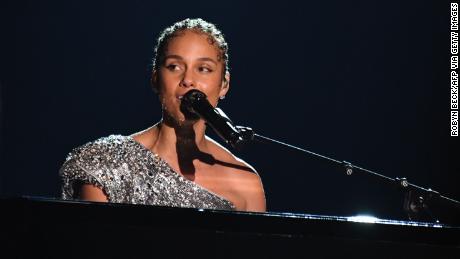 “We got a lot to change, we got a lot to do,” Keys said in closing the show. “Keep speaking the truth.”
Keys, again, seemed to thread that needle, on a night where the much-discussed power of music to heal and unite was tested — to a greater degree than usual — by the somber news of the day.

Premier François Legault does not intend to celebrate his 25-year political career this year.

He became Minister of Industry in Lucien Bouchard’s PQ government on Sept. 23, 1998, but was elected on Nov. 30 of the same year as the representative for L’Assomption, the riding in which he is still a member.

In a news conference on Friday at the end of a caucus meeting of his party’s elected officials in a Laval hotel, the CAQ leader said that neither he nor his party had any intention of celebrating this anniversary.

He pointed out that he is still younger than the former dean of the National Assembly, François Gendron. And smiling, he alluded to the U.S. President.

“I’m quite a bit younger than Mr. Biden, apart from that!” he said.

Legault is 65 years old, while the President is 80.

However, Legault is now the dean of the House. According to recent data, he has served as an elected official for 20 years, 6 months, and 27 days so far.

The premier was quick to add, however, that he has taken a break from politics.

This report by The Canadian Press was first published in French on Jan. 27, 2023.

Justin Trudeau called on his MPs to rally together to confront the country’s economic and health care crises, as Conservative Leader Pierre Poilievre said the Prime Minister has already missed the mark and should get out of the way.

In competing speeches to their caucuses on Parliament Hill on Friday, the two leaders set the agendas for their parties heading into the winter sitting of Parliament and disparaged their opponents – a sign of the tone to come in the House of Commons.

According to Mr. Trudeau, the Conservative Leader exploits people’s anger and fears and twists facts for personal gain. Mr. Poilievre said the Prime Minister turns a blind eye to people’s suffering and dodges responsibility while leaving the country worse off.

Apart from the blistering attacks, both leaders focused much of their speeches on the same issue: the rising cost of living that is pushing households to the brink.

“These are difficult times,” Mr. Trudeau said at the outset of his speech, which struck a sombre tone. He rolled out a new slogan for the governing Liberals: “Meet the moment.” The Prime Minister repeated the phrase several times, urging his MPs to rise to the challenge of strained health care systems and pinched pocketbooks.

“These are difficult times, but that’s why our Liberal team has decided to work even harder,” Mr. Trudeau said, promising a future with secure jobs, “where everyone has a real and fair chance of success.”

Mr. Poilievre made a similar pitch, speaking of a country where it doesn’t matter who you know, but rather what you can do. But the Conservative Leader struck a much more aggressive tone than Mr. Trudeau, launching into a scorching assessment of the Prime Minister’s tenure. He mentioned the country’s crime rates, its rising cost of living, its drug overdoses and its chaotic airports.

“Everything feels broken,” Mr. Poilievre said, adding the Prime Minister “gets very angry when I talk about these problems. He thinks that if we don’t speak about them out loud that Canadians will forget that they exist.”

While lobbyists and consultants have “never had it so good,” Mr. Poilievre said, other people are suffering. “There is pain in the faces you do not see,” he added, addressing Mr. Trudeau, who was not present.

Last year, The Globe and Mail reported that the total value of federal outsourcing contracts had climbed 74 per cent since Mr. Trudeau took office, from $8.1-billion in 2015 to $14.7-billion in 2022.

Turning one of Mr. Trudeau’s past slogans against him, Mr. Poilievre said: “You told us that ‘better was always possible.’ And yet everything is worse, and you blame everyone else.”

For his part, the Prime Minister lambasted Mr. Poilievre for pushing cryptocurrencies, which the Conservative Leader had championed as an investment that would help people “opt out of inflation,” just months before the crypto crash.

Mr. Trudeau said the Liberal vision “could not be more different” from that of “politicians like Mr. Poilievre, who have no real solutions to offer, and who just try to exploit the anger and concerns that people do have.”

“It’s just plain wrong when you twist the facts, or make things up for political gain. That’s not responsible leadership,” he said of Mr. Poilievre.

Heading into the second year of his second minority government, Mr. Trudeau also floated the prospect of another election, telling his MPs to be “ready for anything.”

Shachi Kurl, president of the Angus Reid Institute, said the Conservative Leader is already more polarizing than his predecessors were at the same times in their tenures. Mr. Poilievre has significant negatives among key voting demographics, including women and Quebeckers, she said.

Polling released Friday by Leger for the Canadian Press showed the Liberals and Conservatives tied at 34-per-cent vote intention, the NDP sitting in third at 19 per cent and the Bloc Québécois at 7 per cent.

Neither Mr. Trudeau nor Mr. Poilievre mentioned NDP Leader Jagmeet Singh at all in their speeches. Mr. Singh ended the week in Victoria, where he told reporters he had heard from people feeling squeezed on housing costs and unable to access health care.

He said more health care workers need to be recruited, properly compensated and trained. And he said expanding for-profit health care services, as Ontario and Alberta have proposed doing, will only exacerbate staffing shortages.

“While the Prime Minister has been applauding private, for-profit delivery in Ontario, and not taking the crisis seriously, the Conservative Leader, Pierre Poilievre, has also been cheering on the privatization and for-profit clinics that make things worse,” Mr. Singh said.

Supreme Court of Canada to rule on constitutionality of mandatory firearm sentences – CBC.ca

The Supreme Court of Canada plans to rule today on the constitutionality of mandatory minimum sentences in cases involving armed robbery and recklessly firing a gun.

In one case, Jesse Dallas Hills pleaded guilty to four charges stemming from a May 2014 incident in Lethbridge, Alta., in which he swung a baseball bat and shot at a car with a bolt-action rifle, smashed the window of a vehicle and fired rounds into a family home.

Hills argued the minimum four-year sentence for recklessly discharging a firearm violated the constitutional prohibition on cruel and unusual punishment.

A judge agreed and Hills was sentenced to a term of 3½ years, but the Alberta Court of Appeal overturned the finding of unconstitutionality and the sentence was increased to four years.

In each case, the sentencing judge declared the relevant mandatory minimum sentence to be unconstitutional, decisions that were upheld on appeal.