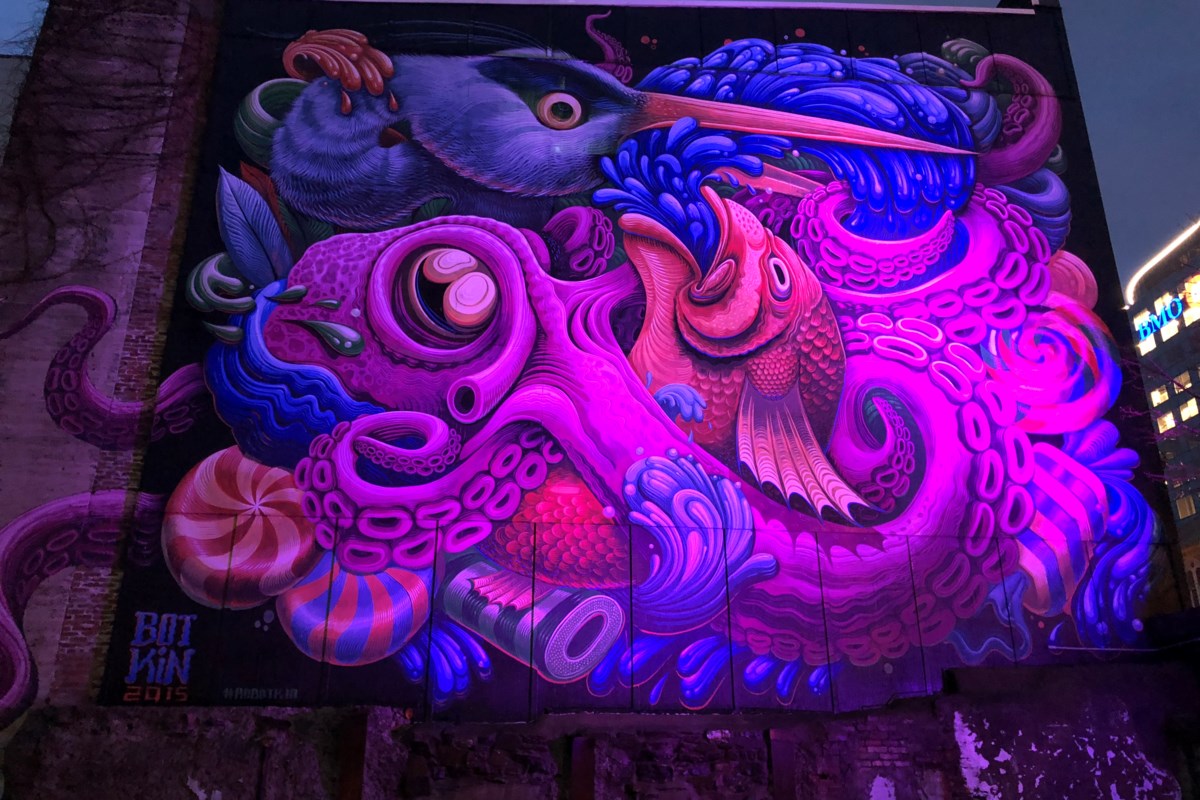 A new tour is coming to Downtown Halifax, combining the love of fine art with exercise.

Art is All Around Us, an art-centric experience, takes guests to landmarks near the Halifax waterfront.

The walking tour is being run by Argyle Fine Art and facilitated by Natasha Grenke, a watercolour artist who received her Fine Arts degree from NSCAD University in 2019.

Grenke, originally from Edmonton, has spent the past four years “enjoying the East Coast lifestyle,” and the “beautiful Nova Scotia scenery.”

Downtown Halifax’s vibrant art scene dates back decades and Art is All Around Us hopes to highlight the hidden gems the city has to offer.

Among the stops is the iconic and soon-to-disappear mural beside Freak Lunchbox. The 2015 mural painted by Jason Botkin depicting an octopus and fish wrestling with blue heron will soon become hidden by a new development next door.

Adriana Afford, owner of Argyle Fine Art, has been with the Barrington Street gallery from the beginning. She noticed a lack of guided art tours around Halifax and hopes to change that as international border restrictions begin to ease and tourists return to the province.

With the pandemic in mind, the tour takes place exclusively outdoors and is limited to groups of 10 to 12 people.

“It’s intended for not only people travelling,” Afford said, “but local people that maybe haven’t really done a walk around the city in a while.”

Starting from the gallery, the tour “then takes people around the city, exploring a lot of the new murals that have been put in place, as well as mentioning some really interesting architectural sort of points throughout the city,” Afford said.

The biggest logistical challenge facing Afford’s excursion is the number of steep hills in the city. While the tour is approximately four kilometres, Afford says her team worked hard to create a route that will highlight as many sights as possible while keeping the trek manageable.

Afford praised the Harbour Hopper as a great way to get introduced to the city, but added their trips “don’t really talk about the creative culture” of Halifax, something the Art is All Around Us Tour hopes to highlight.

The walk wraps up at Rousseau Chocolatier, with a chocolate tasting where guests can see the magic of art in local cuisine.

Initially set to begin Tuesday, organizers are pushing the launch to Saturday, August 14, as the final route takes shape.

The two-hour event takes place on Tuesdays and Saturdays at a cost of $30 per person or $95 for a family pass. Additional information and tickets can be found here. 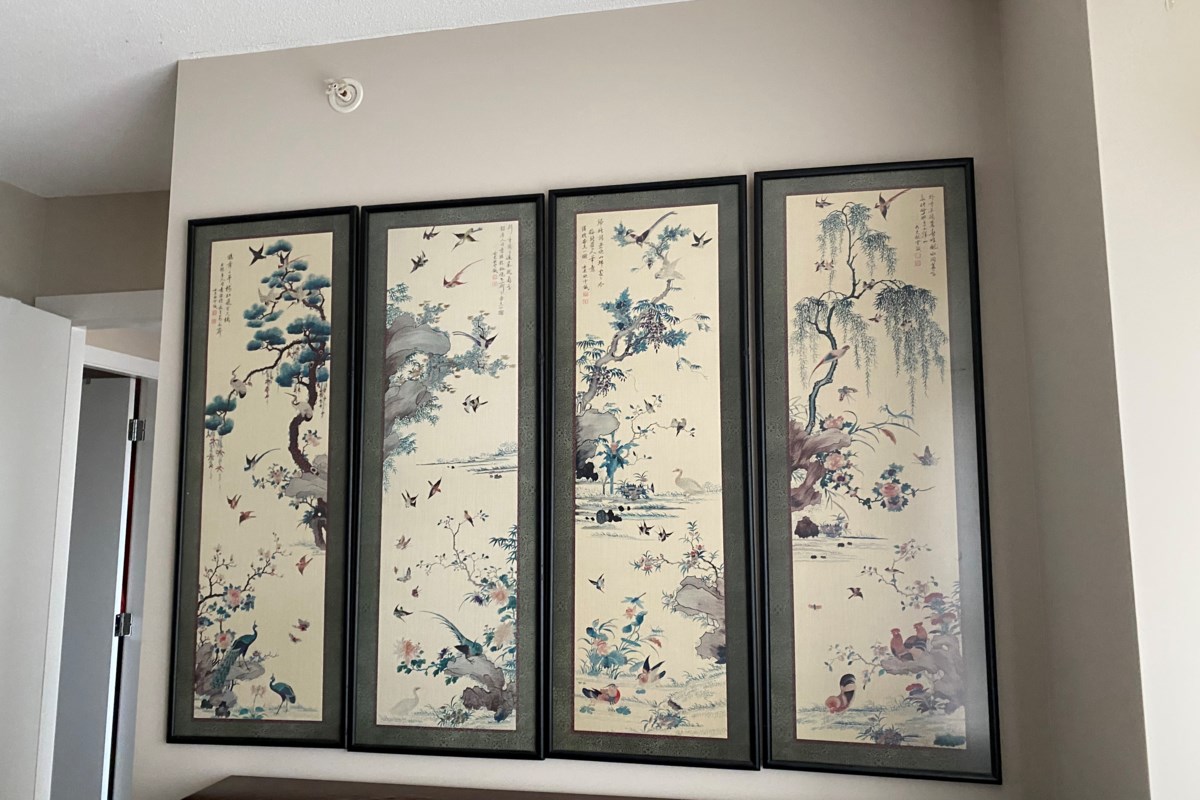 Au is still looking for a venue to showcase such art, but he’s already collecting items to exhibit, including one from retired Richmond chartered accountant James Heish, who donated a piece of Chinese decorative needlework this week.

“My idea for the gallery is more like a mobile communication hub. The artwork displayed in the gallery shouldn’t be limited to one culture. Instead, it could be as diverse as possible, encouraging more people to share their thoughts on who we are and where we are going as an evolving community,” said Au.

The artwork exhibited at the gallery can be returned to the owner when the show comes to an end, added Au, noting that hopefully, Heish’s donation could stir up conversations in the community.

Heish told the Richmond News he got his piece dozens of years ago through an auction held by a bank and, since then, it has been kept in his bedroom.

Au said some Chinese immigrants told him how surprised they felt when they first came across some pottery work in galleries around the world, including some from European countries and the Middle East – with the colours being as fresh as painted yesterday and the details so delicate.

The most important thing, added Au, was that they felt ignorant after seeing these art pieces.

“They said we wish we could have known these fantastic work earlier. Looking at other countries’ art broadens our horizons and inspires us to embrace their languages and cultures,” said Au.

“Artwork represents history and tells fascinating stories, which could be used as a way to connect us.”

Heish’s donation is now well-preserved at Au’s home, and later, they will invite the public to a small exhibition when they find a decent place to display the work. The five Nanaimo residents tasked with advising city council on matters relating to public art are set to meet for the first time early next month.

“We were looking for people specifically who have demonstrated experience in aspects of visual arts and we wanted people who represented a variety of professions and experiences to be able to speak to public art,” city culture and events manager Julie Bevan said.

The members are all volunteers appointed to a two-year term. Bevan said they will be meeting “several times a year” and their duties will include serving on selection panels for art projects, reviewing and providing feedback on requests for proposals and calls to artists and helping the city proceed in line with its 2010 community plan for public art.

“Part of their role, big picture, is to champion the role of art, artists and creative practitioners and promote processes and policies at the city that support the livelihood of artists and to promote awareness and understanding about the public value of art in public spaces,” Bevan said.

Birch said he was drawn to the position because of his commitment to supporting the “cultural fabric” of Nanaimo.

“I’d love to see Nanaimo continue to develop an innovative and inspiring public art policy and body of public art that speaks to this place and honours Snuneymuxw and other regional Indigenous communities and sparks community connections,” he said.

As a conservator, Harrison has worked on public art work including the E.J. Hughes mural at the Vancouver Island Conference Centre and projects at the B.C. legislature, Vancouver Post Office and Victoria city hall. She said the 2010 community plan could use some updating.

“In the last 10 years Nanaimo’s grown a lot. Our public spaces and how we use them has also changed,” she said. “And I see that public art … can communicate and inspire and contribute in new and diverse ways and part of that is looking at our spaces now that we have in our community.”

Aside from writing and researching, Leduc has also studied and taught studio art and art history at the post-secondary level and has been a gallery curator. She said she’s concerned about how Nanaimo is represented through art and wanted to be involved with the decision making.

“This group, I think, is a really good addition,” she said. “A lot of big cities have such a committee and help to guide the selection choices and help to not just guide that, but to nurture more art activity. So it’s a reciprocal thing.”

Vander Kooi has created public art projects with students from Bayview Elementary School and as participants of the NAG’s youth art groups. She also facilitated the creation of a memorial mural for murdered Nanaimo teenager Makayla Chang.

“I’ve participated with some public art in Nanaimo and I think it’s really an important part of our local culture in identifying who we are in a playful way,” she said. “So it’s part of my experience and it’s part of what I hope to continue to help support in the community.”

White-Hill has exhibited his work at the Nanaimo Art Gallery, painted murals at Beban Pool and this year he was awarded the City of Nanaimo’s Emerging Cultural Leader award. He said public art can have a role in educating people about the city’s Indigenous history.

“When there’s public art work it fundamentally shifts the nature of a space and the way that people interact with that space,” he said. “And I think it’s really important that Snuneymuxw is represented and our stories are talked about and that this is coming back to the surface in Nanaimo and teaching people about where they are and the history of this place.” 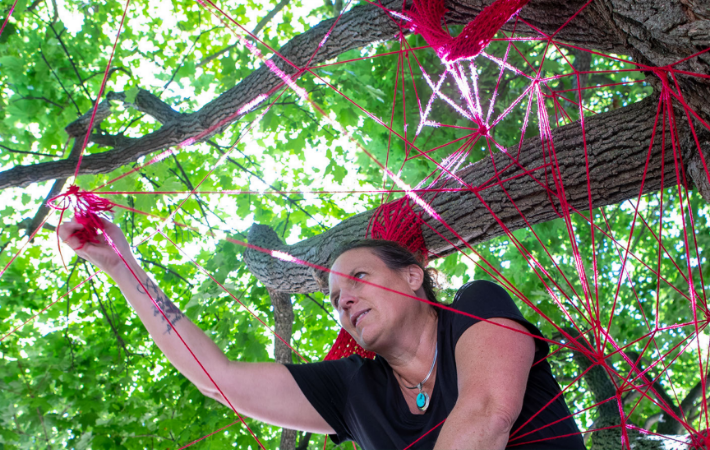 A release notes this live, one-day outdoor art installation on Sept. 18, reflects upon the challenges of the current global and national climate, including the impacts left by the pandemic and the realities of past and present racial discrimination. This is further emphasized by the discovery of Indigenous children buried on the grounds of residential schools over the summer.

In her art-work, Chambers asks “Where do we go from here – individually and collectively. How do we heal and remain hopeful?”

For the project, Chambers aims to create site-specific art installations for both indoor and outdoor spaces at museums, galleries, and cities across the country.

“This is a poetic and powerful public art project and I look forward to seeing this one-day installation take place in our community – creating conversation, connecting us through our desire and hope for a better future,” says Owen Sound Mayor Ian Boddy.

The installations will be used with red yarn, which she will reuse at various locations to act as a way of creating a visual and tangible image of connectivity. Also aimed as an act of decolonization and offering hope to find healing and a way of deeper understanding.

Tom Thomson Chief Curator and Director Aidan Ware adds this project responds to crisis with elegance, humanity, and a prevailing optimism for a future in which we are all more deeply connected, compassioned, and kindred.

“The Tom Thomson Art Gallery is honoured to join the other spaces across Canada in hosting this intimate and resonant performative art installation,” says Ware.

Each of the installations with be temporary, ranging from only a day, to six months.

Residents are invited to watch and engage with Chambers as she works on the art installation west of the Tom Thomson Art Gallery and the Library buildings on 2nd Avenue West.