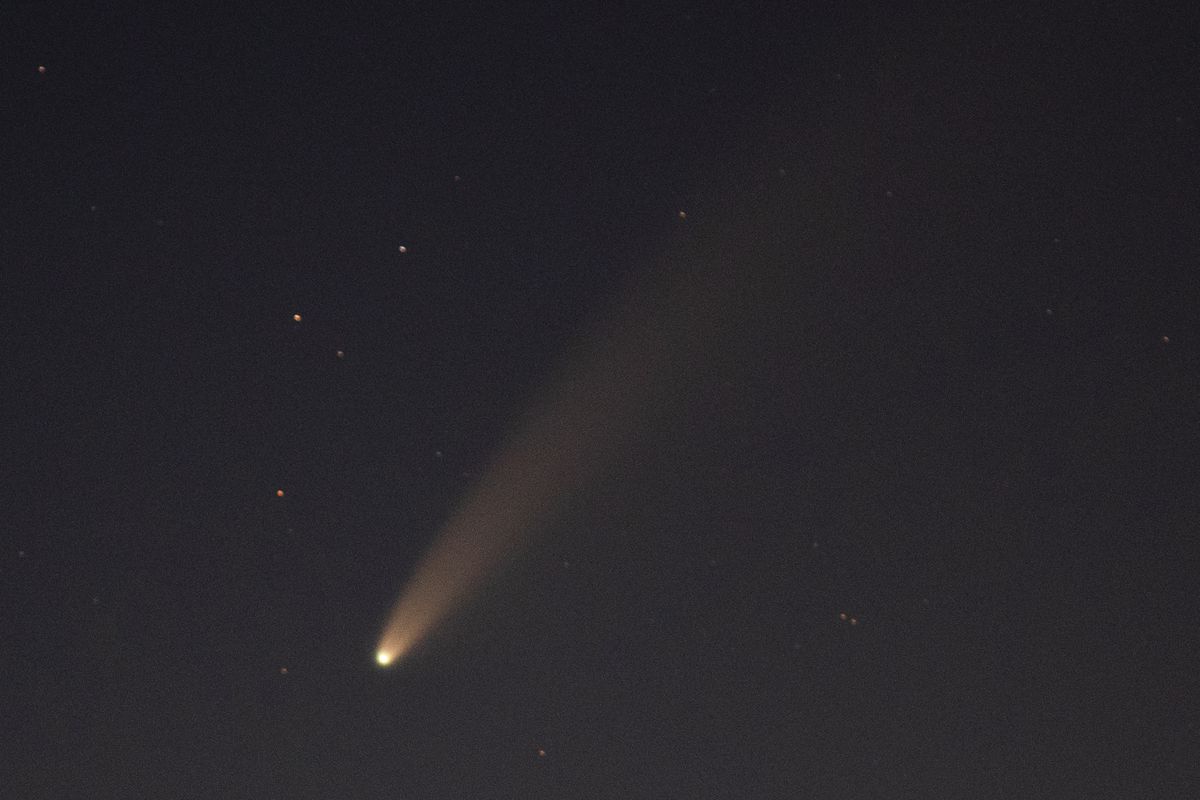 “Comets are like cats,” Canadian comet hunter and author David Levy once wrote. “They have tails and they do precisely what they want.”

Fortunately for backyard stargazers, Comet NEOWISE, a giant ball of ice and gas that is currently hurtling through our planetary neighbourhood, seems to want to put on a show. It is not as easy to spot as some of the great comets of the past. However, it is one of the best in years and makes an easy target for observers with clear, dark skies or even under city lights when helped out with a good pair of binoculars.

The comet was discovered in late March by NASA’s Near-Earth Object Wide-field Infrared Survey Explorer, an earth-orbiting satellite whose acronym, NEOWISE, gives the comet its name. Since then, the comet has been racing through the inner solar system, reaching its closest point to the sun on July 3. It is now on the outward leg of its brief visit and for the next week or so will be well-placed for viewing at twilight in the Northern Hemisphere.

Comets are icy fragments left over from the formation of the solar system. They range from less than a kilometre to tens of kilometres in diameter and spend most of their time far from the sun where they are too small and too faint to observe.

It’s only when a comet draws near to the sun’s warmth that the celestial magic happens. Frozen gasses, including water vapour and carbon dioxide, which make up the bulk of the comet’s mass, are released, forming a glowing ball, or coma. Dust particles freed up by the vaporizing ice trail away from the comet, catching the sunlight and forming a tail that grows longer and brighter the closer the comet is to the sun.

All of this looks far better in a photo, where a long exposure can reveal the full extent and colour of the tail in all its glory. In most cases, what the eye sees, is only the diffuse glow of the coma, which may appear as a tiny fuzzball in the sky, sometimes with a stubby tail sticking out to one side.

That’s essentially how Comet NEOWISE appears now and this weekend is prime viewing time across most of Canada. The comet is low in the sky, skirting the northwestern horizon at dusk. To find it, start looking about one hour after sunset – roughly 10 p.m. You need a good view to the northwest that is free from obstructions and preferably as dark as possible (I found it by observing from my local schoolyard in Toronto.)

For city dwellers, there are no bright stars in this part of the sky, but the familiar pattern of the Big Dipper can be found by looking higher up, where the dipper’s handle reaches nearly overhead. The dipper can serve as a guide for where to sweep the sky with binoculars.

If you’ve seen a comet before, you’ll know exactly when you’ve found it. If not, be patient. As long at the northwestern sky is cloud free and you are looking where the map indicates, the comet’s distinct glow should pop into view.

If you are underwhelmed by what you see, consider that Comet NEOWISE will be about 103 million kilometres away when it’s at its closest to Earth next week. But by the time it reaches the farthest extent of its elongated orbit, it will be more than 100 billion kilometres away. The comet will not be seen in our skies again till sometime around the 89th century. 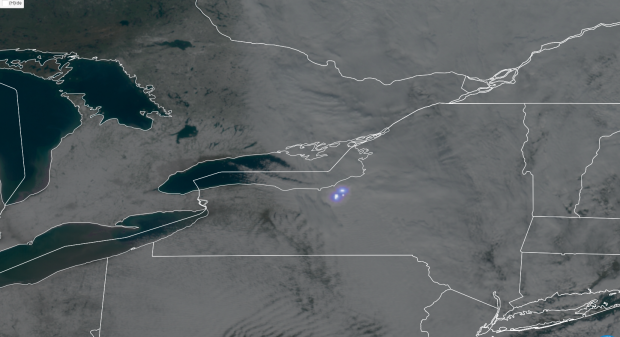 A meteor travelling an estimated 100,000 kilometers an hour is believed to have fallen into the earth’s atmosphere on Wednesday afternoon, resulting in multiple reports of a bright flash of light above Toronto and some streaks of fire in the sky across southern Ontario.

Around noon, a number of GTA residents reported seeing a fireball trail across the sky while others said they saw a large flash of nearly blinding light.

A camera on the CN Tower captured a split-second view of the flash of light across the Toronto skyline.

According to Dr. Denis Vida, a postdoctoral associate with the University of Western Ontario in their physics and astronomy department, a basket-ball sized meteor is believed to have entered the earth’s atmosphere at a 45-degree angle about 50 kilometers north of Syracuse, New York.

“We’re still waiting for the data to come in, but we think that the rough size of the object was probably in the order of 10 centimeters. And there’s still a lot of uncertainty.”

Vida said that it’s still too early to know if some pieces of the meteor made it to the ground or if the rock completely disintegrated upon entry. He said the large flash of light seen primarily over Syracuse would have been the result of the meteor being fragmented by the earth’s atmosphere.

“The flash was probably about 10 times brighter than the moon, the full moon,” he said. “At that moment the body either completely disintegrated or lost a lot of mass.”

As of 5 p.m., more than 80 reports were made to the American Meteor Society regarding a fireball seen on Dec. 2.

Those in the United States appeared to hear an audible boom following the event, Vida said.

“Someone called me and said that their house shook so much that they thought a tree fell on the house.”

Vida said that it’s not uncommon for meteors to enter the earth’s atmosphere and that people witness the event generally about once a month on a global scale.

“But locally. It’s much rarer.” 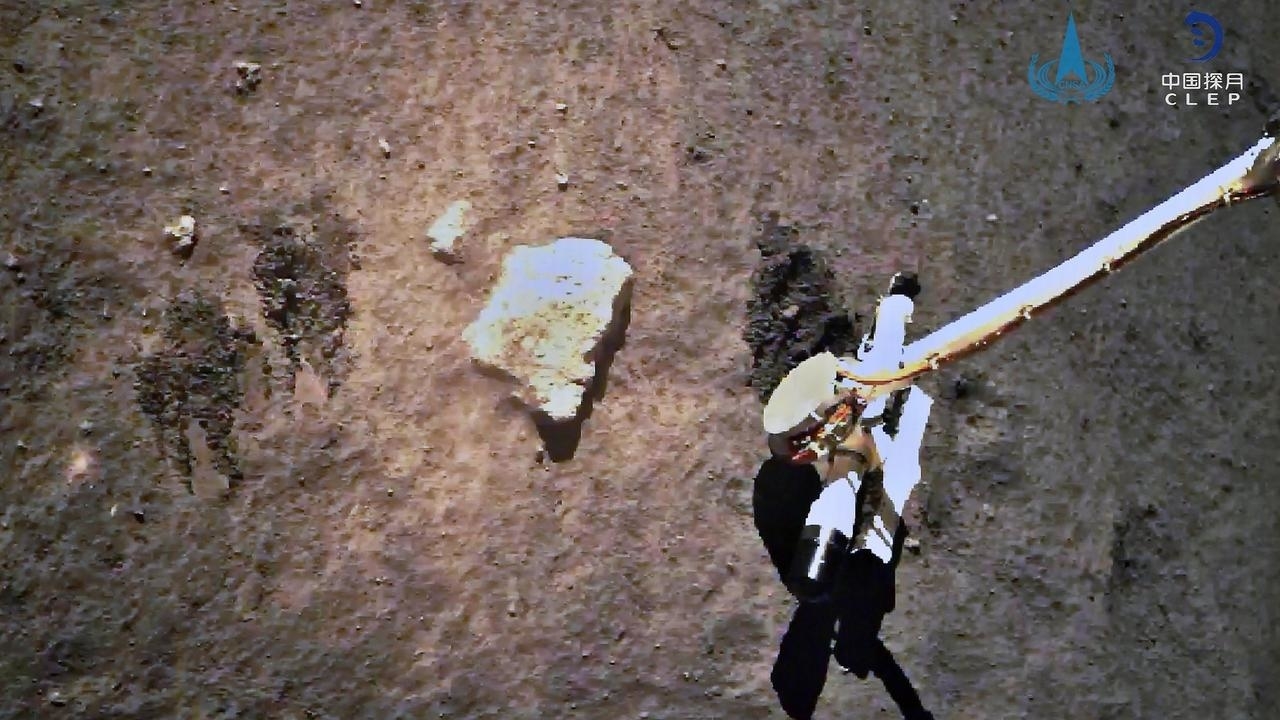 A Chinese space probe sent to gather material from a previously unexplored part of the moon has completed its mission and is preparing to send back the world’s first lunar samples in four decades, Beijing said Thursday.

The Chang’e-5 spacecraft, named after the mythical Chinese moon goddess, landed on the moon Tuesday and has now completed its gathering of lunar rocks and soil, the China National Space Administration said.

The spacecraft had been due to collect two kilograms (4.5 pounds) of material from an area known as Oceanus Procellarum — or “Ocean of Storms” — a vast lava plain, according to the science journal Nature.

State media said this week that the craft was preparing for “around 48 hours” of tasks on the lunar surface.

If successful, China will be only the third country to have retrieved samples from the Moon, following the United States and the Soviet Union in the 1960s and 1970s.

The CNSA on Thursday said the Chang’e-5 had completed the sampling and successfully packed the collected materials in a special container by Wednesday night.

“Scientific detection was carried out as planned,” the space agency said, without providing details.

The samples will be returned to Earth in a capsule programmed to land in northern China’s Inner Mongolia region in early December, according to US space agency NASA.

The latest on the coronavirus outbreak for Dec. 2 – CBC.ca

Canada-U.S. border rules: Why some travellers get to cross while others are shut out – CBC.ca