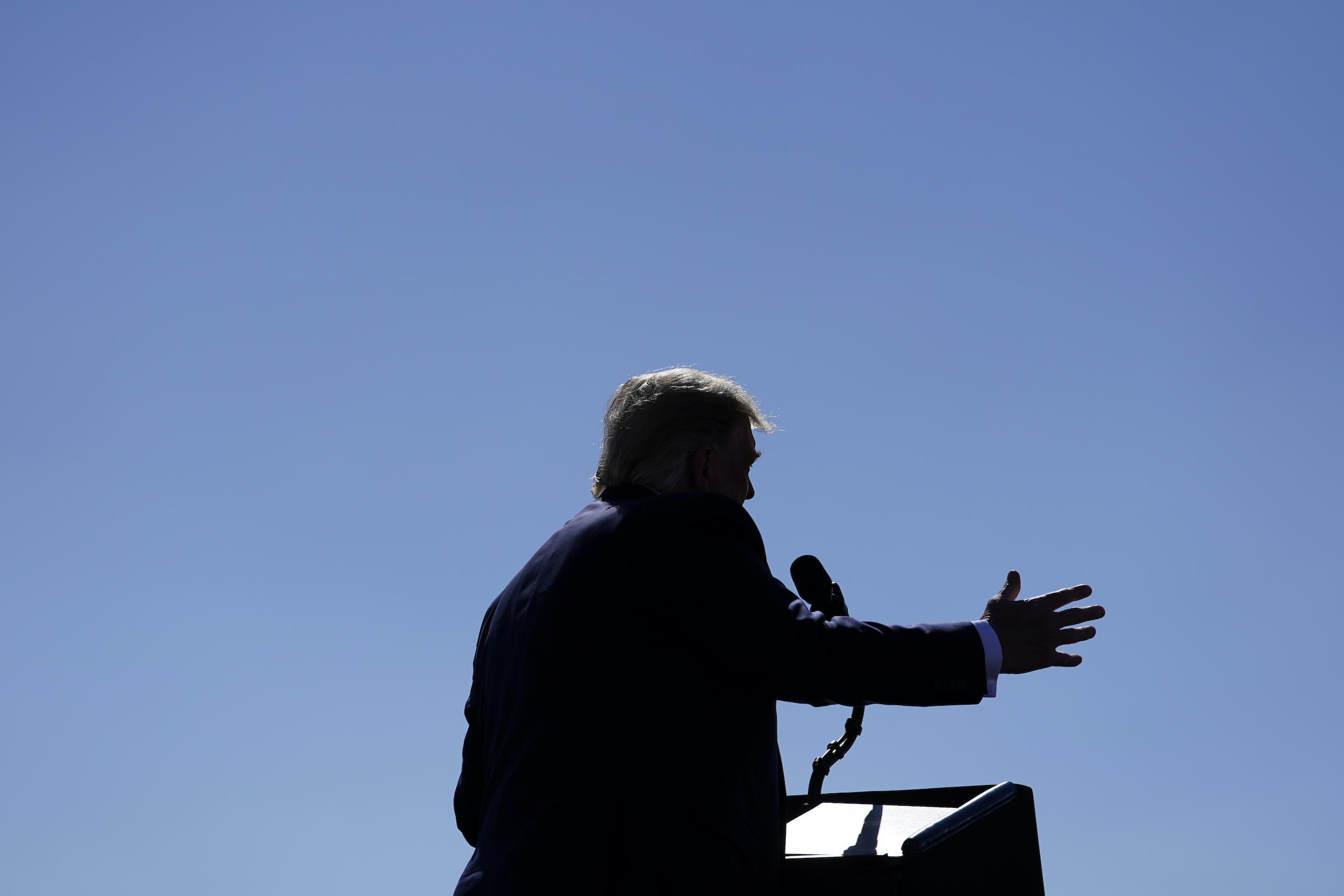 Hunter’s emails. Sounds familiar, right? Replace “Hunter Biden” with “Hillary Clinton” and we’re back in 2016 again. Perhaps that is President Donald Trump’s plan as we head into the home stretch of the election.

While the media might have been complicit in the “Hillary’s emails” story back in 2016, is there a danger of that happening again in 2020? Is it already happening?

Hardly any media outlets, except for conservative ones, are giving the story any credence at all. In fact, the biggest story to come out since the New York Post’s supposed “bombshell” on Hunter Biden was Katie Robertson’s New York Times piece that pretty much obliterated the Post story by showing that even writers at the Post didn’t want their names associated with it.

But should the media even mention the Hunter Biden story? Or what Trump says about Dr. Anthony Fauci? Or rigged elections? Or the debate moderators?

Should it even go down the rabbit hole of chasing any Trump-generated stories that are meant to distract us all from actual legitimate issues?

The argument to be made is that anything a president says is newsworthy and the media is simply reporting on what the president says. Then again, the counter-argument — and one that deserves weight — is that covering Trump as if he is a normal president is dangerous because there is very little that is normal about the Trump presidency. To normalize Trump because of his job title, perhaps, does a disservice to news consumers.

In a really smart essay on his “Reliable Sources” show, CNN’s Brian Stelter talked about how Trump can suck the oxygen out of any news cycle. Isn’t this what Trump wants? To be the center of attention, the main headline in the newspapers and the top story on the evening news — even if it’s for saying something controversial and really not all that newsworthy?

But Stelter asks, “Is all the attention, is all the air time for Trump — is it working for him this time around? Or is it now working against him?”

There do seem to be some signs of a Trump fatigue, even among his supporters. Even Fox News has stopped airing many of his rallies in their entirety. His recent town hall was watched by fewer people than watched Joe Biden’s town hall that aired at the same time.

You’re, obviously, going to still see plenty of Trump stories between now and election day. But this time around, it feels as if the media is much less complicit in Trump’s strategy — if he actually has a strategy — of holding up shiny objects for everyone to look at. Instead of amplifying his message, it feels as if the media, this time, is exposing it for what it is.

HONG KONG (Reuters) – Hong Kong media tycoon and pro-democracy activist Jimmy Lai was denied bail on Thursday on a charge of fraud related to the lease of a building that houses his Apple Daily, an anti-government tabloid.

Authorities have intensified a crackdown on key opposition figures in the Chinese-ruled city since Beijing circumvented the local legislature and imposed sweeping national security legislation on the global financial centre on June 30.

While Lai’s fraud charge did not fall under the national security law, it marks the latest crackdown on pro-democracy figures in the former British colony, which was handed back to Beijing in 1997 with a promise to maintain the free-wheeling city’s way of life for 50 years.

On Wednesday, one of Hong Kong’s most prominent democracy activists Joshua Wong was jailed for more than 13 months for his role in an unlawful anti-government rally in 2019, the toughest and most high-profile sentencing of an opposition figure this year.

Lai, 73, and two senior executives of his company Next Digital, were charged on Wednesday on suspicion of concealing from and falsely representing the use of their office to their landlord, a public corporation set up by the Hong Kong government.

The charge stated they were not using the office space as permitted under the lease between 2016 to 2020, and had sub-let a part of the premises, resulting in benefits to Apple Daily.

Reuters was not immediately able to reach Lai or his lawyers for comment. Next Digital suspended trading on Thursday morning, pending an announcement containing “inside information”.

“This is about dirtying Jimmy up. It’s Beijing’s policing brought to Hong Kong,” Mark Simon, an associate of Lai, told Reuters.

An ardent critic of Beijing, Lai has been detained since Wednesday after reporting to the police for his arrest in August. Prosecutors applied to adjourn the case until April next year, according to local media.

In August, Lai was arrested after about 200 police officers swooped on his offices. Hong Kong police later said they had arrested nine men and one woman for suspected offences including “collusion with a foreign country/external elements to endanger national security, conspiracy to defraud” and others.

Suspicion of colluding with foreign forces carries a maximum sentence of life in jail under the new security law.

Lai has been a frequent visitor to Washington, where he has met officials, including U.S. Secretary of State Mike Pompeo, to rally support for Hong Kong democracy, prompting Beijing to label him a “traitor”.

The security law was introduced on June 30 and punishes anything China considers subversion, secession, terrorism or collusion with foreign forces with up to life in prison. After photos appeared on social media boasting of a daring bridge walk, the Michigan State Police are now investigating a case of felony trespassing on the Mackinac Bridge.

Michigan Bridge Authority Executive Secretary Kim Nowack said, “This is not a harmless stunt; it’s inexcusably reckless. This individual risked not only his own life but also the lives of those crossing the bridge beneath him, and would have threatened the safety of emergency personnel and Mackinac Bridge Authority (MBA) staff had a rescue been needed.”

Director Paul C. Ajegb, member of the MBA Michigan Department of Transportation (MDOT) underscored the need for a thorough examination of security protocols.

“While the Michigan State Police continue their investigation, I have also asked the MDOT employees at the bridge to conduct a thorough review and implement measures to prevent future incursions.” Michigan State Police (MSP) D/Sgt. Gary Demers at the St. Ignace Post said “the person responsible could be facing felony charges of trespassing at a key transportation facility, section 750.552c of the Michigan Penal Code.”

“This matter is being investigated by MSP,” said Demers. “We will use all of our resources to identify and prosecute this individual.”

Local police were called to investigate but the person could not be located.

After MBA staff became aware of photos posted on social media, apparently shot from the top of one of the bridge towers, police were called in to investigate.

Saskatchewan Health Minister Paul Merriman says the use of a photo of a gay couple in a government social media post about HIV numbers in the province is “disappointing,” but did not go as far as agreeing with criticism that the post was homophobic.

“I recognize it is very disappointing that that was the image that people were seeing when we put out an image of what people with AIDS, on a day that should be celebrated, of how far we’ve come with the treatment of AIDS,” Merriman said at the legislature on Wednesday.

The posts were shared on the provincial government’s Twitter and Facebook feeds on Tuesday, which was World AIDS Day. The post featured an image of two men and the message that HIV is treatable and urged people to get tested.

It drew criticism in hundreds of comments responding to the post.

On Wednesday morning, it was deleted and an apology was posted to the same social media accounts.

“Yesterday in marking World AIDS Day, Government of Saskatchewan social media pages used a photo that stigmatized HIV/AIDS and those that live with the disease,” said the statement.

“The photo has been deleted, and we unreservedly apologize.”

Yesterday in marking World AIDS Day, Government of Saskatchewan social media pages used a photo that stigmatized HIV/AIDS and those that live with the disease. The photo has been deleted, and we unreservedly apologize.

Merriman said he did not approve the post. It was shared by an official within the Ministry of Health.

“I will be speaking with [Saskatchewan Health Authority CEO] Scott Livingstone later on this afternoon to see what processes he has in place to make sure this doesn’t happen again.”

Saskatchewan has the highest rate of HIV transmission in Canada.

The most common risk factor for transmission in Saskatchewan is injection drug use, which accounts for 67 per cent of cases.

Jack Saddleback, the interim co-director of Out Saskatoon, said the posts reflected poorly on the government’s understanding of the issue.

“This is an archaic viewpoint, an outdated one … and quite honestly a homophobic kind of mentality when it comes to how we view HIV and AIDS,” said Saddleback.

He said the province should focus its efforts on reducing HIV rates on harm reduction.

Prairie Harm Reduction, formerly known as AIDS Saskatoon, requested $1.3 million from the provincial government to support its safe injection site, which opened this year in Saskatoon, but did not receive the funding.

Executive director Jason Mercredi said the World AIDS Day post was “tone deaf” and fails to recognize good work that has been done in Saskatchewan toward reducing the HIV rate.

“It just further reiterates that the government’s not taking addictions at the same level of seriousness as other issues,” said Mercredi.

“And it’s not getting the right attention. Harm reduction messaging should have been at the forefront of any World AIDS Day messaging in Saskatchewan.”

Statistics on HIV in Saskatchewan also show that Indigenous people account for 79 per cent of new cases.

Margaret Kisikaw Piyesis, CEO for the Canadian Aboriginal AIDS Network, said solutions from within the Indigenous community are needed to address the high rates of HIV in this province.

She plans to bring up the social media post at an upcoming meeting with provincial officials.

“This really reflects the fact that the government doesn’t care about what is happening here in this province,” said Kisikaw Piyesis.

“The government has not addressed this in ways that would help Indigenous people to look at solutions for what we are seeing in our communities.”

She said grassroots organizations are not receiving enough funding to provide support for people with HIV and AIDS, and that Indigenous people are less likely to seek help from provincial authorities due to systemic racism.