The Torontonian creator of a website and social media account spotlighting local Black-owned businesses is taking her initiative across the country with the launch of an expanded online store and a national database she hopes will soon have hundreds of listings.

Black Owned Canada debuted this week and its founder, Kerin John, is calling on business owners across the country to sign up to be featured.

“It’s going to be a great way for people to actually search for businesses instead of just scrolling through my Instagram page all day,” said John.

She hopes the 65,000 followers she has on her original Black Owned Toronto Instagram page also check out her new platform.

“Wherever you are in Canada, you’ll be able to go on the website and find what’s around you that’s Black-owned,” said John.

As part of Black Owned Toronto, John also operated an online store hosting about 20 companies at a time. For Black Owned Canada, she hopes to double her capacity.

John expects to have as many as 1,000 companies listed by the end of the year, sorted by city with descriptions, contact information and the option for shoppers to post reviews.

“People want to see feedback for every business,” said John.

The owner of Royaltea Coffee in Scarborough, Ont., Edil Hassan Mohamed, is listing her business on the new site, after being featured on John’s original Instagram account twice over the past year, as well as on her local online store.

Mohamed identifies as a Black business owner. She sources her coffee beans from Africa, but hadn’t marketed Royaltea Coffee as a Black-owned business.

However, she said being featured on John’s Instagram and website was “very positive,” as it led more people to her social media and drove up sales.

“Joining forces and working together, it helps,” said Mohamed.

John founded Black Owned Toronto in May 2020 as part of a personal commitment to buy from more Black-owned businesses, but she said finding them was a challenge.

Even more people went searching for Black-owned businesses to support after the death of an American Black man, George Floyd, at the hands of police in late May. The rise of the Black Lives Matter movement followed, and people from all backgrounds looked for ways to show support for the Black community.

Google trends show global searches for ‘Black-owned’ jumped in late May to June of last year. It has fallen since then, but has remained at a higher level than during the 10 years prior.

ByBlacks.com, an online magazine and Black business directory with more than 3,000 listing, said companies reached out to buy ad space to advertise jobs. 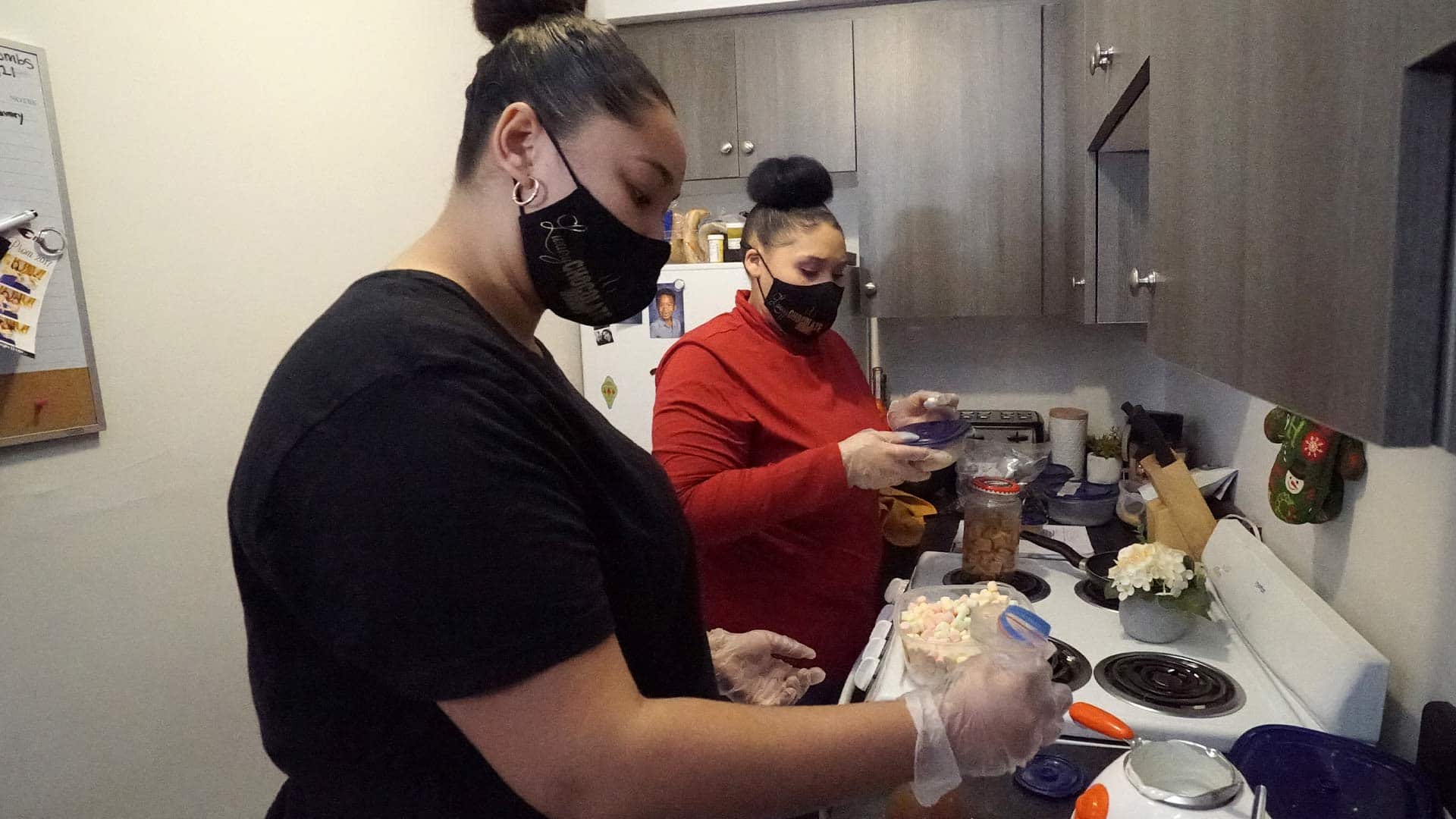 A new online shopping mall is giving Black business owners the opportunity to showcase their wares, and boost their sales during the pandemic. 1:57

“People are now more intentional to try everything they can to get these opportunities in front of Black Canadian audiences,” said Camille Dundas, co-founder and editor-in-chief of ByBlacks.com.

ByBlacks.com gets, on average, roughly 17,000 unique visitors per month.

The founder of AfroBiz.ca said their site got more exposure through the media, and many of the 4,000 businesses it lists reached out to say thank you — particularly those hard-hit by COVID-19 shutdowns.

“We started to be invaded by messages of appreciation for the work that we do. Many business owners were thankful saying that they were able to keep their businesses open and get clients just because the clients found them on AfroBiz.ca,” said Willy Mahailet, the founder of AfroBiz.ca and AfroBizWorld.com.

AfroBiz.ca was founded in 2017 as a Toronto-based website, but has since grown to include 68 Canadian cities. It has also expanded beyond a directory to include digital and business services, such as custom websites.

The challenge now is how to ensure the recent jump in interest in supporting Black-owned businesses is sustainable.

The idea of buying Black, and Black-owned business directories, have been around for decades.

“I remember when I was in high school there were Black directories, so this is actually bringing back something that seemed to just like fizzle out in the 2000s,” said Cheryl Thompson, an assistant professor at Ryerson University whose work focuses on race and stereotypes in the media, as well as cultural politics.

While business directories can be good resources, the challenge historically has been getting people to know they exist, she said.

“A Black directory still leaves it on the individual to have the desire to go and find those things,” said Thompson.

But Black Owned Canada’s online store may help some small businesses overcome the financial barriers to offering e-commerce themselves.

Ultimately, she said, growing Black-owned businesses to help achieve greater wealth in the Black community will take even more of a group effort.

“You’re stronger together than you are as an individual,” she said. “We have to realize in the 21st century, if there’s going to be any progress for [the] Black community, we have to do that together. We have to be a collective.”

John hopes her new website will play a part.

“We do not have as many dollars circulating in our community, in our businesses. So this is going to be an easy way to help uplift the Black community, especially during Black History Month,” said John.

OpenAI, which was sued alongside Microsoft and Github Inc.—companies that helped develop Copilot—said in court documents filed on Thursday that the complaint had major procedural problems and relied mostly on unspecific allegations.

OpenAI is the company behind other popular AI programs like the image-generating DALL-E and the chatbot ChatGPT; this month it received a $10 billion investment …

In a blog post published this week, video game captain of industry Electronic Arts (referred to as EA henceforth) outlined several of the accessibility features included in Motive’s popular horror title Dead Space. The Redwood City-based EA’s announcement coincided with the release of the updated game late this week.

As noted on the game’s website, the story of Dead Space revolves around “the dark secrets behind the events aboard the USG Ishimura through the final logs of the ill-fated crew and your encounters with the few survivors that remain.” The new version of the game, available on PlayStation 5, Xbox Series X/S, and PC, is a remake of the classic version with what the developer calls “jaw-dropping visual fidelity, suspenseful atmospheric audio, and improvements to gameplay.”

“Dead Space is a classic that changed how horror games were perceived when it was released,” said lead senior experience designer Christian Cimon in a statement included in the post. “[It] made sense to revive that game and share it with a whole new generation. But the game came out 15 years ago, when accessibility features were less common. Things like subtitles, menu narration, control-remapping, and the like are pretty much expected now [by the disability community], so we wanted to make sure the remake aligns with today’s highest standards.”

EA notes Motive has made Dead Space more accessible and inclusive by building in a number of “customization options with some fine-grained control.” Amongst many others, they include colorblind settings, control customization, and aim assistance. There’s also the ability to have screen reader-like narration of menus, as well as options to reduce motion effects, enable subtitles for dialogue, and display content warnings in anticipation of more gruesome moments.

There’s a video demoing accessibility in Dead Space on its YouTube channel.

All told, Motive is acutely aware that supporting accessibility is an evergreen endeavor that never finishes. The company is committed to making Dead Space even more inclusive going forward, with Cimon astutely noting the inclusivity ultimately benefits gamers yet also helps the business too. Accessibility features, he said, help the game feel more accessible and approachable by making it appealing to the widest possible swath of potential players. Ergo, more players means more business for the development studio to pour into future innovations.

As the axiom goes, a rising tide lifts all boats.

“[Working on accessibility is] about addressing and removing barriers that come between our players and games,” said EA’s program lead for game accessibility Morgan Baker in the post. “Accessibility improves experiences for people of all abilities and backgrounds, allowing for better products and ensuring that more players can have an enjoyable experience. And the work done by the Dead Space team shows that increasing accessibility continues to be a priority for us.”

For Baker, it’s heartening to see Motive so committed to accessibility.

“It’s so motivating to see a studio like Motive so invested in providing players more choices around how they consume horror content,” Baker said. “It’s inspiring. And we hope to see more studios consider the same. Because ultimately, when we can all play games, we all win.”

Just a few days ago we got some detailed pricing info for the Galaxy S23 series in Germany and Spain, WinFuture is here with some more finalized sums for the German market.

A closer comparison to the S22 series pricing reveals Samsung will be charging a €100 premium on the entry-level S23 and S23+ models. The base model S23 Ultra gets €50 price increase though the new model should arrive with 256GB storage instead of 128GB on its predecessor. The top-dog 12/512GB Galaxy S23 will be a cool €130 costlier this time around. Pre-orders from Samsung.com are expected to get the storage upgrade promos.