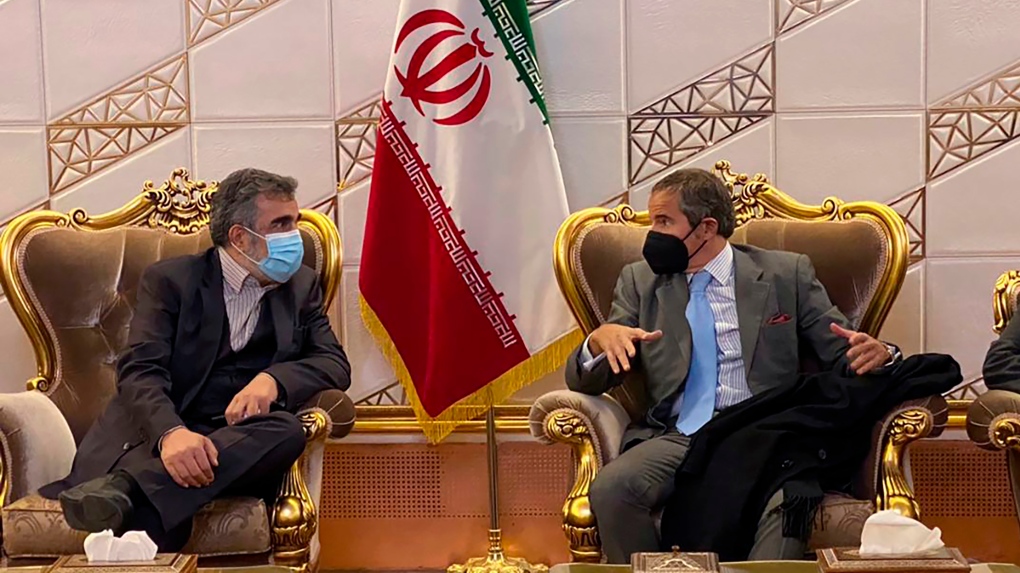 Iran on Saturday began construction on a new nuclear power plant in the country’s southwest, Iranian state TV announced, amid tensions with the U.S. over sweeping sanctions imposed after Washington pulled out of the Islamic Republic’s nuclear deal with world powers.

The announcement also comes as Iran has been rocked by nationwide anti-government protests that began after the death of a young woman in police custody and have challenged the country’s theocratic government.

The new 300-megawatt plant, known as Karoon, will take eight years to build and cost around $2 billion, the country’s state television and radio agency reported. The plant will be located in Iran’s oil-rich Khuzestan province, near its western border with Iraq, it said.

Iran has one nuclear power plant at its southern port of Bushehr that went online in 2011 with help from Russia, but also several underground nuclear facilities.

The announcement of Karoon’s construction came less than two weeks after Iran said it had begun producing enriched uranium at 60% purity at the country’s underground Fordo nuclear facility. The move is seen as a significant addition to the country’s nuclear program.

Enrichment to 60% purity is one short, technical step away from weapons-grade levels of 90%. Non-proliferation experts have warned in recent months that Iran now has enough 60%-enriched uranium to reprocess into fuel for at least one nuclear bomb.

The move was condemned by Germany, France and Britain, the three Western European nations that remain in the Iran nuclear deal. Recent attempts to revive Iran’s 2015 nuclear deal, which eased sanctions on Iran in exchange for curbs on its nuclear program, have stalled.

Since September, Iran has been roiled by nationwide protests that have come to mark one of the greatest challenges to its theocracy since the chaotic years after its 1979 Islamic Revolution. The protests were sparked when Mahsa Amini, 22, died in custody on Sept. 16, three days after her arrest by Iran’s morality police for violating the Islamic Republic’s strict dress code for women. Iran’s government insists Amini was not mistreated, but her family says her body showed bruises and other signs of beating after she was detained

In a statement issued by Iran’s state-run IRNA news agency on Saturday, the country’s national security council announced that some 200 people have been killed during the protests, the body’s first official word on the casualties. Last week, Iranian Gen. Amir Ali Hajizadeh tallied the death toll at more than 300.

The contradictory tolls are lower than the toll reported by Human Rights Activists in Iran, a U.S.-based organization that has been closely monitoring the protest since the outbreak. In its most recent update, the group says that 469 people have been killed and 18,210 others detained in the protests and the violent security force crackdown that followed.

Iranian state media also announced Saturday that the family home of Elnaz Rekabi, an Iranian female rock climber who competed abroad with her hair untied, had been demolished. Iran’s official judiciary news agency, Mizan, said the destruction of her brother’s home was due to its “unauthorized construction and use of land” and that demolition took place months before Rekabi competed. Antigovernment activists say it was a targeted demolition.

Rekabi became a symbol of the antigovernment movement in October after competing in a rock climbing competition in South Korea without wearing a mandatory headscarf required of female athletes from the Islamic Republic. In an Instagram post the following day, Rekabi described her not wearing a hijab as “unintentional,” however it remains unclear whether she wrote the post or what condition she was in at the time.

Separately, the U.S. Navy said Saturday it intercepted a fishing vessel in the Gulf of Oman on Thursday attempting to smuggle 50 tons of ammunition and a key component for missiles from Iran to Yemen.

Experts have accused the Iranian government of continually conducting Illicit weapons smuggling operations to supply Yemen’s Houthi rebels. The shipments have included rifles, rocket-propelled grenades and missiles. Last month, the U.S. seized 70 tons of a missile fuel component hidden among fertilizer bags aboard a ship bound for Yemen from Iran.

There was no immediate comment from Iran on the seizure.

Iran has been the Houthis’ major backer since the rebel force swept down from Yemen’s northern mountains in 2014 and seized the capital, Sanaa, forcing the internationally recognized government into exile. In the following year, a Saudi-led coalition armed with U.S. weaponry and intelligence intervened to try to restore the internationally recognized government to power. Since 2014, the United Nations has enforced an arms embargo prohibiting weapons transfers to the Houthis.

The United States unilaterally pulled out of the Iran nuclear deal — formally known as the Joint Comprehensive Plan of Action, or JCPOA — in 2018, under then-President Donald Trump. It reimposed sanctions on Iran, prompting Tehran to start backing away from the deal’s terms. Iran has long denied ever seeking nuclear weapons, insisting its nuclear program is peaceful.

Spotify Wrapped is a social media sensation. Its impact on artists and listeners is debatable

I’m a parent with an active social media brand: Here’s what you need to check on your child’s social media right now  CNN

Have you ever found yourself scrolling through social media and noticed you felt a bit down? Maybe a little envious? Why aren’t you on a yacht? Running a startup? Looking amazing 24/7?

The good news is you are not alone. Although social media has some benefits, it can also make us feel a little depressed.

Why does social media make us feel bad?

As humans we inherently compare ourselves to others to determine our self-worth. Psychologists call this social comparison theory.

Upward comparisons occur when we compare ourselves to someone else (in real life or on social media) and feel they are better than us (an unfavourable comparison for us) in whatever domain we are assessing (such as status, beauty, abilities, success, and so on).

For example, comparing your day at work to your friend’s post from the ski fields (we’re looking at you Dave!) is likely to be an upward comparison. Another example is making appearance comparisons which can make you feel worse about yourself or your looks .

Although upward comparison can sometimes motivate you to do better, this depends on the change being achievable and on your esteem. Research suggests upward comparisons may be particularly damaging if you have low self-esteem.

In contrast, downward comparisons occur when we view ourselves more favourably than the other person – for example, by comparing yourself to someone less fortunate. Downward comparisons make us feel better about ourselves but are rare in social media because people don’t tend to post about the mundane realities of life.

Social media showcases the best of people’s lives. It presents a carefully curated version of reality and presents it as fact. Sometimes, as with influencers, this is intentional but often it is unconscious bias. We are just naturally more likely to post when we are happy, on holiday or to share successes – and even then we choose the best version to share.

That’s not to say social media is all bad. It can help people feel supported, connected, and get information. So don’t throw the baby out with the bathwater. Instead, keep your social media use in check with these tips.

Concrete ways you can make yourself feel better about social media

Monitor your reactions. If social media is enjoyable, you may not need to change anything – but if it’s making you exhausted, depressed or anxious, or you are losing time to mindless scrolling, it’s time for change.

Avoid comparisons. Remind yourself that comparing your reality with a selected moment on social media is an unrealistic benchmark. This is especially the case with high-profile accounts who are paid to create perfect content.

Be selective. If you must compare, search for downward comparisons (with those who are worse off) or more equal comparisons to help you feel better. This might include unfollowing celebrities, focusing on real posts by friends, or using reality focused platforms like BeReal.

Redefine success. Influencers and celebrities make luxury seem like the norm. Most people don’t live in pristine homes and sip barista-made coffee in white sheets looking perfect. Consider what real success means to you and measure yourself against that instead.

Practise gratitude. Remind yourself of things that are great in your life, and celebrate your accomplishments (big and small!). Create a “happy me” folder of your favourite life moments, pics with friends, and great pictures of yourself, and look at this if you find yourself falling into the comparison trap.

Unplug. If needed, take a break, or cut down. Avoid mindless scrolling by moving tempting apps to the last page of your phone or use in-built focus features on your device. Alternatively, use an app to temporarily block yourself from social media.

Engage in real life. Sometimes social media makes people notice what is missing in their own lives, which can encourage growth. Get out with friends, start a new hobby, embrace life away from the screen.

Get amongst nature. Nature has health and mood benefits that combat screen time.

Be the change. Avoid only sharing the picture-perfect version of your life and share (in a safe setting) your real life. You’d be surprised how this will resonate with others. This will help you and them feel better.

Seek help. If you are feeling depressed or anxious over a period of time, get support. Talk to your friends, family or a GP about how you are feeling. Alternatively contact one of the support lines like Lifeline, Kids Helpline, or 13Yarn.