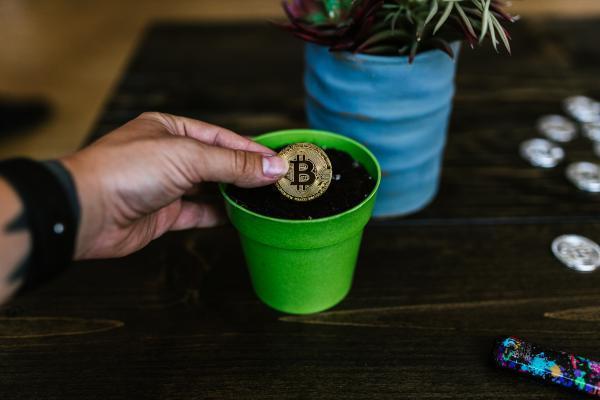 You got to know when to HODL ’em, and know when to fold ’em.
If you’re a crypto investor or a fan of long-term holdings, then the strategy may already be part of your process. With cannabis awaiting federal legalization in the U.S. and further market maturation overall, some believe hodling is the way to enter the nascent market.
As is with most strategies, nothing is perfect for every investor.

HODL dates back to 2013 and a drunken forum post discussing Bitcoin (CRYPTO: BTC) prices, namely BTC’s 39% decline in January.
Rather than bail on the plummeting coin, user GameKyuubi stuck with the stock.
He wrote, “WHY AM I HOLDING? I’LL TELL YOU WHY,” adding, “It’s because I’m a bad trader and I KNOW I’M A BAD TRADER.”
He emphasized the importance of holding in a bear market, a belief now championed by many in the crypto space concerning undervalued coins. September analysis from CryptoBuyer reported that 68% of altcoin buyers are hodling for the long haul.
Mark Lozzi, CEO of cannabis industry B2B and B2C platform Confia, said that “HODLing generally helps investors mitigate against short term volatility and downward market pressure, often resulting in hasty decisions that are by and large against your fundamental investment thesis.”
In crypto or otherwise, sources say hodling success is based on successful execution.
Lozzi noted that crypto assets are at risk of failing, leaving the investor to choose wisely before deciding to hodl. “It is still very important that a HODLER choose the right crypto assets that will endure the digital test of time,” he added.
Shaun Heng, VP of operations at CoinMarketCap, said crypto could be a substantial revenue stream for an investor when done correctly.
“By done right, I mean, you hodled for at least five years,” he said. “Hodling six months doesn’t count.”
Heng said the model works if someone is looking for an investment that won’t require much time. Though, he added, “It can definitely be a challenge to see massive fluctuations in your net worth, even if it trends upwards.”
Stefan Ateljevic, a crypto entrepreneur and founder of the review and information website Crypto Blokes, endorses the strategy but notes it isn’t for everyone.
“The price of crypto tends to be volatile and changes on a daily basis,” Ateljevic noted, adding that a good hodler is a stubborn investor who buys on the dip and remains committed to cashing out in the future for more significant returns.
Ateljevic didn’t always practice this investment methodology. Eight years ago, he invested in Bitcoin but didn’t hold the first time around. He told Benzinga that he “pretty much panic sold a good chunk when it was less than $10,000 per coin.”

To his good luck, he was mining Ethereum (CRYPTO: ETH) from day one.

Discussing potential coins worth considering, Ateljevic said, “Hodling for five years could see that give you massive returns on your investment.”

As in crypto, cannabis investors may want to consider hodling if a long-term investment strategy suits their strategy.
Lozzi said a hodl-type strategy could pay off in sectors like genetics and brands though he isn’t as sure about cultivation, which could see commoditization and low-cost producers leading the pack. He noted that the best bet for seeing an eventual ROI in cannabis is investing in leading names, innovators and market share players. “The returns will come,” he said.
Investors often draw parallels between cannabis and crypto. However, Heng cautions that the two emerging spaces are not as similar as some assume.
“On the bullish side for cannabis, it’s an industry that still doesn’t have lots of established players, meaning there is room for competitors,” he said.
Heng then countered his point. “Nevertheless, Bitcoin is a deflationary digital currency, which is something the world hadn’t seen before.” As such, he sees Bitcoin’s market potential reaching heights that cannabis won’t.

Photo by RODNAE Productions from Pexels

“ZMMK provides a solution for investors looking for a liquidity sleeve, or a place to hold their cash as they assess the market for other investments,” Mark Raes, head of Product at BMO Global Asset Management, said in a statement.

Meanwhile, CIBC has again expanded its lineup of Canadian Depositary Receipts (CDRs), which offer an affordable way to invest in some of the world’s largest companies with a built-in notional currency hedge, with eight new listings on the NEO Exchange.

The new CDRs include:

They join 10 other CDRs that were launched on NEO in July and October. According to NEO, the average number of client trades in CDRs grew from around 700 per day in September to roughly 5,500 since the start of November. The CDRs on the exchange have also continued to track their underlying stocks precisely even during highly volatile periods.

“We are pleased with the reception we’ve seen so far for CDRs with Canadian investors. It’s clear this meets a need in the market,” said Elliott Scherer, managing director and head of Sales, Wealth Solutions Group, CIBC Capital Markets. “This expansion of our CDR offering provides greater opportunity for investors to diversify their portfolio without being exposed to currency risk at a fraction of the price per share.”

Canada‘s main stock index rebounded on Thursday from a seven-week low hit in the previous session, with financials contributing to broad-based gains as major lenders boosted their dividends.

Wall Street also rallied as market participants snapped up bargains while digesting the implications of a shifting pandemic. The Omicron variant has spooked investors for about a week.

“The market is awaiting confirmation on the severity of the new COVID-19 variant, the degree to which it escapes existing vaccines, and how infectious it is given this will likely dictate the global response in terms of restrictions,” said Russ Mould, investment director at AJ Bell.

Financials, which account for about 30% of the Toronto market’s value, gained 2.2%. Toronto-Dominion Bank and Canadian Imperial Bank of Commerce joined rivals in announcing higher dividends and share repurchases.

TD rose 4.9%, while CIBC ended down 2.8% after missing profit estimates as costs climbed.

Canadian Prime Minister Justin Trudeau’s government will outline limited new spending in a fiscal update to be released later this month, a source said, as inflation soars and some business groups and opposition politicians call for restraint.

The growth of online virtual worlds will help advance the mainstream adoption of cryptocurrencies for payment transactions but it won’t be a game-changer, according to Frédéric Chesnais, chief executive of French fintech company Crypto Blockchain Industries.

In blockchain-based 3D virtual worlds, often referred to as metaverses, users can purchase and trade virtual assets and services using cryptocurrencies. Some analysts have argued the growing popularity of metaverses will drive an explosion in digital tokens.

“I think it will be important but I don’t think this is the key turning point,” Chesnais, who was until earlier this year the CEO of videogame company Atari told a Reuters NEXT panel on Thursday.

Interest in the metaverse exploded after Facebook said in October it was changing its name to Meta and would be focusing on building its own virtual world. Other big companies and smaller fintechs are also rushing to develop digital worlds.

Chesnais said that the mainstream adoption of cryptocurrencies will be driven by the more than one billion people globally who do not have access to a bank account because they may not have an address or an official identity.

“The only way for these people to have access to a better way of life and be part of the economic system is to have a wallet and to be paid in cryptocurrency,” he said.

“This is the most important moment for crypto.”

On Wednesday, Yat Siu, the chairman and co-founder Animoca Brands — which invests in and builds various virtual worlds — cautioned that while digital assets are set to grow as virtual worlds become more popular, investors in these technologies will face “bumps in the road” as the technologies mature.