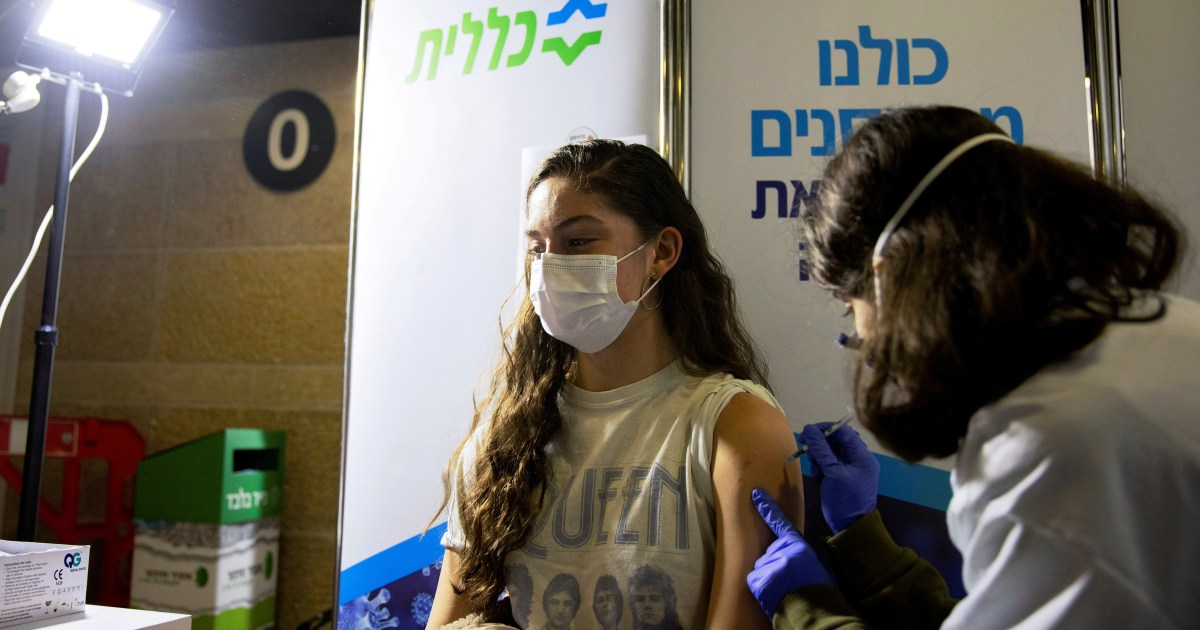 West Jerusalem, Israel – In the 32C (89.6F) heat of an Israeli summer, parents and children waited – some patiently and some less so – in a line outside a testing station for their children’s turn to receive the newly approved Sofia COVID-19 test.

Some had plans to go to a water park, others to a museum, and others just out to eat. But the children, aged three to 12, needed to get a coronavirus test first to do so.

As of August 20, “Green Passes” are required to enter restaurants, public pools, museums or any other public place besides parks. The pass is issued to people who have received two vaccine doses or who have recovered from coronavirus. But unlike in the past, children who are not eligible to get vaccinated must have the pass, too.

“It’s hard,” said Shira Elkin, who winced when she had to pin down her frightened and crying four-year-old to allow the medic to take a swab sample from inside her nose. “But I understand that it’s important and I’m ready to make the effort.”

The results of the fast tests come in 15 minutes, but they are only good for 24 hours and some parents have found themselves waiting in line for more than an hour and doing so for consecutive days since the requirement went into effect.

“If they make us do this every day, I’ll pull my hair out,” said Tamar Cohen, who waited with her husband and two young daughters. “It’s ridiculous. We can’t wait in line every day.”

The requirement is the latest – and the most draconian – move in the Israeli government’s battle against the Delta variant, which has hit Israel hard. The fast spread of the variant caught Israelis by surprise.

Israel was one of the first countries to vaccinate the majority of its population and by March most Israelis were already putting COVID-19 behind them.

By June the mandatory mask requirement was completely dropped and the only restrictions that remained concerned the entry and exit from the country. Now the rate of infection has risen to 5.4 percent and Prime Minister Naftali Bennett has said he will take every action possible to lower the rate and avoid going to a fourth lockdown.

Health experts say there are two main reasons the Delta variant hit Israel so hard. For one, Israelis were flouting the mask requirements, which were re-imposed at the end of June. Now police are handing out fines to those who do not wear a face covering.

The other reason given for the high rate of infection is that most Israelis were vaccinated with the Pfizer vaccine, which data shows is less effective than the Moderna jab against the virus.

“It’s true that Moderna has better protected people from infection, but the two vaccines are almost equivalent in effectiveness against severe disease,” said Professor Cyril Cohen, vice dean of life sciences at Bar Ilan university and a member of the health ministry’s coronavirus vaccine advisory board.

“This is important so that our hospitals won’t be overwhelmed.”

In addition to requiring testing for children and anyone not fully vaccinated, Israel will require all teachers to have a Green Pass to work. Israel has also imposed stricter guidelines regarding entry into the country.

Foreigners are not allowed to enter without receiving a special permit and taking numerous tests. Israelis are not allowed to fly to “red countries”, such as Spain, Brazil and Mexico without a permit from a special committee. Those already in red countries, as well as Israelis in “orange” countries, such as the US, France and Germany, must go into quarantine upon return to Israel, even if they were vaccinated.

Moreover, the country began offering a booster vaccine for residents aged 60 and above – even before the government approved it. Since then Israel has approved giving the booster to everyone aged 40 and above.

“If you were to ask me two months ago when we had only 100 cases a day, I would have said we don’t need to go with a booster,” said Professor Cohen.

“But in the meantime, we moved from 100 cases a day to 8,000 cases a day and I won’t be surprised if in a couple more days we see more than 10,000. We had no choice but to give a booster shot. I would have preferred more data, but I think we made the right call.”

More than 1.3 million Israelis out of a population of 9.3 million have received three doses of Pfizer so far, but there have been “breakthroughs”: some people have become infected with coronavirus despite having received three shots.

The third jab has raised ethical concerns. Tedros Adhanom Ghebreyesus, the director-general of the World Health Organization, has urged rich countries, including Israel, to send the doses to poor countries that cannot provide even a first vaccine to their citizens.

In neighbouring occupied Palestine, only 9.2 percent of the population has been fully vaccinated, while in Israel 60.1 percent has received at least two jabs.

In an opinion piece in the Haaretz daily, Dr Zohar Lederman, an Israeli bioethicist and an intern in the Corona Emergency Room at Rambam Hospital, suggested Israelis solve the moral dilemma by donating $5, the price of one vaccine, to gavi.org. “The process takes exactly one minute, and it may save a life,” he wrote.

Meanwhile, about one million eligible Israelis aged 12 and above have not been vaccinated even once. People who oppose vaccinations in the country are vocal and sometimes violently so.

“Someone called me Hitler today on social media,” said Professor Cohen, who posts videos to try to explain what is happening in Israel and to convince Israelis to get vaccinated.

One person opposed to coronavirus vaccines told him “we will all die because we got vaccinated and now we won’t have to fight to take our land because we will all be dead and the country will be served to the Palestinians on a platter”, Cohen recounted.

VANCOUVER — Wine lovers have growing options on the shelf to enjoy their favourite beverage as producers in B.C. offer smaller container sizes.

Multiple British Columbia wineries over the last several years have begun offering their product in smaller, single-serve cans and bottles.

Along with making wine more attractive to those looking to toss some in a backpack or sip on the golf course, the petite containers leave wineries with options for a potential shift in mindset as Canadians discuss the health benefits of reducing alcohol consumption.

Vancouver-based wine consultant Kurtis Kolt said he’s watched the segment of the wine industry offering smaller bottles and cans “explode” over the last several years, particularly during the COVID-19 pandemic when people were meeting outdoors in parks and beaches and looking for something more portable to take with them.

“You’re not taking a hit on quality, you know? In fact, if someone is only going to be having a glass or two, you’re cracking a can and it’s completely fresh, guaranteed,” he said.

It’s also an advantage for people who want to drink less, he said.

“It’s much less of a commitment to crack open a can or a small bottle or a smaller vessel than it is to open a bottle,” he said.

“Then you have to decide how quickly you’re going to go through it or end up dumping some out if you don’t finish it.”

Last month, the Canadian Centre on Substance Use and Addiction released a report funded by Health Canada saying no amount of alcohol is safe and those who consume up to two standard drinks per week face a low health risk.

Health Canada has said it is reviewing the report.

Charlie Baessler, the managing partner at Corcelettes Estate Winery in the southern Interior, said his winery’s Santé en Cannette sparkling wine in a can was released in 2020 as a reduced alcohol, reduced sugar, low-calorie option.

“We’ve kind of gone above and beyond to attract a bit of a younger, millennial-type market segment with a fun design concept of the can and sparkling, low alcohol — all these things that have been recently a big item on the news,” he said.

Santé en Cannette is a nine per cent wine and reducing the alcohol was a way to reduce its calories, he said. The can also makes it attractive for events like a picnic or golf, is recyclable, and makes it easier for restaurants that might want to offer sparkling wine by the glass without opening an entire bottle.

“So the health is clearly one incentive, but I think more importantly, so was being able to enjoy a locally made product of B.C. from a boutique winery, dare I say, with a mimosa at 11 o’clock and not ruin your day,” he said.

Baessler said the winery has doubled production since the product was first released to about 30,000 cans a year, which they expect to match this year.

He said there’s naturally a market for the product but he doesn’t expect it to compete with the higher-alcohol wine.

“So this isn’t our Holy Grail. This is something that we do for fun and we’ll never compete, or never distract, from what is our core line of riper, higher-alcohol wine,” he said.

Jeff Guignard, executive director of B.C.’s Alliance of Beverage Licensees, which represents bars, pubs and private liquor stores, said the industry has seen a shift in consumers wanting options that are more convenient.

“It’s not a massive change in consumer behaviour but it is a definitely a noticeable one, which is why you see big companies responding to it,” he said.

Guignard said the latest CCSA report is creating an increased awareness and desire to become educated about responsible consumption choices, which is a good thing, but he adds it’s important for people to look at the relative risk of what they’re doing.

“If you’re eating fast food three meals a day, I don’t think having a beer or not is going to be the single most important determinant of your health,” he said.

“But from a consumer perspective, as consumer preferences change, of course beverage manufacturers respond with different packaging or different products, the same way you’ve seen in the last five years, a large number of low-alcohol or no-alcohol beverages being introduced to the market.”

“I don’t know if it’s reached its peak or if it will grow. I just expect it to be part of the market for now on.”

This report by The Canadian Press was first published Feb. 5, 2023.