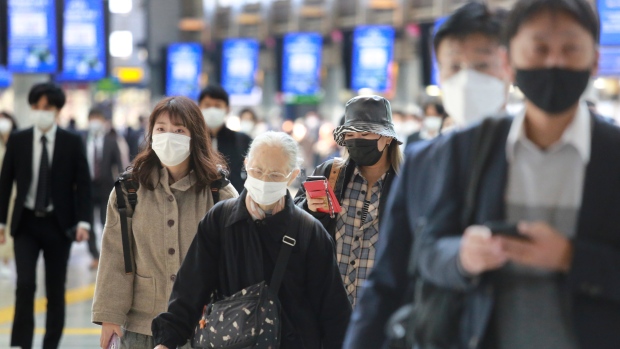 TOKYO —
Japan’s Cabinet approved on Friday a record 56 trillion yen (US$490 billion) stimulus package, including cash handouts and aid to ailing businesses, to help the economy out of the doldrums worsened by the coronavirus pandemic.

“The package has more than enough content and scale to deliver a sense of security and hope to the people,” Prime Minister Fumio Kishida told reporters in announcing the plan earlier in the day.

The proposal won Cabinet approval in the evening, according to the prime minister’s office. It still needs parliamentary approval. Kishida has promised speedy action, and parliament will convene next month, he said.

The plan includes doling out 100,000 yen ($880) each in monetary assistance to those 18 years or younger, and aid for businesses whose sales plummeted because of coronavirus measures.

Japan has never had a full lockdown during the pandemic and infections remained relatively low, with deaths related to COVID-19 at about 18,000 people.

Under the government’s “state of emergency,” some restaurants closed or limited their hours, and events and theatres restricted crowd sizes for social distancing. Apart from that, shortage of computer chips and other auto parts produced in other Asian nations that had severe outbreaks and strict lockdowns has hurt production at Japan’s automakers, including Toyota Motor Corp., an economic mainstay.

The world’s third largest economy was already stagnating before the pandemic hit. So while the U.S. and many other countries are looking for ways to cut back on emergency support for their economies and tamp down inflation, Japan is looking for ways to rev its idling engines.

The government has been studying restarting its “GoTo Travel” campaign of discounts at restaurants and stores, which is designed to encourage domestic travel. The campaign, which began last year, was discontinued when COVID cases started to surge.

Some critics have said the government approach amounts to “baramaki,” or “spreading out handouts,” and will prove ineffective in generating growth in the long run. Others say the proposed cash aid leaves out families without children and other poor.

The scale of the latest package also will push Japan’s debt higher since it will be financed by issuing bonds.

Japan’s economy contracted at an annual rate of 3% in the July-September period, largely because of weak consumer spending. Analysts say the economy is unlikely to rebound until next year.

Japan has also promised to earmark spending for vaccine research after facing criticism over being dependent on imports for coronavirus vaccines. It has so far approved vaccines from Pfizer, Moderna and AstraZeneca.

Kishida, who has promised “a new capitalism” for Japan, took office in October. In September, he became the head of the ruling party, replacing his predecessor Yoshihide Suga, who stepped down after just a year in office, largely because of widespread public discontent about his inept response to the pandemic.

“We want to support those people who are suffering because of the coronavirus, while steering our nation’s sorely damaged economy back to health,” Kishida said.

Economy of Belarus: Between Western Sanctions and Union With Russia – Valdai Discussion Club

British Columbia’s economic growth is expected to outpace Canada’s in 2021 and 2022, according to projections from the Economic Forecast Council (EFC).

Each year, B.C.’s finance minister meets with the 13-member council of private-sector forecasters as part of preparation for the next year’s budget. This year an additional set of discussions was added, providing an opportunity to consult with a new Environmental, Social, Governance (ESG) Advisory Council to further explore how the provincial government can continue to build resilience and support well-being in British Columbia.

Private-sector forecasters anticipate that, despite the pandemic, the province’s economy will grow by 5.3% in 2021 and 4.2% in 2022, which is above the respective national GDP estimates of 4.9% and 4.1%. Although B.C.’s economy contracted in 2020 due to impacts from the COVID-19 pandemic, B.C. was among provincial leaders last year and the economy’s 3.4% decline was smaller than originally projected.

“Momentum from our strong recovery and increasing vaccination rates over the last few months has helped put B.C. on a good path for future economic growth,” said Selina Robinson, Minister of Finance. “There are more challenges ahead, but forecasts signal the work we have done so far has put us on the right track and provided us with a solid foundation to continue responding to the pandemic and recent flooding and support a strong recovery for British Columbians.”

Discussions with the EFC and the ESG Advisory Council focused on current events, issues affecting B.C.’s economy and the environmental, social and governance opportunities and challenges facing the province. Key topics at the meetings:

“As we look to our recovery, we are aligning our investments with our priorities to ensure that while we grow our economic resilience, we are also making progress on addressing climate change, reducing poverty and inequality, and advancing reconciliation with Indigenous Peoples,” Robinson said. “Following the incredible hardship our province has faced with this year’s floods and fires during a pandemic, it’s never been more important for us to share ideas about building resilience and sustainability.”

Several forecasters noted that the provincial government’s commitments to addressing climate change, its 10-year housing plan, record levels of capital investment and continued work to diversify the economy, have helped to insulate the province from some economic impacts and position the province well for longer-term sustainable growth.

Forecasts and feedback from the two councils will be used to inform the next provincial budget, which will be released on Feb. 22, 2022. EFC members will also have an opportunity to submit revised forecasts in early January.

The Canadian dollar weakened against its U.S. counterpart on Friday as investors took advantage of a jump in the currency after stronger-than-expected domestic jobs data to add to bearish bets, with the loonie extending this week’s decline.

“We have seen a swift move lower in risk appetite ever since the stock market opened,” said Erik Bregar, an independent FX analyst. “The spike higher (in the loonie) this morning, it was a nice move to fade and keep riding the trend down.”

Wall Street‘s major indexes fell as investors grappled with a disappointing U.S. jobs gain and uncertainty around the potential impact of the Omicron coronavirus variant, while the price of oil, one of Canada‘s major exports, settled 0.4% lower at $66.26 a barrel.

Canada‘s economy posted a job gain of 154,000 in November, eclipsing estimates for an increase of 35,000, while the jobless rate dropped to a new pandemic low.

Economists say the data is unlikely to change the Bank of Canada‘s guidance at a policy announcement next week amid worries over the new variant and after massive recent flooding in British Columbia that has hampered trade through Vancouver.

Still, analysts are sticking with bullish forecasts on the Canadian dollar, expecting oil prices to rebound and the Bank of Canada to hike interest rates before the U.S. Federal Reserve, a Reuters poll showed.

Canadian government bond yields were mixed across a flatter curve.

B.C. adds 4,600 jobs in November as economy braces for effects of flood disaster – Business in Vancouver