A jury was expected to be impaneled on Wednesday in the murder trial of three white men who chased and fatally shot Ahmaud Arbery, a young Black man who went for a Sunday afternoon run in a mostly white neighborhood in Georgia’s Glynn County last year.

Questioning scores of potential jurors has taken more than two weeks since the trial opened in Glynn County Superior Court in the small coastal town of Brunswick on Oct. 18.

The process has been slowed by an issue common in high-profile cases that come with widely seen video of the encounter: many potential jurors, drawn from the county, have told the court that they had already seen the viral video of Arbery’s death and had made their minds up as to the guilt of Gregory McMichael, his son Travis McMichael, and their neighbor William “Roddie” Bryan.

The three men have pleaded not guilty to charges including murder, assault and false imprisonment. In their defense, they have said they were trying to detain Arbery under the state’s citizen’s arrest law, since repealed after Bryan’s cellphone video of the killing sparked widespread outrage. They say they chased down the unarmed 25-year-old because they thought he was a “suspect” in a burglary.

Only about 85,000 people live in Glynn County, and many potential jurors have told the court they personally knew Arbery or know some or all of the defendants.

“This is the most complicated jury selection I’ve ever been a part of including federal death penalty cases,” Kevin Gough, a lawyer for Bryan, said on Wednesday as he tried to get a potential juror called back in for further questioning after discovering she had made dance videos on the TikTok social media app expressing her sadness at Arbery’s death.

Judge Timothy Walmsley has at times expressed impatience with the pace of jury selection. He allowed Gough to question the potential juror a second time, leading to her dismissal, before rebuffing a request by Gough to allow counsel an additional 60 minutes to confer on the remaining potential jurors.

“We are going to try and pick a jury this morning,” the judge said.

Coronavirus: Where is Omicron in Canada? – CTV News 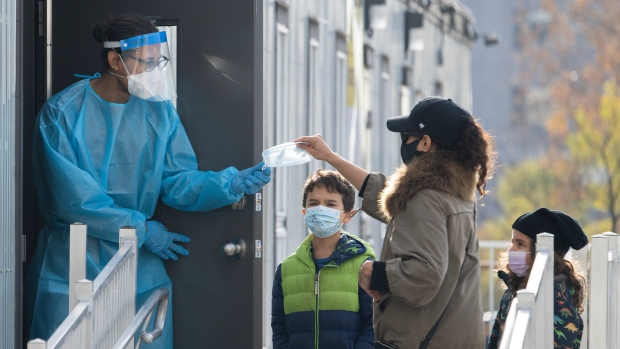 TORONTO —
The latest COVID-19 variant – dubbed “Omicron” – is spreading around the world, which has experts and governments on heightened alert.

While more research is needed to uncover just how transmissible and vaccine resistant the Omicron variant may be, researchers have raised concerns due to the more than 30 mutations to the spike proteins that cause infections in humans.

As of Tuesday afternoon, Canada has reported seven confirmed cases of the Omicron variant and has since banned travel into the country from a host of African nations, including South Africa, Nigeria and Egypt.

Here is where cases of the Omicron variant have been confirmed in Canada:

The individual lives in the Fraser Health region, which represents parts of B.C. south of Vancouver.

The patient had recently returned from Nigeria and is currently in isolation.

Alberta also reported its first case of the Omicron variant on Tuesday.

Dr. Deena Hinshaw, Alberta’s chief medical officer of health, told reporters that the person had returned from travelling in Nigeria and the Netherlands.

“The individual tested positive while asymptomatic and I can confirm the individual has not left quarantine since their arrival from international travel,” Hinshaw said.

Ontario has four confirmed cases of the Omicron variant, all four of whom are in Ottawa.

The first two Ottawa residents with Omicron, confirmed on Sunday, had travelled to Nigeria and arrived through Montreal’s Pierre Elliott Trudeau Airport. It is not clear how the other two cases had come in contact with the virus.

All four confirmed cases are self-isolating.

The province is also investigating two people in Hamilton who have tested positive for COVID-19 and have met the criteria for an Omicron infection, but are awaiting genomic sequencing results.

Quebec reported its first and only case of the Omicron variant on Monday.

The woman had recently travelled to Nigeria, but the province could not release any more details due to privacy concerns. The Canadian government announced this afternoon that several more countries have been added to the list of those currently subject to stricter border measures.

This is a developing story. CIC News will continue to update it once the Canadian government publishes official guidelines.

The countries added to the list are Nigeria, Egypt, and Malawi. As of today, foreign nationals who have travelled to these countries over the last 14 days will be forbidden from entering Canada. They join a list of seven southern African countries that had restrictive measures imposed on them this past Friday.

Canadian citizens and permanent residents that have been in any of these ten countries over the last 14 days will need to receive a negative PCR test before being allowed to travel to Canada. Upon arriving to Canada, they will face more testing and quarantine measures.

In addition, all air travellers (except those coming from the U.S.), irrespective of their Canadian immigration and vaccination status, will need to undergo testing at the airport in which they land in Canada. They will need to self isolate until a negative test has been confirmed. This is in addition to the PCR tests that they need to get within 72 hours of travel to Canada.

These new measures also apply to Canadian citizens and permanent residents, even those that are fully vaccinated. Canadian government ministers said during this afternoon’s press conference they will give further consideration to potentially adding these requirement to travellers entering Canada from the U.S. by air and/or land.

The stricter measures come after a new variant of COVID-19, Omicron, was discovered last week in South Africa and is causing concern around the world.

On November 26, two days following the discovery of the new variant, the Canadian government announced that foreign nationals who travelled to South Africa, Eswatini, Lesotho, Botswana, Zimbabwe, Mozambique and Namibia, would not be allowed to enter Canada.

The World Health Organization describes the Omicron variant of the coronavirus as “very high risk” globally and the likelihood of it spreading around the world as significant.

It is currently unknown how contagious the variant is, how dangerous or whether or not it is resistant to vaccines.

To date, five cases of the Omicron COVID-19 variant have been confirmed in Canada and several other possible cases are under investigation.

Mexico is renegotiating its Seasonal Agricultural Workers Program agreement with Ottawa. The agreement outlines Mexican migrant farmworkers’ rights and conditions of their employment in Canada. But this contract renewal is part of a larger rethink of the program that started last year, said Juan Gabriel Morales Morales, head of the consular section of Mexico’s embassy in Canada.

“Everything is on the table. … It’s overhauling completely the operation of the program,” he said.

It comes as migrant farmworkers in British Columbia are facing the second atmospheric river in as many weeks just months after record-setting heatwaves made bunkhouses unlivable and work treacherous or impossible.

Among the key issues Mexico hopes to tackle are eligibility for employment insurance, restrictive criteria for which have left some who cannot work because of flooding without pay, advocates say.

Mexico is also seeking an end to “early repatriation,” which Morales Morales said forces workers to return home even when they still need health care in Canada or when a contract ends early but they could find work elsewhere.

Many of these problems have been magnified by the coronavirus pandemic and natural disasters, Morales Morales said.

Migrant farmworkers are key to Canada‘s C$68.8 billion agricultural sector and account for about one-fifth of the country’s agricultural workforce, according to the Canadian Federation of Agriculture.

And some 60,000 migrant farmworkers – many from Central America and the Caribbean, although not all of them part of the Seasonal Agricultural Workers Program – come to Canada as part of an annual migration that ramps up in spring.

Canada‘s employment ministry did not immediately respond to a request for comment.

Mexico is not taking on one key demand from advocates, however: an end to the “closed” work contracts that tie migrants to one employer.

“When an agricultural worker comes to Canada, the person depends absolutely, completely on the employer. … If you’re having a problem, if the person is pushing you to work more than normal, you don’t have an option,” said Carlos Rojas, president of advocacy group Conseil Migrant.

Coronavirus: Where is Omicron in Canada? – CTV News