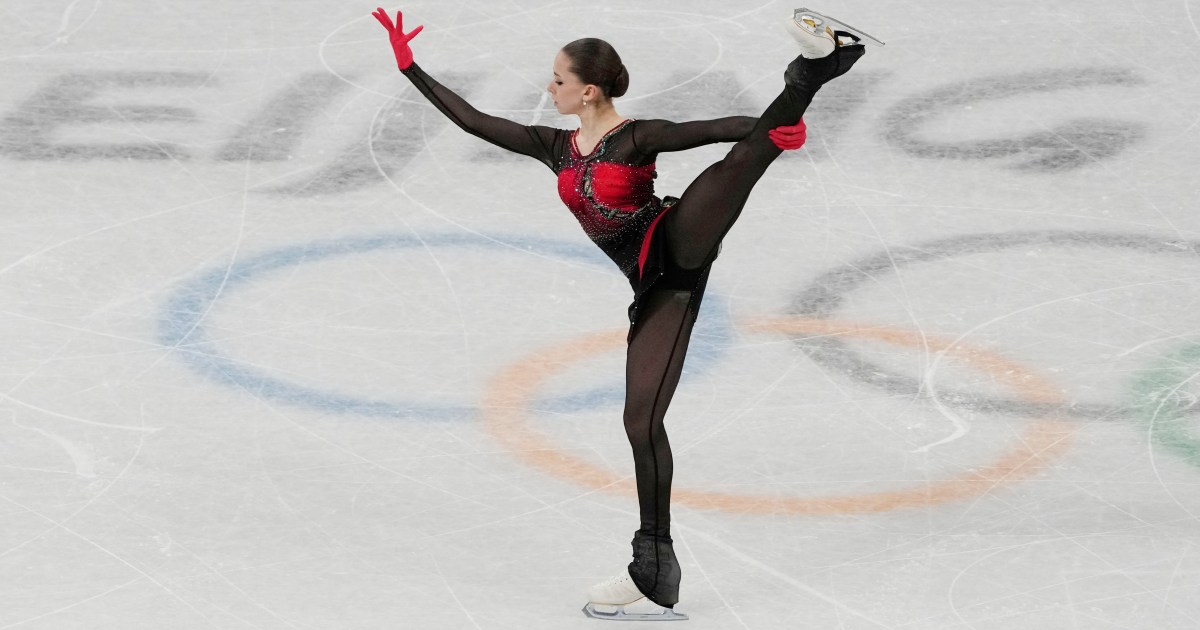 The reports, late on Wednesday, came after the International Olympic Committee (IOC) postponed a ceremony to present the 15-year-old skater and her teammates with their Olympic gold medals.

Newspapers RBC and Kommersant said Valieva tested positive for trimetazidine before she won the European championship in Estonia last month. The drug is banned by the World Anti-Doping Agency because it can increase blood flow efficiency and help endurance.

The alleged positive test could cost Russia the team gold and also threaten Valieva’s participation in the individual event that starts next week. The teenager is a strong favourite in the competition.

Mark Adams, the group’s spokesman, told reporters that an “active legal case” was under way concerning the medal ceremony and that claims of a failed drug test were “speculation”.

“We had a situation arise yesterday that has all sorts of implications,” he said. “I’m not … going to comment on a legal case because it wouldn’t be appropriate.”

The Russian Olympic Committee (ROC) also declined to comment on reports that Valieva had returned a positive test.

The teenager delivered one of the highlights of the Beijing Games so far when she landed the first quadruple jump by a woman in Olympic competition.

Any move to penalise Valieva or strip the team of their medals would probably cause a national outcry as figure skating is a prestige sport for Russia.

“The drug trimetazidine does not help an athlete in any way. At all. It was found in one single sample in December. A minuscule amount. Nothing in her samples before or since,” he wrote on social media.

“There is no doping in the conventional sense. No! This cardiac drug has no impact on … performance. Now leave Kamila in peace.”

Dr Sadiya Khan, a cardiologist and assistant professor at Northwestern University Feinberg School of Medicine, told Reuters news agency that in theory trimetazidine might be used in a healthy person to enhance blood flow above and beyond normal levels.

“The idea behind it would be, potentially, if you enhance blood flow, you could improve somebody’s ability to exercise longer or exercise more efficiently by allowing the heart to respond super-normally,” she said.

But she said it is not clear if the drug offers any performance-enhancing benefit.

“There’s a theoretical benefit,” she said. “There’s no strong evidence that it does make a difference.”

Former Russian pairs skater Tatiana Volosozhar, who won two gold medals at the 2014 Sochi Olympics, showed her solidarity with Valieva on social media, calling for the use of the Russian hashtag #Iwillneverbelieve to show support to the teenager.

If the Russian team is disqualified, the United States team would be elevated to the gold medal for the first time in the event. Japan would be awarded silver and fourth-place finisher Canada would receive the bronze.

Russian athletes are in Beijing competing as the “Russian Olympic Committee” after the country was banned because of a massive state-sponsored doping scheme at the 2014 Sochi Olympics.

Russia has acknowledged some shortcomings in its implementation of anti-doping rules but denies running a doping programme.

One of the social-media giant’s biggest concerns is language in the bill that prohibits “digital news intermediary operators” – a category that would apply to Google and other search engines – from giving “undue or unreasonable preference” to specific news items.

The company argues this language is unclear and puts at risk the core function of Google’s search engine, which is to provide ranked responses to a search query. – Sean Kilpatrick, The Canadian Press

Filmmaker, musician, broadcast executive, artistic director, television and radio show host. There aren’t too many occupations in media that American-born, Montreal resident Matt Zimbel hasn’t put his mind to–and succeeded at. The Manteca bongoist has just launched the 2nd season of his satirical Yes We Can–Ada podcast series (10 episodes all in) that is spreading like wildfire on the TikTok channel. Oh, and let’s not forget Matt’s subtitle for his irreverent humour: The Progressive Guide to Getting the Fu*k Out. For your titillation and affected northern self-love, episode 1: Pandemic Nervosa.

Alexisonfire kicks off a new “multi-year” partnership between Live Nation and SiriusXM in Canada with a free concert at Live Nation’s Toronto concert venue HISTORY on April 13. The concert precedes the band’s 4-day concert series, Born & Raised, in hometown St. Catharines with co-headliner City and Colour. Other collaborative concerts are to be broadcast by SiriusXM from RBC Echo Beach and Budweiser Stage and several festivals, including Born & Raised, FVDED in the Park and Osheaga. Both companies are under the umbrella of US mass media giant Liberty Media, which owns 34 percent of Live Nation and 72 percent of SiriusXM.

How media reports of ‘clashes’ mislead Americans about Israeli-Palestinian violence

The New York Times initially reported that Abu Akleh “was shot as clashes between the Israeli military and Palestinian gunmen took place in the city.” Further down in the same story, we read that Palestinian journalist Ali Samudi, who was wounded in the same attack, said, “There were no armed Palestinians or resistance or even civilians in the area.” Yet this perspective is missing from the headline and opening paragraphs of the story.

A few days later, an analysis of available video footage by investigative journalism outlet Bellingcat concluded that the evidence “appears to support” eyewitnesses who said no militant activity was taking place and that the gunfire came from Israeli military snipers.

The New York Times has not updated or corrected its original story to reflect this new evidence. – Maha Nassar, The Conversation

The 18-year-old gunman broadcast the shooting in a grocery store in a predominately Black suburban area in Buffalo, New York, to the streaming platform Twitch on Saturday morning. Although Twitch took down the livestream within two minutes from the start of the attack, a recording of the video was swiftly posted on a video streaming site called Streamable. That video was viewed more than three million times before it was taken down, according to the New York Times. Links to the recording were shared across Facebook and Twitter, and another clip that purported to show the gunman firing at people in the supermarket was visible on Twitter more than four hours after being uploaded. Additionally, TikTok users uploaded video sharing accounts and search terms to take viewers to the full video on Twitter, according to Washington Post reporter Taylor Lorenz. – Rhiannon Williams, The Download

Stuffing your résumé and LinkedIn profile with generic buzzwords can be off-putting to potential employers, but it’s far worse when you recite them during an interview.

Below are some of the most commonly overused words candidates use to describe themselves during the interview process—and what you can say instead to communicate your value and win over your interviewers. – Amanda Augustine, Fast Company

A North York male has been arrested in connection with the largest fentanyl seizure in the history of the Guelph Police Service.

A seven-month investigation which began in early 2021 resulted in the seizure of more than 100,000 doses of fentanyl and four firearms. Several individuals were arrested last fall and others identified as persons of interest as the investigation continued.

On Tuesday, Guelph Police were notified by another police service that one of the males identified during that investigation had been arrested in the Greater Toronto Area and charged with drug offences. The male was transported to Guelph.

A 26-year-old North York male is charged in Guelph with three counts of trafficking in a controlled substance. He will appear in a Guelph bail court Thursday.

The Guelph Police Service is investigating after two motor vehicles were stolen on the same day.

Approximately 7:45 a.m. Wednesday, a male called police to report his 2013 Ford Fusion had been stolen overnight from his driveway in the area of Gordon Street and Hands Drive.  Another resident of the same street called police to report seeing a suspicious male checking car doors in the neighbourhood approximately 3 a.m. before getting into the passenger side of a vehicle which left at a high rate of speed.

Approximately 10 p.m. Wednesday, a female called to report her silver and grey 2004 Chevy Silverado pickup had been stolen from her workplace in the area of Paisley Road and Elmira Road South. It was stolen sometime since 12:30 p.m.

A Kitchener female who twice missed court dates in Guelph was held in custody to ensure she makes it the next time.

The female was scheduled to appear in April for theft under $5,000 and two counts of failing to appear. A warrant was taken out for her arrest after she failed to show up.

Early Thursday she was arrested by another police service and returned to Guelph. A 37-year-old Kitchener female faces an additional charge of failing to appear and was held to appear in a Guelph bail court Thursday.