Demonstrators blocked roads after the Lebanese pound fell lower. As poverty and hunger spreads, pressure is mounting on politicians to form a new government.

Demonstrators blocked roadways nationwide for the fifth day in a row on Saturday and armed forces rushed to occupy parts of the capital Beirut as anger builds over the country’s economic downturn.

The Lebanese currency tumbled to a new low on Tuesday, enraging a population already suffering from the country’s financial meltdown.

With the crisis worsening, caretaker Prime Minister Hassan Diab threatened to stop performing his duties in a bid to pressure politicians to forge a new Cabinet. 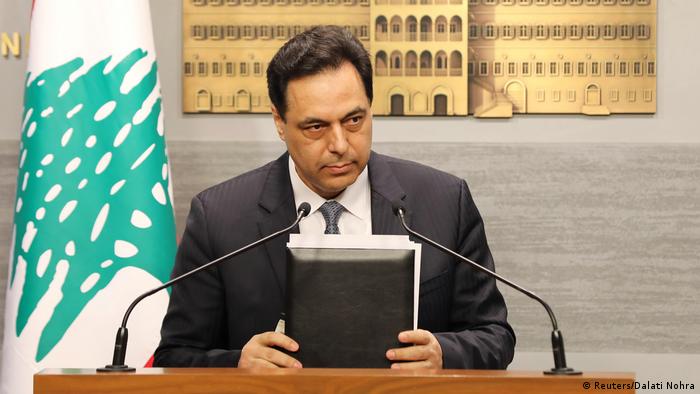 What did Diab say?

In his nationally televised speech on Saturday, Diab said he was prepared to suspend his caretaker duties “if it helps to form a government.”

“The country is confronted with enormous challenges that a normal government cannot face without political consensus,” said Diab. “So how can a caretaker government face these challenges?”

Diab warned Saturday against inaction and appealed to politicians to put aside differences and quickly form a new government that can attract desperately needed foreign assistance.

“What are you waiting for, more collapse? More suffering? Chaos?” Diab said, chiding senior politicians without naming them for continuing to debate over the future shape and size of the government.

“What will having one minister more or less [in the Cabinet] do if the entire country collapses,” he asked.

“Lebanon is in grave danger and the Lebanese are paying the price.”

What is happening to Lebanon’s economy?

Lebanon’s two year-long financial crisis shows no signs of ending as joblessness spreads along with hunger.

The collapse of the Lebanese pound, to 11,000 to the US dollar on Tuesday, was the last straw for citizens already suffering from steeply rising prices on consumer goods such as diapers and cereals.

The financial crash has also resulted in delays in the arrival of fuel shipments, leading to more extended power cuts around the country, which in some areas now are stretching more than 12 hours a day.

The crisis has driven nearly half the population of the small country of six million into poverty.

“Doesn’t the scramble for milk constitute a sufficient incentive to transcend formalities and roughen out the edges in order to form a government?” Diab said, referring to a recent Beirut supermarket incident in which shoppers fought over powdered milk.

The now viral video seemingly underscores the desperate state of the economy.

What can a new government do?

The nation has been drifting since August when Diab’s cabinet resigned following the massive Beirut port explosion that devastated much of the city.

Prime Minister-designate Saad al-Hariri was nominated in October but has failed to form a new Cabinet due to the political deadlock between him and President Michel Aoun.

Despite Lebanon’s need for foreign currency, international donors have said they will only help the country financially if major reforms are implemented to fight widespread corruption, which has brought the nation to the brink of bankruptcy.

A new Cabinet would be in a position to institute the necessary financial reforms.