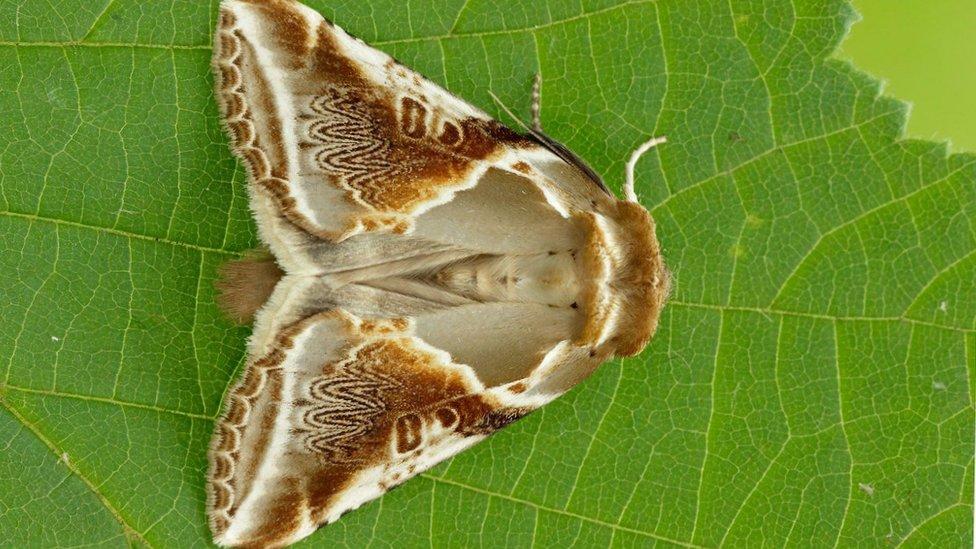 Scientists say light pollution may be contributing to “worrying” declines in insects seen in recent decades.

In a UK study, artificial street lights were found to disrupt the behaviour of nocturnal moths, reducing caterpillars numbers by half.

Modern LED streetlights appeared to have the biggest impact.

There is growing evidence that insect populations are shrinking due to the likes of climate change, habitat loss and pesticides.

Factors are complex and varied, including the steady loss of forests, heathlands, meadows and marshes, overuse of pesticides, climate change and pollution of rivers and lakes.

The use of artificial lights at night-time has been proposed as another driver of insect decline, although the scale remains unclear.

The researchers say their study, published in Science Advances, is the strongest evidence yet that light pollution can have detrimental impacts on local insect populations, with consequences for the birds and other wildlife that rely on caterpillars for food.

“In a local setting we can now be quite confident that light pollution is important, but what’s less clear is if we’re looking at a whole landscape,” said lead researcher Douglas Boyes of the charity, Butterfly Conservation.

“If insects are in trouble – as we believe they are, and have evidence to support that – perhaps we should be doing all we can to reduce these negative influences.”

The researchers think street lights may deter nocturnal moths from laying their eggs or put the insects at risk of being spotted and consumed by predators such as bats.

In turn, caterpillars that are born under streetlights, particularly LEDs, alter their feeding habits.

But there are practical solutions that don’t compromise public safety, they say, including dimming streetlights in the early hours, fitting motion sensors or using colour filters to cut out the most harmful wavelengths.

In the study, experts from Butterfly Conservation, Newcastle University and the UK Centre for Ecology & Hydrology surveyed caterpillars on stretches of grassland and hedgerows at the sides of roads in southern England.

Each of 26 sites with streetlights in Oxfordshire, Berkshire and Buckinghamshire was compared with a similar stretch of unlit road nearby.

Surveys showed a reduction of caterpillars by about half in lit areas (47% reduction in hedgerows; 33% in grass margins).

In a second experiment, lighting rigs were set up in fields. They found a reduction in caterpillars under LED lights, suggesting an effect on feeding behaviour.

Scientists are increasingly concerned about the decline of some populations of insects.

One scientific review of insect numbers in 2019 pointed to 40% of species undergoing “dramatic rates of decline” around the world.

The study said bees, ants and beetles were disappearing eight times faster than mammals, birds or reptiles, while other species, such as houseflies and cockroaches, were likely to boom.

The loss of insects has far-reaching consequences for entire ecosystems.

Insects provide a food source for many birds, amphibians, bats and reptiles, while plants rely on insects for pollination.

A HOLE in the Milky Way Galaxy found; may reveal how stars are formed – HT Tech

In another step taking humans closer to understanding the origins of the universe and how stars are formed, astronomers have discovered a massive void in the Milky Way Galaxy, between star-forming regions in the Perseus and Taurus constellations, according to a new study. The void, or space cavity, is a massive 500 light-years in width.

According to several reports, the void in the Milky Way Galaxy was spotted surrounded by molecular clouds, which could have been formed by the explosive death of a star around 10 million years ago, also known as a supernova. The researchers at the Institute for Theory and Computation (ITC) at the Harvard-Smithsonian Center For Astrophysics (CfA) believe the study’s findings could help scientists understand how stars could be formed due to supernovas.

In a statement, the researchers stated that the European Space Agency’s star-mapping Gaia spacecraft yielded data that was used to map molecular clouds located around the void, giving them a 3D view for the first time, a big upgrade over two-dimensional views of the Milky Way Galaxy region. The researchers say that they now know where they lie “with only 1 percent uncertainty” which will allow them to calculate the distance of the void from Earth.

In order to visualise the data, the researchers used software called Glue, which allowed them to create 3D molecular maps that could map the region where stars are formed. This new perspective will help them study how molecular clouds can be formed with gas and dust after a supernova explosion – to form new stars. “You can literally make the universe float over your kitchen table,” says Harvard professor and CfA astronomer Alyssa Goodman.

The data from these 3D maps of the region showed the researchers that the previously mentioned clouds were not actually connected, but instead located on either side of a large, invisible cavity. The clouds could have been formed as a result of the same supernova explosion about 10 million or 20 million years ago, according to the researchers. The findings of the study were published on September 22 in The Astrophysical Journal.

“Definitely upgraded toilets” for the next flight.

As if going to the bathroom in microgravity wasn’t complicated enough.

It sounds as though the four space tourists on SpaceX’s historic Inspiration4 flight last week had a bit of a smelly mishap. The Waste Management System experienced an “anomaly” — that’s code of “uh oh” in space jargon — with its suction fan causing the crew to struggle with doing their business while floating hundreds of miles above the surface.

Musk also promised a number of improvements for the next all-civilian space tourism flight. “Definitely upgraded toilets,” Musk responded to another Twitter account suggesting heated toilet seats. “We had some challenges with it this flight.”

We still don’t know how the faulty suction fan ended up affecting the crew’s three day trip. But if the history of crewed spaceflight is anything to go by, there’s a chance things got pretty unpleasant. Three days is also a long time to be stuck without any fresh air.

Space toilet technologies are still very much a work in progress, despite the many decades of human spaceflight. Last year, NASA launched a call for better space toilet designs that could gift future astronauts a better bathroom experience.

“If you ever pooped in space, you know that they need help,” Christian Cotichini, the CEO HeroX, which collaborated with NASA on the initiative, told Futurism last year. “I’ve got some video I can send you. It’s not pretty.”

The toilet on board the International Space Station has also experienced its fair share of failures, at one point causing gallons of “water” to flood into the cabin in 2019.

A trip on board a Crew Dragon will unquestionably be an expensive affair. It’s only fair that SpaceX uses last week’s launch as a learning experience to make some improvements.

More on the issue: SpaceX Tourists Struggled With Space Toilet

Futurism Readers: Find out how much you could save by switching to solar power at UnderstandSolar.com. By signing up through this link, Futurism.com may receive a small commission. 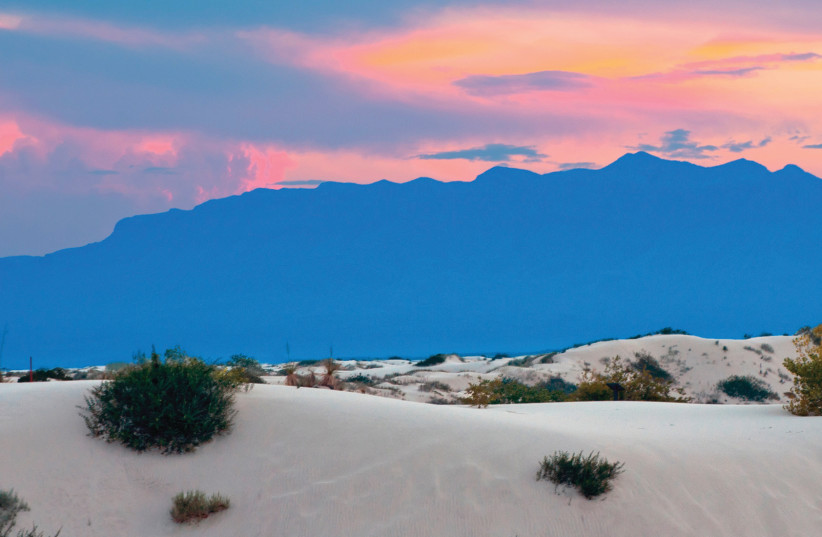 A team of archaeologists found that humans lived in North America during the Last Glacial Maximum, between 21,000 and 23,000 years ago, in a peer-reviewed study published by Science.org on Friday.
A US Geological Survey team led by Jeff Pigati and Kathleen Springer analyzed seed layers surrounding human footprints at Lake Otero in White Sands National Park, New Mexico, and found that they coincided with a major warming event that caused lower water levels, exposing ground on which humans and prehistoric animals walked.
The findings also suggest the coexistence of humans and prehistoric animals at a point in time where the phenomenon was previously unknown to have occurred. In addition to the human footprints, tracks were left by giant ground sloths, dire wolves, mammoths, and birds.
cnxps.cmd.push(function () cnxps( playerId: ’36af7c51-0caf-4741-9824-2c941fc6c17b’ ).render(‘4c4d856e0e6f4e3d808bbc1715e132f6’); );

“It is an important site because all of the trackways we’ve found there show an interaction of humans in the landscape alongside extinct animals, like mammoths and giant sloths,” said Sally Reynolds of Bournemouth University, who co-authored the study.
“We can see the co-existence between humans and animals on the site as a whole, and by being able to accurately date these footprints, we’re building a greater picture of the landscape,” she added.

The human footprints are the oldest evidence of human presence in the Americas, according to the University of Arizona. Previously, the only reliable evidence available suggested humans arrived in the region no more than 13,000-16,000 years ago. Based on the size of the footprints, the researchers ascertained that most of them were left by teenagers and children, though a few belonged to adults.
“We can think of our ancestors as quite functional, hunting and surviving, but what we see here is also activity of play, and of different ages coming together. A true insight into these early people,” said Matthew Bennett of Bournemouth University, another co-author of the study.