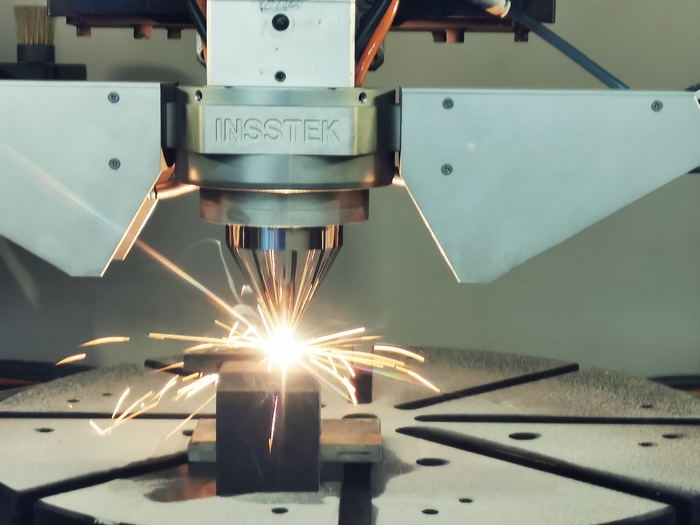 Scientists from Skoltech and their colleagues have used a 3D printer to fuse two materials in an alloy whose composition continuously changes from one region of the sample to the other, endowing the alloy with gradient magnetic properties. Despite the nonmagnetic nature of the constituent materials, the alloy exhibits magnetic properties. Published in The Journal of Materials Processing Technology, the study also offers a theoretical explanation for the phenomenon.

Once perceived as a mere novelty tool for rapid prototyping, 3D printing has grown into a full-blown industrial technology used to produce airplane parts, patient-matched implants and prosthetics, jewelry, and custom-fit shoes, among other things.

The main advantage of 3D printing is the ability to produce objects with very complex shapes that are impossible or too expensive to make with conventional manufacturing techniques, such as casting, rolling, and stamping. The technology also enables faster and riskier prototyping, and greater flexibility in terms of product customization and how many items are produced. And then there’s the added benefit of reduced waste.

One of the limitations of 3D printing is that it tends to use one homogeneous material or mixture throughout the entire item produced. By varying the composition from one part of the item to another, it could be endowed with properties that continuously change.

An example of this would be a rod made of an alloy of two metals whose ratio changes from 100% metal A to fifty-fifty, to 100% metal B, and so on. Provided that the metals in question mix well, without giving rise to defects, the rod’s gradient properties — including magnetic ones — could be technologically useful, for example, for motor rotors, strips for magnetic encoders, or transformators.

The authors of a recent Skoltech-led study published in The Journal of Materials Processing Technology report an experiment where they produced such an alloy. Its two components — the metals A and B above — are themselves alloys: aluminum bronze (copper, aluminum, and iron) and marine-grade stainless steel (mostly iron, chromium, and nickel). Both are technically known as paramagnetic, or “nonmagnetic” in layman’s terms. That is, they don’t stick to a magnet. Yet when they are mixed in equal proportions, the resulting alloy turns out to be a “soft” ferromagnet. That is, it is attracted to “hard” ferromagnets — like the one on the fridge — but does not itself become one.

“We used these two paramagnetic materials to create a gradient alloy with an InssTek MX-1000 3D printer. It employs a technique called directed energy deposition, which involves depositing powdered material from a nozzle and simultaneously melting it with a laser. The resulting alloy exhibited ferromagnetic properties to an extent that depended on the ratio between the two constituent materials,” said the study’s lead author Oleg Dubinin from the Additive Manufacturing Lab at Skoltech.

“Our study also provides a theoretical explanation of the emergence of ferromagnetic properties in the alloy in terms of its atomic structure,” the researcher went on. “While the two initial materials have a so-called face-centered cubic crystal structure, their combination results in a body-centered cubic structure.”

In the former, metal atoms sit in the corners of imaginary cubes and on their faces. In the latter, there are metal atoms at the centers of the invisible cubes instead of on their faces. This second arrangement gives the material its ferromagnetic properties.

“Gradient soft magnetic alloys could find applications in machine engineering, for example, in electrical motors,” commented PI Stanislav Evlashin, a leading research scientist at Skoltech. “Our findings show that directed energy deposition is not just a way to 3D-print gradient materials, but also a way to discover new alloys. Besides that, the technology is highly efficient and suitable for manufacturing even large-size parts quickly.”

Skoltech is a private international university located in Russia. Established in 2011 in collaboration with the Massachusetts Institute of Technology (MIT), Skoltech is cultivating a new generation of leaders in the fields of science, technology, and business, conducting research in breakthrough fields, and promoting technological innovation with the goal of solving critical problems that face Russia and the world. Skoltech is focusing on six priority areas: artificial intelligence and communications, life sciences and health, cutting-edge engineering and advanced materials, energy efficiency and ESG, photonics and quantum technologies, advanced studies. Website: https://www.skoltech.ru/.

Disclaimer: AAAS and EurekAlert! are not responsible for the accuracy of news releases posted to EurekAlert! by contributing institutions or for the use of any information through the EurekAlert system.

New planet outside of Milky Way may have been spotted, researchers say – NBC News

A photograph of a cube-like object captured by a Chinese rover on the far side of the moon has fanned speculation over what it could be.

The Yutu-2 caught an image of what seems like a large cubic object on the horizon about 80 metres from its location, said Our Space, a Chinese government science website, citing the rover’s last log on Dec. 3.

The solar-powered Yutu, or “Jade Rabbit” in Chinese, will cover the distance of 80 metres in two to three lunar days, according to Our Space, or two to three Earth months. The robotic rover has been operating in the Von Karman Crater in the South Pole-Aitken Basin since its deployment in January 2019.

The mission was a historic first, with no other nation having landed on the far side of the moon until then. With the moon tidally locked to Earth — rotating at the same speed as it orbits our planet — most of its “dark side” is never visible to those on Earth.

There is a new comet in town, and December is your only chance to see it before disappears forever. Astronomers say that Comet Leonard is our best and brightest comet to see in 2021.

The comet was first discovered in January by astronomer Greg Leonard. The celestial object has likely spent the last 35,000 years traveling toward the sun, according to Sky & Telescope, and once it makes a close pass of our star on January 3, we won’t be seeing the comet again.

As the comet nears the sun, it brightens, which is why the weeks leading up to this event make the comet easier to see.

It’s also an ultrafast comet, blazing through the inner solar system at 158,084 miles per hour (71 kilometres per second), but it will still appear like a slow-moving object due to its distance from Earth, according to EarthSky.

Comet Leonard will make it closest approach to Earth on December 12, coming within 21 million miles (34 million kilometres) of our planet. Then, it will sweep by Venus on December 18.

The comet will be visible in the skies of both the Northern and Southern hemispheres this month.

It’s difficult to predict how well we may be able to see a comet, but you”ll probably need binoculars to spot this one, according to NASA. Keep an eye out for an object that looks like a fuzzy star.

“In the first couple of weeks of December, Comet Leonard can be found in the east before sunrise, passing between Arcturus and the handle of the Big Dipper,” the agency shared in a post.

“It approaches the horizon right around the time of its closest approach to Earth, meaning it’ll likely be brighter but more challenging to observe. It then switches over to being an evening object after around Dec. 14th, for just a little while after the Sun sets — as it begins its long haul outward from the Sun again, progressively fading in brightness.”

As comets near the sun, these giant iceballs begin to shed some of their material, which forms a halo, or coma, around the object.

Dust and gas stream behind comets to form their extremely long tails. Most comets originate from the icy edge of our solar system and only become visible to us as they travel through the inner solar system, where Earth is located, during their long orbits of the sun.

It’s possible that Comet Leonard will be visible to skywatchers looking with the naked eye, but if you’re worried about missing this once-in-a-lifetime viewing experience, The Virtual Telescope Project will be sharing a livestream from its observatory in Rome.

Hubble Space Telescope has often captured stunning images of mysterious events in space. It has allowed astronomers to widen their research and uncover new details. Recently, the telescope was trying to understand how young stars influenced their environment and it witnessed a shock wave of colliding luminous gases in the ‘Running Man’ Nebula. The image of the Herbig-Haro object, known as HH 45, showed clouds of gas and dust glow. Herbig-Haro is a type of nebula that forms when gas from a newborn star collides with dust around it at huge speeds and produces shock waves.

Herbig-Haro objects are rarely seen. This object is located in the nebula NGC 1977, also called the Running Man Nebula, which is a complex structure of three nebulae in the Great Orion Nebula, about  5,000 light-years from the Earth.

The Running Man Nebula is a reflection nebula, meaning it does not emit light on its own but reflects light from nearby stars “like a streetlight illuminating fog,” according to NASA. Hubble was looking at this region for “stellar jets and planet-forming disks around young stars.” It was trying to examine how their environment affects the evolution of such disks.

The Hubble image showed two sets of ionised gases glowing in blue and purple colours. While blue indicated ionised oxygen, purple represented ionised magnesium. “Researchers were particularly interested in these elements because they could be used to identify shocks and ionisation fronts,” the NASA statement read.

This image was not a bad capture for an observatory that was waking up after a technical problem and went into “safe mode” in October. Hubble, a joint project by NASA and ESA, was last serviced in person in 2009 and has not been visited by astronauts since 2011.

NASA is set to launch the more powerful James Webb telescope in December as a “successor” to the Hubble Space Telescope. Citing the differences between the both, NASA has stated that their capabilities weren’t identical. One of the differences NASA pointed out was that while James Webb telescope will study the universe largely in infrared, Hubble had been focusing on optical and ultraviolet wavelengths.