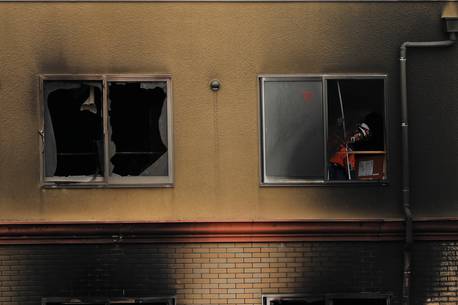 Police had issued an arrest warrant for Shinji Aoba at the time of the fire but had been unable to question him after he suffered serious, self-inflicted burns.

Public broadcaster NHK said that police arrested Aoba at a Kyoto hospital, where he confessed to the crimes, and that he was transferred to police headquarters for further questioning.

A spokesman at Kyoto Prefectural Police Headquarters said he could not confirm the arrest.

The fire had killed mostly young artists at the studio, shocked animation fans around the world, and prompted tributes from world leaders such as Canadian Prime Minister Justin Trudeau and Apple’s chief executive, Tim Cook.

In a statement, Kyoto Animation said it expected the suspect to be prosecuted “to the maximum extent” under the law.

“We have no further words for the suspect… Our fallen colleagues will never return, and our wounds will never heal,” it said.

Kyoto Animation is well known in Japan and abroad for its series and movies, including “Violet Evergarden”, which has been on Netflix.

In mid-July last year, Aoba went to the studio, poured fuel around the entrance and shouted “Die!” as he set the building ablaze, media reported. After the attack, Aoba reportedly told police he had done it because the studio had plagiarized his novel.

How Canadians Can Cope With The Quarantine At Home 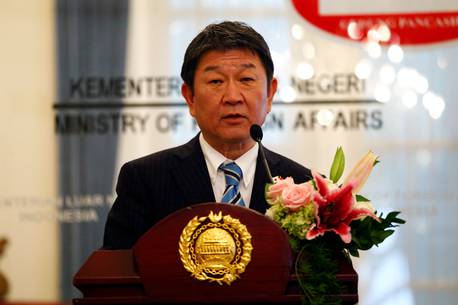 TOKYO (Reuters) – Japan and Britain agreed to lift auto tariffs for a post-Brexit trade agreement in 2026 despite Japan’s push to lift the tariffs earlier, the Nikkei Asian Review reported on Sunday.

British Trade Minister Lizz Truss said in a statement that they “have reached consensus on the major elements of a deal,” and both have announced that they will agree on the principles of a trade deal by the end of August.

However, despite reassurances that the two countries had by and large reached an agreement, auto tariffs and agricultural products have proven to be a sticking point in the negotiations.

Japan had hoped to lift tariffs on auto and auto parts earlier than in the current trade deal between the EU and Japan, which will phase out import tariffs on Japanese vehicles by 2026.

“Japan agreed to phasing auto tariffs on Japanese vehicles out in 2026 in line with the EU trade deal, despite asking to hasten the timing,” Nikkei reported on Sunday.

Britain, on the other hand, is hoping to secure better terms on agriculture, Financial Times reporter George Parker tweeted on Friday.

“UK-Japan trade talks close to agreement but @trussliz said by Brits to be holding out on agricultural access,” he said, referring to Truss’s Twitter handle.

Britain, which left the European Union in January, is seeking to clinch a trade agreement with Japan based on the 2019 EU-Japan agreement by the end of the year, when Britain’s no-change transition arrangement with the EU will expire.

The Japanese Trade Ministry and Foreign Ministry did not immediately respond to Reuters’ request for comment.

I’m tired of the media throwing anti-abortion issues in with LGBTQ rights.

While it’s understood that over 50% of Canadians support abortion rights there is also about 25% of Canadians who are pro-life and support some kind of protection for the unborn. This is a significant minority, more support than there is for many other minority issues in Canada today.

Anti-abortion is also not just a religious issue as we know from a scientific viewpoint that we are dealing with a human life.

Let’s keep these issues separate and rationally discuss them on their own merits just like the issue of capital punishment or any other ethical issue in society instead of making it a partisan polarization.

Thiruvananthapuram, Aug 9 (IANS) For the second day in succession, Kerala Chief Minister Pinarayi Vijayan on Saturday lashed out at the media after facing a spate of questions on the role played by gold smuggling case prime accused Swapna Suresh in a key project of his government.

The latest revelation to come out from the Customs’ questioning of Suresh is that she had received a sum of Rs 1 crore, as commission from an agency, in Vijayan’s signature “Life Mission” project. This venture aims to provide the homeless their own dwelling, either directly through the government or through sponsors.

In response, Vijayan said that he will find out about this but added that this was a project funded by a UAE-based charity organisation.

However as questions on this point increased, Vijayan again lost his cool and said it was “unfortunate some media is taking up this for some others” who are out to wreck his government.

As a media person asked why he enjoys when he is praised by the media, but cannot accept probing questions, the Chief Minister responded: “Yes, this is because that is politics and this is part of a political conspiracy into which a section of the media also is a part.

With this, Vijayan abruptly ended the press conference and left, saying that the time is up.

On Friday also, he lost his cool on questions about the gold smuggling case, accusing a section of the media to have an agenda of “removing him”.