PARIS — After limping its way back from the COVID pandemic last year, the global economic recovery has been rattled by the Omicron variant’s rapid rise.

The travel industry has been thrown into disarray again, workers have been forced to isolate at home and governments are facing a stark choice between imposing restrictions or letting the economy be.

Could the highly contagious Omicron variant have a severe impact on the recovery? Or will its mild symptoms keep the economy from sinking again?

How bad a hit on growth?

The head of the International Monetary Fund, Kristalina Georgieva, warned last month that global economic growth forecasts may have to be slashed following the emergence of Omicron.

The IMF has previously banked on growth of 5.9 percent for 2021 and 4.9 percent this year, but it could now revise its estimates later this month.

To soften the blow on the economy, US health authorities have cut the isolation period for asymptomatic cases by half to five days.

Mark Zandi, chief economist at Moody’s, told AFP he expects US growth of 2.2 percent in the first quarter, more than half lower than a previous estimate of 5.2 percent.

“Omicron is already doing economic damage, as is clear from weaker credit card spending, a decline in restaurant bookings, air flight cancelations, and many schools going back to online learning,” Zandi said. 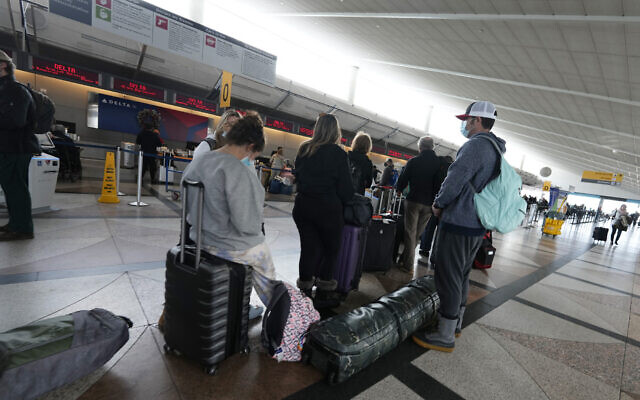 Passengers queue up to check in at the counter for Delta Airlines Monday, Jan. 3, 2022, in the main terminal of Denver International Airport in Denver. (AP Photo/David Zalubowski)

“However, I do expect Omicron to pass through quickly and for growth to rebound in the second quarter, and growth for the year to be unaffected,” he added.

“Broadly, I think each wave of the virus is doing less damage to the healthcare system and economy than the previous wave.”

In the eurozone, tighter restrictions, consumer caution and absenteeism will reduce economic activity in the next few weeks, but the economy will rebound in February, according to Andrew Kenningham, chief Europe economist at Capital Economics.

Countries with lower vaccination rates, which are mainly developing economies, face greater uncertainty, and a zero-COVID policy in China could put a brake on growth in the world’s second-biggest economy as it locks down entire cities.

The travel industry was looking forward to a rebound in 2022 after it was devastated by border closures and lockdowns.

But the emergence of Omicron during the key winter holiday season caused thousands of flight cancellations, cruises to be forced to dock and fewer hotel bookings.

Investors, however, have been optimistic, as shares of airline and cruise companies have risen in recent weeks. 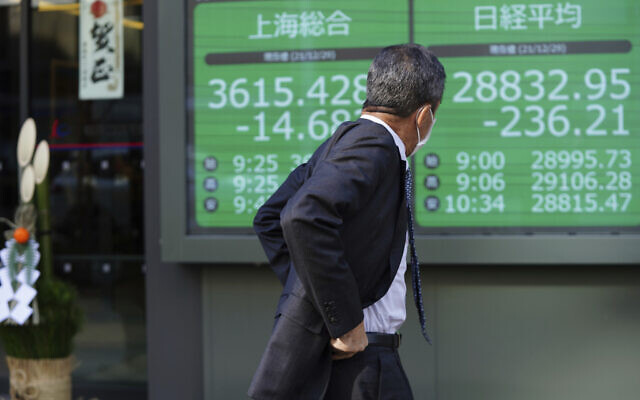 A man wearing a protective mask looks at an electronic stock board showing Japan’s Nikkei 225 and Shanghai indexes at a securities firm with a traditional New Year decoration at it entrance Wednesday, Dec. 29, 2021, in Tokyo. (AP Photo/Eugene Hoshiko)

“The markets seemed to be looking at the post-Omicron period,” said Alexandre Baradez, an analyst at IG France.

The economic recovery has had an adverse side effect: Inflation that has soared to decades-high levels in the United States and Europe as energy prices soared and rising demand faced supply shortages.

Central banks have insisted that high inflation is only temporary and prices will eventually fall, but it has hurt consumers and businesses.

Could it get worse?

“Little is certain about Omicron’s impact on consumer demand, but people who stay at home because of the variant are more likely to spend their money on retail goods rather than services like dining out or in-person entertainment,” said Jack Kleinhenz, chief economist at the US National Retail Federation.

“That would put further pressure on inflation since supply chains are already overloaded across the globe,” he said.

Supply chain bottlenecks caused shortages of a slew of materials last year, driving up the prices of many products. Higher demand for products on goods on supply could further fuel price increases.

The Federal Reserve rattled markets this week as minutes from its December meeting showed that the US central bank was ready to tighten monetary policy more aggressively to tame inflation.

Elsewhere, inflation is eroding purchasing power after running into double digits in Brazil and Nigeria.

In Britain, the British Chambers of Commerce said 58 percent of firms expect their prices to increase in the next three months.

Governments deployed massive stimulus programs in 2020 to save their economies, piling up $226 trillion of debt, according to the IMF.

Furlough schemes to keep people employed “made sense” when there was so much uncertainty and entire industries shut down, said Niclas Poitiers, research fellow at Bruegel, a Brussels-based think tank.

“I don’t see yet the necessity for massive funds to the economy,” Poitiers said.

The United States and Europe are instead investing in structural programs, such as President Joe Biden’s $1.75 trillion “Build Back Better” social and climate spending plan.

The Canadian dollar strengthened against the greenback on Thursday as U.S. bond yields stabilized and Ontario, Canada’s most populous province, said it would soon ease restrictions to curb the spread of the Omicron coronavirus variant.

Among G10 currencies, only the Australian dollar notched a bigger gain. Both Canada and Australia are major producers of commodities.

Ontario has blunted transmission of the Omicron variant and it will gradually ease restrictions on businesses from end-January, Premier Doug Ford said.

Despite the prospect of slower economic growth due to restrictions, investors have raised bets that the Bank of Canada will hike interest rates on Jan. 26. It would be the first hike since October 2018.

Canadian retail sales data, due on Friday, could offer more clues on the strength of the domestic economy.

The price of oil, one of Canada’s major exports, settled 0.1% lower at $86.90 a barrel as U.S. crude inventories rose for the first time in eight weeks and investors took profits after a recent rally.

Canadian government bond yields were mixed across a flatter curve. The 10-year eased 2.4 basis points to 1.857%, after touching on Wednesday its highest intraday level since March 2019 at 1.905%.

Canada’s main stock index on Thursday fell to its lowest level in more than two weeks as worries about the inflation outlook and prospects for higher interest rates weighed on investor sentiment.

Data on Wednesday showed that Canadian inflation climbed in December to a 30-year high.

Investors have raised bets on the Bank of Canada hiking interest rates at a policy announcement next week and are also concerned the Federal Reserve could become aggressive in controlling inflation.

The TSX gained 22% in 2021, its best yearly performance since 2009, supported by massive stimulus, vaccine rollouts and hopes of global economic recovery.

“The markets are deciding that the last few years people have made way too much money and it is time to give some of that back,” Schwartz said.

Broad-based gains included a 2.2% decline for consumer discretionary shares, while the basic materials group, which includes precious and base metals miners and fertilizer companies, ended 1.8% lower.

Energy was down 0.7% as an uptick in U.S. crude inventories arrested the recent move higher in oil prices. U.S. crude oil futures settled 0.1% lower at $86.90 a barrel.

Among 11 major sectors, utilities was the only one to end higher, gaining 0.2%.

WASHINGTON — Any sanctions imposed on Russia over its aggression toward Ukraine would not particularly expose the U.S. economy, although the Biden administration is focused on any possible impact on oil, White House National Economic Council Director Brian Deese said on Thursday.

“The actions that we have ready and that we are working closely with our allies to deploy would impose very significant costs across time on the Russian economy, and it would do so in a way that mitigates the impact on the global economy and the American economy,” he told CNN. (Reporting by Susan Heavey Editing by Raissa Kasolowsky)