For the second time this month, there’s promising news from a COVID-19 vaccine candidate: Moderna said Monday its shots provide strong protection, a dash of hope against the grim backdrop of coronavirus surges in the U.S. and around the world.

Moderna said its vaccine appears to be 94.5% effective, according to preliminary data from the company’s still ongoing study. A week ago, competitor Pfizer Inc. announced its own COVID-19 vaccine appeared similarly effective — news that puts both companies on track to seek permission within weeks for emergency use in the U.S.

“That should give us all hope that actually a vaccine is going to be able to stop this pandemic and hopefully get us back to our lives,” Hoge told The Associated Press.

“It won’t be Moderna alone that solves this problem. It’s going to require many vaccines” to meet the global demand, he added.

Prime Minister Justin Trudeau said in late October that Canada has signed six agreements with a number of companies taking part in the global race to produce a safe and effective vaccine for COVID-19, including Moderna and Pfizer.

Both of those American vaccine makers have asked Health Canada to review their products.

A vaccine can’t come fast enough, as case totals in Canada are rapidly approaching the 300,000 mark, even as long-standing national virus hot spots Quebec and Ontario recorded declines in their daily tallies on Sunday.

In the United States, the case total topped 11 million over the weekend — 1 million of them recorded in just the past week. The pandemic has killed more than 1.3 million people worldwide, more than 245,000 of them in the U.S.

Still, if the U.S. Food and Drug Administration allows emergency use of Moderna’s or Pfizer’s candidates, there will be limited, rationed supplies before the end of the year. Both require people to get two shots, several weeks apart. Moderna expects to have about 20 million doses, earmarked for the U.S., by the end of 2020. Pfizer and its German partner BioNTech expect to have about 50 million doses globally by year’s end.

Dr. Anthony Fauci, head of the National Institute of Allergy and Infectious Diseases, told NBC’s “Today” on Monday that Moderna’s finding, along with similar results from Pfizer last week for its vaccine, “is something that foretells an impact on this outbreak.”

“So now we have two vaccines that are really quite effective, so I think this is a really strong step forward to where we want to be about getting control with this outbreak,” Fauci said.

Moderna’s vaccine, created with the National Institutes of Health, is being studied in 30,000 volunteers who received either the real vaccination or a dummy shot. On Sunday, an independent monitoring board broke the code to examine 95 infections that were recorded starting two weeks after volunteers’ second dose — and discovered all but five illnesses occurred in participants who got the placebo.

The study is continuing, and Moderna acknowledged the protection rate might change as more COVID-19 infections are detected and added to the calculations. Also, it’s too soon to know how long protection lasts. Both cautions apply to Pfizer’s vaccine as well.

But Moderna’s independent monitors reported some additional, promising tidbits: All 11 severe COVID-19 cases were among placebo recipients, and there were no significant safety concerns.

The main side effects were fatigue, muscle aches and injection-site pain after the vaccine’s second dose, at rates that Hoge characterized as more common than with flu shots but on par with others such as shingles vaccine.

Moderna shares rocketed higher on the announcement and appeared to be headed for an all-time high Monday. The Cambridge, Massachusetts, company’s vaccine is among 11 candidates in late-stage testing around the world, four of them in huge studies in the U.S.

Both Moderna’s shots and the Pfizer-BioNTech candidate are so-called mRNA vaccines, a brand-new technology. They aren’t made with the coronavirus itself, meaning there’s no chance anyone could catch it from the shots. Instead, the vaccine contains a piece of genetic code that trains the immune system to recognize the spiked protein on the surface of the virus.

The strong results were a surprise. Scientists have warned for months that any COVID-19 shot may be only as good as flu vaccines, which are about 50% effective.

Another steep challenge: distributing doses that must be kept very cold. Both the Moderna and Pfizer shots are frozen but at different temperatures. Moderna announced Monday that once thawed, its doses can last longer in a refrigerator than initially thought, up to 30 days. Pfizer’s shots require long-term storage at ultra-cold temperatures.

Home sales slowed in October but average price up 15% in past year, CREA says – CBC.ca

The Public Health Agency of Canada plans to roll out webinars in an effort to combat increasing misinformation surrounding the impending novel coronavirus vaccine.

Speaking to reporters at the 2020 Canadian Immunization Conference on Wednesday, Dr. Theresa Tam, Canada’s chief public health officer, said the webinars will include a broad range of topics, including Health Canada regulatory perspectives, the different types of vaccines that will be available to Canadians, how to run immunization clinics as well as guidance for use from the National Advisory Committee on Immunization.

“Because of the social media and its Internet age, we’ve got even more of a challenge on our hands than anyone else in tackling pandemics of the past,” said Tam, adding that it was important Canadians understood how vaccines are developed.

Read more:
The global race for coronavirus vaccine doses: how does Canada compare?

“The regulatory process is rigorous and (the federal government) would only provide vaccines that have gone through safety evaluations and efficacy evaluations.”

An Ipsos poll conducted exclusively for Global News found a majority of Canadians surveyed, 59 per cent, said they would still support for mandatory COVID-19 vaccines — but more than 70 per cent said they would feel nervous taking a vaccine that went through such quick development.

Tam said the webinars will seek to dispel some of those fears, and explain how scientists were able to compress years worth of vaccine research into what she described as an “incredible global collaboration that has resulted in vaccines being available essentially within the year of the start of a pandemic.”

The top health official did not explicitly say when the webinars would be rolling out, but said to “expect the first webinars to be delivered very shortly.”

Tam’s announcement comes as Health Canada reviews multiple vaccine candidates, including Pfizer and BioNtech’s, which became the world’s first vaccine to receive approval after it was authorized by British health officials earlier on Wednesday.

The federal government has so far secured a minimum of 20 million doses from Pfizer and BioNtech, with the option to secure millions more if they’re approved.

According to Tam, Canadians can expect to see the first shipments of the vaccine roll out early next year, adding that front-line workers, high-risk groups like seniors and those in more isolated Indigenous communities will be considered for prioritization.

“As we roll out a vaccine, we have to take into account who is most at risk — at risk of exposure of severe outcomes and ensuring that these populations have priority access,” she said.

“Vaccine developers in phase three clinical trials are including some of these key populations.” 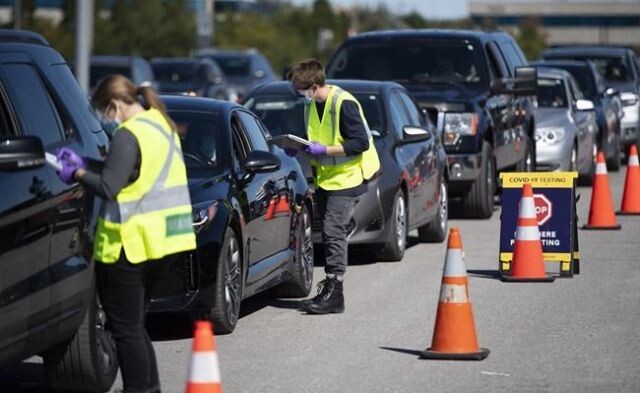 A new poll suggests most Canadians aren’t currently worried that people in other countries might get a COVID-19 vaccine first.

Thirty-seven per cent of respondents to a survey conducted by Léger and the Association for Canadian Studies say they are very concerned that Canada may not receive doses of a new COVID vaccine as early as the United States.

“That’s not necessarily low, but I think most pundits would have expected this number to be much higher,” said Léger executive vice-president Christian Bourque.

Getting a vaccine before other countries doesn’t seem to be “a major (issue for the Liberal government), which is contrary to what we might have thought … when the prime minister actually said that we would not be the first ones to get doses,” Bourque said.

The amount of concern regarding getting a COVID-19 vaccine first varies along party lines, with 45 per cent of self-identified Conservative supporters saying they are very concerned that Canada may not receive doses of a new COVID vaccine at the same time as other countries. Only 38 per cent of Liberal supporters say they are concerned.

Have an opinion? Send it to [email protected]


The federal government has struck a deal with the United States pharmaceutical company Pfizer to buy more than 34 million doses of its Covid-19 vaccine, the first 250,000 of which are expected to arrive in Mexico this month.

The Health Ministry announced on Twitter that Health Minister Jorge Alcocer signed an agreement with Pfizer on Wednesday for the manufacture and supply of 34.4 million doses of the vaccine it developed with Germany’s BioNTech. The vaccine was 95% effective in phase 3 trials and caused no serious safety concerns, Pfizer said in November.

“The expectation is to receive 250,000 doses this month to protect Mexicans,” the Health Ministry said, adding that the inoculation of health workers will be a priority.

President López Obrador said earlier on Wednesday that the government had allocated 20 billion pesos (just under US $1 billion) for an initial purchase of Covid-19 vaccines, adding that Mexico has purchase agreements with companies other than Pfizer.

“The authorization process at [health regulator] Cofepris is being simplified,” he said.

Mexico’s agreement with Pfizer comes the same day as regulators in the United Kingdom granted emergency authorization for the Pfizer/BioNTech vaccine. The rollout in the U.K, the first western nation to approve a Covid-19 vaccine, is scheduled to begin next week, with priority given to the elderly and their caregivers.

Mexican Foreign Minister Marcelo Ebrard acknowledged the U.K. approval in a Twitter post and said that Cofepris has already received an application for authorization here.

“The United Kingdom has authorized the vaccine developed by Pfizer. In Mexico the regulatory authority (Health Ministry-Cofepris) already has the corresponding application. What many people imagined was impossible is now a reality: vaccination is about to begin in December 2020,” he wrote.

The vaccines ordered will be enough to inoculate 17.2 million people as each person must be given two shots 21 days apart. With only 250,000 doses expected to arrive this month, just 125,000 Mexicans – about 0.1% of the population – will be able to be vaccinated by the end of the year.

Nevertheless, the news that a vaccine is on the way is undoubtedly good news for Mexico, which has been hit harder by the pandemic than most other countries around the world.

The accumulated case tally rose to 1,122,362 on Tuesday with 8,819 new cases reported by the Health Ministry. The total is the 11th highest in the world, according to data compiled by Johns Hopkins University.

An additional 825 Covid-19 fatalities registered by health authorities lifted Mexico’s official pandemic death toll to 106,765, the fourth highest in the world after the United States, Brazil and India.

The case tally and death toll are widely believed to be much higher because Mexico has not tested widely for Covid-19.