New Brunswick’s vaccination numbers increased slightly on Saturday with 58.1 per cent of the eligible population having received two doses of COVID-19 vaccine.

The number of first doses also increased slightly with 227 being administered Saturday. That brought the total to 557,736, or 80.4 per cent of the eligible population.

Anyone age 12 and over can receive a COVID-19 vaccine and anyone can get a second dose 28 days after receiving the first.

Public Health is reporting one new case of COVID-19 in the province. It brings the total number of active cases to nine.

People with one of those symptoms should stay at home, call Call Tele-Care 811 or their doctor, and follow instructions.

Among Fully Vaccinated, Breakthrough Covid-19 Infections Are More Common Than Previously Thought: Does It Matter? – Forbes

Vaccines are highly effective at preventing severe Covid-19 disease, but they don’t form a “golden shield” against contracting coronavirus.

In recent days, breakthrough infections have featured prominently in the news. On Tuesday, the White House announced breakthrough infections among fully vaccinated staff. Breakthroughs have also been occurring on Capitol Hill. For example, a number of vaccinated individuals in Speaker Pelosi’s office have tested positive. And Covid-19 outbreaks continue to wreak havoc in the professional sports world, including several cases among vaccinated New York Yankee baseball players.

Breakthrough infections are more common than previously thought, and probably growing in incidence with the ascendance and now dominance of the Delta variant.

The question is, does it matter? The answer is yes. First, though breakthrough infections usually don’t lead to severe illness, they can. In the U.K., it was reported two days ago that 40% of confirmed Delta variant patients admitted to hospital had received at least one dose of vaccine. This implies at least moderate resistance to the vaccine, especially among those who have only have one dose. Second, and important in terms of viral spread, vaccinated individuals who get breakthrough Delta variant infections can and do transmit the coronavirus to others.

Virologists at several of the Netherlands’ leading academic medical centers have observed that fully vaccinated healthcare workers who contract coronavirus can transmit it, whether they are symptomatic or asymptomatic. Transmission can take place from fully vaccinated to partially and unvaccinated persons, but also between fully vaccinated persons. Therefore, the implications of breakthrough infections for further transmission are quite evident. Though the Dutch virologists acknowledge that most of the source of the spread of the virus is among the unvaccinated, it’s clearly not confined to that group.

As such, the Delta variant presents a formidable challenge. The mRNA and other vaccines are still holding up well against severe disease, but not nearly as well at preventing infections.

This week, Israel reported a rate of vaccine efficacy of between 88% and 91% against the Delta variant in preventing severe disease; a decline, albeit relatively modest, compared to the initial numbers reported four months ago. But, there appears to be a much more significant reduction in the efficacy against preventing infections; more than a 50% decrease, which is consistent with the theme of diminishing vaccine efficacy over time, as reported in a previously released Israeli Ministry of Health study, and studies from the U.K. and Singapore.

When asked on Wednesday night about breakthrough Covid-19 cases, President Biden responded by saying it’s a “tiny percentage and not life-threatening.” The media mostly endorses this rather categorical view that’s inconsistent with the data. For example, the New York Times featured an article on Thursday that stated breakthrough infections are “relatively uncommon.”

Well, breakthrough infections are in fact not uncommon.

Dutch virologists who observed fully vaccinated healthcare workers contracting coronavirus and then transmitting to others, point out that their findings may be relevant in terms of formulating masking and distancing policy for vaccinated individuals in indoor public spaces.

In the absence of an unambiguous federal policy, a patchwork of local and state policies will continue to emerge. A number of municipalities have already reinstated mask mandates that apply to all, whether unvaccinated, partially or fully vaccinated. Others may follow suit as the Delta wave intensifies.

Interior Health, once again, had the lion’s share of new COVID-19 cases over the last 24 hours, recording 31 cases out of the provincial total of 78.

Out of 729 active cases in the province, 222 are in Interior Health.

There are 48 B.C. residents hospitalized with COVID, 16 of whom are in intensive care. There have been no new deaths.

The vaccination rate has increased by 0.1 per cent to 80.1 per cent of residents over the age of 12. Fifty per cent of those have received second doses of a vaccine.

To contact a reporter for this story, email Rob Munro or call 250-808-0143 or email the editor. You can also submitphotos, videos or news tips to the newsroom and be entered to win a monthly prize draw. 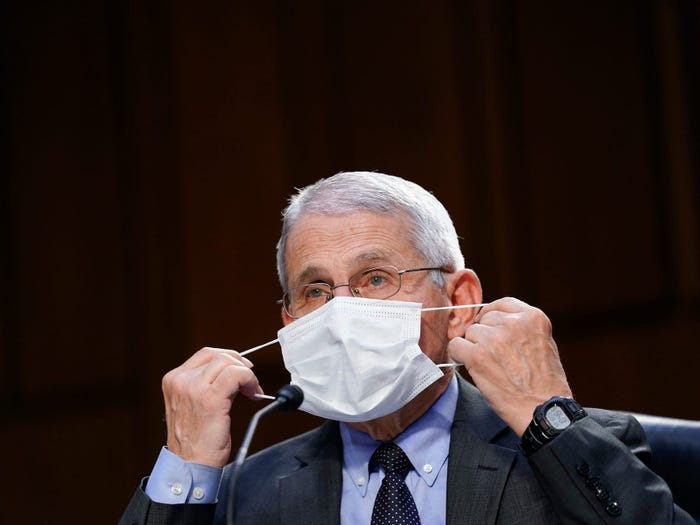 Fauci, who is President Joe Biden’s chief medical advisor, told CNBC on Wednesday that “if you want to go the extra mile of safety even though you’re vaccinated when you’re indoors, particularly in crowded places, you might want to consider wearing a mask.”

Fauci said wearing a mask indoors was “suggested” when a virus was spreading fast in a community.

The Delta variant is more infectious and has mutations that help it avoid the body’s immune response. As it spreads in the US, more fully vaccinated Americans are catching COVID-19 — albeit with milder, or no, symptoms.

“This virus is clearly different than the viruses and the variants that we’ve had experience with before,” Fauci said. “It has an extraordinary capability of transmitting from person to person.”

The Centers for Disease for Disease Control and Prevention recommends that fully vaccinated people don’t need to wear masks, except in certain situations, for example during flights.

States, workplaces, and businesses can enforce their own mask rules.

Read more: Experts explain why the mRNA tech that revolutionized COVID-19 vaccines could be the answer to incurable diseases, heart attacks, and even snake bites: ‘The possibilities are endless’

The public-health body has come under pressure to review its guidance in recent weeks because of the emergence of the Delta variant, which is thought to be at least 50% more infectious than the formerly dominant Alpha variant.

The CDC has estimated that Delta accounts for 83% of all new infections in the US. The nation recorded 52,032 new COVID-19 cases on Wednesday, according to Johns Hopkins University.

Dr. Jerome Adams, the former surgeon general, said Sunday that “the emerging data suggests CDC should be advising to vax it and mask it.” The World Health Organization on June 26 said fully vaccinated people should wear masks in public settings.

More than 161 million Americans are fully vaccinated, or 48% of the population, according to the CDC.

Some states have already urged fully vaccinated residents to put their masks back on.

The Los Angeles County Department of Public Health on June 28 said it “strongly recommends everyone, regardless of vaccination status, wear masks indoors in public places as a precautionary measure,” citing the Delta variant.

Despite his views on masks, Fauci said “the easiest and best and most effective way that we can prevent the emergence of a new variant and crush the already existing Delta variant is to get everyone vaccinated.”

In the US, data has indicated that more than 99.5% of COVID-19 deaths are among unvaccinated people. “That is a statistic that speaks for itself,” Fauci told CNBC.

Among Fully Vaccinated, Breakthrough Covid-19 Infections Are More Common Than Previously Thought: Does It Matter? – Forbes