The two doctors will be live on N.W.T.’s The Trailbreaker on CBC Radio One at 7 a.m. MT. The bi-weekly call-in show will also be live streamed here and on CBC N.W.T.’s Facebook page.

Since the last call-in show, a COVID-19 outbreak shut down operations at the Gahcho Kué diamond mine, after six workers tested positive.

Kandola said at her weekly news briefing on Wednesday that she believes the outbreak has stabilized.

She said her office is working closely with DeBeers, the owner of the mine, to manage the situation. She said all 330 workers at the mine have been tested.

The N.W.T. also announced 11 more community vaccination clinics for residents to receive their second dose of the Moderna vaccine this week. Yellowknife also saw 500 new appointments for the vaccine this week, and expanded the priority lists.

A containment order in Fort Liard, which had been put in place to stop the spread of COVID-19 after seeing a cluster of cases, was also lifted.

As of Wednesday evening, there were seven active cases in the territory; two are residents and the remaining five are non-residents. 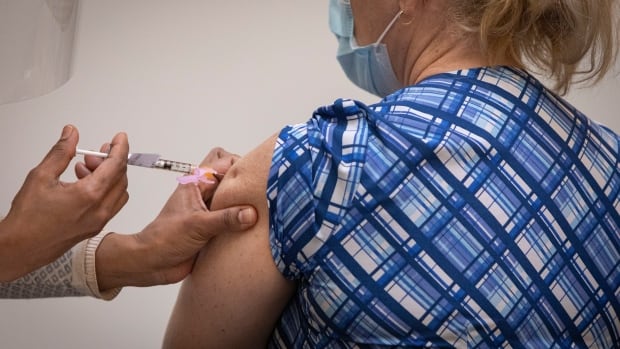 Every eligible adult in British Columbia should be able to receive a first dose of a COVID-19 vaccine by late July after the approval of a new vaccine and a decision to delay second doses.

Health officials announced the accelerated timeline Monday as the province moved into the second, seniors-focused phase.

Seniors 80 and older, Indigenous seniors 65 and older, hospital staff and medical specialists, vulnerable populations living and working in congregated settings, and staff providing in-home support to seniors will begin getting their shots this month.

The province’s vaccination plan is focused on inoculating high-risk people and most elderly populations by April, followed by younger age groups in the spring and summer.

Also on Monday, the province announced it is immediately extending the time between first and second doses of COVID-19 vaccine to four months, saying studies are showing strong protection from COVID-19 with one dose.

Cases of coronavirus variants of concern continue to climb in B.C.

A total of 1,478 new cases of COVID-19 and eight more deaths were announced on Monday.

The number of hospitalized patients is at 236 people, 65 of whom are in intensive care.

A total of 1,363 people in B.C. have lost their lives due to COVID-19 since the pandemic began.

There are currently 4,464 active cases of coronavirus in the province, with public health monitoring 8,210 people across B.C. who are in self-isolation due to COVID-19 exposure.

More than 74,776 people who tested positive have recovered.

The orders were put in place by Provincial Health Officer Dr. Bonnie Henry last year as a way to curtail the spread of COVID-19 and were last extended on Feb. 10.

A lawyer for a group of British Columbia churches challenging COVID-19 rules that prohibit in-person religious services says the provincial health officer’s orders allow secular gatherings such as in-class education and food distribution for people in need, while discriminating against churches and their congregants’ right to freedom of religion.

How to get your COVID-19 vaccination shot in B.C. – Times Colonist

The vaccines are coming. After a long wait, B.C. is gearing up for one of its largest mass immunization efforts in history.

On Monday, the province unveiled Phase 2 of its COVID-19 rollout plan and announced that seniors over 80 and Indigenous people over 65 will start receiving their vaccinations on March 15.

Here’s what you need to know to get your jab.

How do I book an ­appointment?

You can make your own appointment, or have a friend or family member do it for you.

Booking information — including health authority contact details, complete call-in schedules, hours of operations and step-by-step instructions on how to call to book an appointment — will be available on March 8 at gov.bc.ca/bcseniorsfirst.

The government has promised that seniors would also be able to book their appointment through their health authority call centre. The Island Health call centre can be reached at 1-833-348-4787. It will be open 7 a.m. to 7 p.m., seven days a week.

People should only call in when they are eligible. Anyone who misses their age-based dates can call, book and be vaccinated at any time after they become eligible.

What information will I need to provide when I call?

The call centre will ask for your:

• Personal health number (PHN), found on the back of B.C. driver’s licences or B.C. services cards.

• Contact information, including an email address or phone number to receive texts.

When can I get vaccinated?

Vaccinations for seniors 90 and older and Indigenous peoples 65 and older who are not living in independent living or seniors supportive housing will start on March 15.

Seniors 85-89 will start receiving vaccinations on March 22. Those 80-84 will follow a week later.

Vaccinations for the general population are expected to take place from April until September. The vaccines will be administered by age in five-year increments, starting with people ages 75 to 79.

The provincial government provided this estimate of when appointment slots would open for various age ranges:

— With files from Scott Brown and Katie DeRosa

Ontario says 11 more people have died from COVID-19 with new cases dropping to below 1,000.

As of the latest update, 6,997 people in the province have died as a result of the virus since the pandemic began last March.

The province said 677 people remain in hospital with 284 of them in ICU.

Another 22,326 doses of the COVID-19 vaccine were administered, bringing the total number of vaccines given across the province to 727,021.

Ontario reported seven additional cases of variants of concern, bringing the provincial total number of cases up to 572.

NHL’s four most surprising teams of 2021 and what makes them tick – Sportsnet.ca